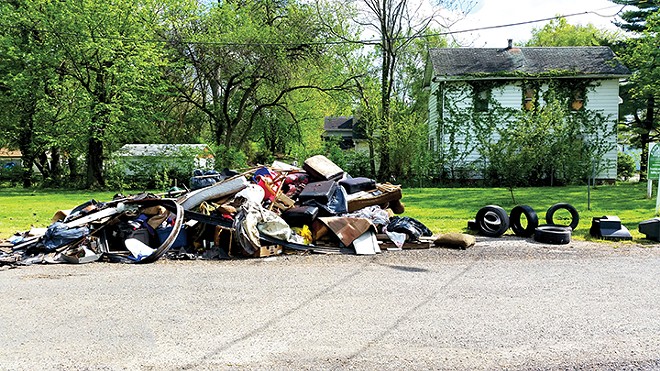 Garbage collected from alleys and vacant lots in Enos Park during SIU School of Medicine’s annual Day of Service.

My nephew recently brought up the subject of the president at a family event with the seemingly destructive goal of instigating.  His loud and bold statements could either be argued for or against, depending on which facts you chose to ignore.

I'm going to tell you which facts matter to me in Springfield, Illinois.  The fact that garbage is profusely scattered up and down alleyways impacts me and you and my nephew, up close and personal.  Whatever the president is doing a thousand miles away may seem to impact us somehow in our overactive imaginations.  It may give us power to harass and bully our family about how great or terrible he is.  Meanwhile, I call the city week after week about the trash.

I appreciate that the city has a tough job dealing with people who pile up 50 bags of trash next to their house and leave it crawling with roaches, bed bugs, mice and rats.  My strongly held opinion is that those alleys of garbage are far more important than the drama in the White House.  If all you Trump lovers and haters could take a break from worrying about behavior that does not directly impact your life and call the city about its trash policy, I think that would be a much better use of your energy.  It is a public hazard for trash to fester and feed vermin.  Let's apply zero tolerance policies to something that truly impacts the community.

During the recent hallowed season, the celebrations of Hanukkah and Christmas overlapped – a happy concurrence.   On Christmas Eve, it is a UU custom to welcome the candlelight and inspiration of various religious traditions onto one common altar.  Among these, light radiated forth from a menorah, an ancient and honorable candelabrum.

The symbolism of such inclusion is especially urgent during this era of lengthened shadows, figurative and literal.  Throughout history, the Jewish community has endured countless indignities and horrors.  During recent years, we have witnessed a surge in crimes committed against our Jewish neighbors and friends here in the US.  The media has been filled with reports of attacks and murders, the desecration of their cemeteries, vandalism of synagogues and the defilement of sacred Torah scrolls.  Meanwhile, the number of Holocaust deniers continues to grow.

It is my sincerest prayer that people of faith do not become indifferent or distracted to this sinful situation but seek to redress it.  May our hymns that extol a vision of peace on Earth and goodwill to all bear rich fruit even after the holiday season.

I saw the IT article regarding LGBT history ("Teaching LGBT history," Dec. 12) and thought the public might be interested in the following.  Over the past two months I have been conducting oral history interviews of Springfield's LGBTQ community.  So far I have interviewed both closeted and openly gay and bisexual individuals. Some interviewees are anonymous while others are not.  I've also had the privilege to interview a young transgender adult and two partnered members of the community who identify as gay and lesbian, along with a prominent local drag queen.

We've discussed subjects such as faith and what life is like from a 20-year-old's worldview in relation to transgender identity.  I've conducted professional oral history interviews before and these particular interviews will eventually be donated to the Sangamon Valley Collection at the Springfield Public Library, for anyone interested in using them for local research.