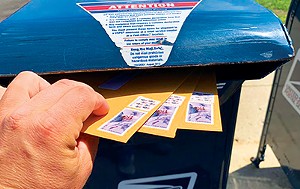 I mail letters to get results.

This month, I noticed a leak under my kitchen counter and called a plumber. He told me how much it would cost and asked for payment in advance. Over the next week, plumbers visited our house multiple times but the project was never quite done.

My wife and I were sick of the continual visits without resolution. So, I went to the hardware store, bought some parts and finished the project myself.

I then sent a letter to the CEO of the Collinsville-based plumbing contractor relating our experience and asking to be reimbursed for the cost of the $23 in parts I purchased. He did me one better and mailed a $400 check, compensating me for the inconvenience of the multiple visits and my own labor.

My dad taught me about the power of letters many years ago. When he was a young farmer in the 1960s, railroad workers would clean out boxcars near our field. Swarms of rats would leave the trains and devour rows of our crops.

Dad went to the Galesburg Public Library and looked up the name and address of the CEO for the Burlington Northern railroad. He typed a letter explaining the problem and asked for it to stop.

The crews quit cleaning out the railcars at that spot and the rats disappeared. Sometimes you just need to ask.

In July, I took my family on a trip. We arrived at the airport early but the person at the ticket counter was new and couldn't quite figure out how to check our luggage. We stood at the counter for more than an hour and eventually missed our flight. We also were charged for 15 or 20 bags when we only had five.

We ended up driving from Springfield to O'Hare International Airport to catch an alternate flight. I wrote a letter to the CEO of United Airlines explaining the situation and was reimbursed $3,000 for our trouble.

In 2020, our two Labrador retrievers became violently ill after eating dog food. They were vomiting blood. My wife, a veterinarian, thought they could die. They ended up spending two nights in an intensive care unit. We believe a toxin caused by mold was in the bag of dog food.

So, I sent a letter along with the vet bills to the CEO of a giant pet food company. They responded with a check for $3,000.

These experiences happened in a little over a year and they illustrate the power of letter writing.

Here are my rules on how to write a letter that gets results:

• Aim high. Write the letter to someone with the power to solve your problem – and that usually isn't anyone in customer service. I start with the CEO or owner of the company and let them delegate.

• Always write a letter – not an email, text message or social media post. Send an honest-to-goodness epistle in an envelope adorned with a stamp. When it comes through the U.S. Postal Service, it is taken more seriously and is less likely to be ignored.

• Stick to the facts and present them in a reasonable, non-emotional manner.

• Never threaten legal action. If you do, the letter will be shuffled off to the legal department where the jackals will use it to line their litter box.

• Bolster your case with supporting evidence and attach corroborating documents such as receipts and medical records.

• Make sure the letter is typed and the grammar and spelling are excellent.

I'd also suggest that one not only write letters to help themselves but to help others. Back in 2019, I upgraded my hearing aids to ones that are compatible with my cellphone. I offered the old ones to anyone in need and ended up giving them to a woman suffering a 50% hearing loss who cleans houses for a living and cares for her elderly mother.

Unfortunately, the store where I bought them wanted to charge $650 to reprogram them for her to use.

So, I sent a note to Bentonville, Arkansas, to one John Furner, the CEO of Sam's Club. I explained my predicament and my desire to help someone. The next morning, I received a call from his assistant informing me they would waive the $650 fee and would provide a gift card to cover the cost of six months' worth of batteries for the woman in need.

A well-placed, persuasive letter can benefit many people.

Also, I write letters to CEOs not just to complain, but to praise when things go well. Last summer, a nurse at my doctor's office really went out of her way to help my family through a predicament. I thanked her and sent a letter to Ed Curtis, CEO of Memorial Health System.

He contacted her and praised her for her conscientious effort. For the nurse, I'm sure that letter from the boss carried more weight than anything I would have written.

Be curious, not judgmental