Keep equity at the center of ecology and technology 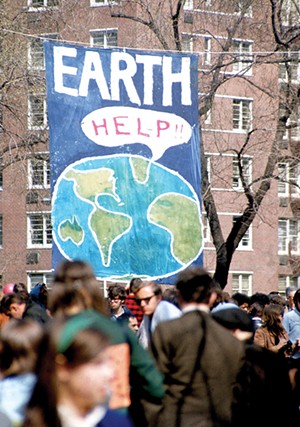 While the climate crisis is certainly an all-hands-on-deck emergency, we should not be narrowly focused on technology as our sole path out of this mess.

I understand the fear that only a miracle can save us. There are terrifying reports about the existential threat of climate change coming out all the time.

But it was rampant capitalism that created the conditions that led to the climate crisis that we are now trying to fix. To fight climate change, we need to use technology as a tool, not a solution.

Climate change hits communities of color and low-income communities first and worst due to systemic racism and intentional disinvestment. The machines of industrialization were deliberately placed in these communities, locking in pollution and harming residents' health for generations. Technology can't solve that, but community-led policymaking can.

Against these overwhelming challenges, communities have identified creative ways to tackle climate change. Our work at the Greenlining Institute over the past three decades has shown that when communities lead, results follow. We've worked in coalitions to advance community-led solutions to climate change, creating models for climate action across the globe.

Our transportation system is the largest source of air pollution in the United States, with environmental and health hazards hitting low-income communities of color the hardest. Systemic racism limits access to affordable and efficient transportation for people of color, exacerbating disparities when it comes to the impact of pollution.

Towards Equitable Electric Mobility, another Greenlining Institute Project, brings together advocates and community leaders to advance state and local level policies and programs that foster a more sustainable and just transportation system, as has happened in Colorado, Illinois, North Carolina, Virginia and Michigan.

When programs that promote the use of alternatives to fossil fuels in transportation are designed to maximize environmental and economic benefits for historically underserved communities, they work better for all communities.

Another community-based effort, Green Raiteros, is an electric ridesharing program – or an "Indigenous Uber" as Huron Mayor Rey Leon calls it. Volunteers use the program's electric vehicles or their own to drive fellow residents to access medical appointments or other services in exchange for a small fee. Greenlining helped the program secure early resources and technical assistance.

Operated by a local nonprofit with support from a coalition of community stakeholders, Green Raiteros serves predominantly low-income Latinx residents, many of whom are farmworkers. They endure some of the nation's unhealthiest air – and highest transportation costs.

We can accelerate progress, innovation, and, yes, even technology, to tackle climate change. But without equity at the center, we stand to replicate the harms of the fossil fuel economy.

If we start with the voices and priorities of people most impacted, we can withstand the climate disasters heading our way, and advance an ambitious long-term climate agenda.

This year, we're celebrating our 52nd Earth Day. Let's get this one right.