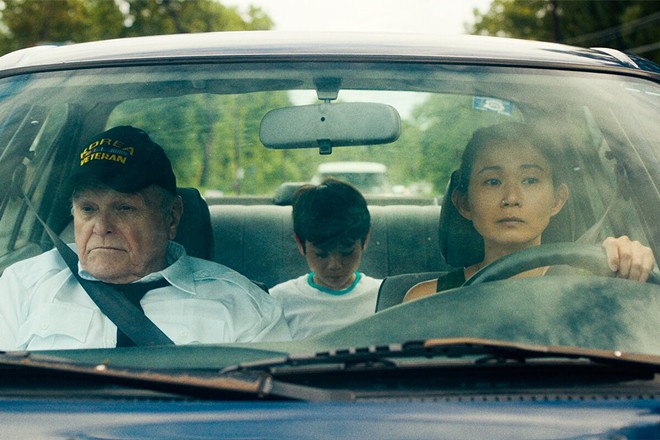 Andrew Ahn's Driveways is a quiet little movie, one that sets out to tug at your heartstrings and succeeds in doing so. Thankfully, it accomplishes this without laying on the sentiment too thick. Instead, a trio of subtle performances wind up getting under the viewer's skin, turns that prove effective because they lack grand pronouncements and larger-than-life gestures, focusing instead on reactions and silence. One of the final screen credits for the late Brian Dennehy, the film provides him with a role that's right in his wheelhouse, one in which he's able to convey much by doing very little, the actor's innate presence lending a gravity to the part and the movie that hold them both in good stead.

Taking place in upstate New York, mother and son, Kathy (Hong Chau) and Cody (Lucas Jaye) have come to clean out her sister's house after her sudden death. It's a project that's full of surprises as the siblings have long been estranged, not having talked in years. Come to find out, the deceased was a hoarder, leaving behind rooms that are so cluttered, Kathy and Cody are forced to sleep on the porch. Korean War vet and widower Del (Dennehy) lives next store and the first encounter between him and his temporary neighbors is less than auspicious. However, circumstances occur that allow the trio to grow a bit closer, necessity driving each toward letting down their guard and asking for help.

You can see where this is headed from the start and Ahn wisely doesn't belabor any of the obvious story points he's required to cover. He knows we're traveling a familiar narrative road, so he keeps things moving at a nice pace, the film clocking in at under 85 minutes. Though predictable, the movie is not without its charms or minor surprises. Jaye is very good and avoids many of the pitfalls young performers run afoul of. He has a naturalistic approach that makes him wholly believable – you never catch him acting - which goes a long way towards our empathizing with Cody's troubles. His father is nowhere to be found and the kid is prone to anxiety attacks that lead to vomiting. He's a quiet, withdrawn boy who finds solace in video games and books. Jaye effectively conveys that Cody is an old soul, convincing us that he'd much rather hang out with the codger next door than most kids his age.

Old pro that he was, Dennehy knew how to underplay a scene with the best of them and he manages to do so throughout. Always a physical actor, he used his size at times as a way to dominate a scene, to project a sense of power that just had to be seen and not used. Here, he uses his size as a barrier, as Del shelters Cody, his instinct to protect taking over. His tenderness belies his obvious strength to poignant effect throughout.

The only surprise in the film is the fact that screenwriters Hannah Bos and Paul Thureen show restraint during the third act, not opting for a tragic end that seems in the cards. Though the conclusion proves much too abrupt and will likely leave the viewer with the sense that Ahn left a scene or two on the cutting room floor, there's enough emotion present to leave the audience genuinely moved without being overtly manipulated. Driveways is the sort of movie that's often overlooked, yet thanks to the solid work from its three leads, this small film with a big heart is worth seeking out.

Authentic Bull one of year's best

Authentic Bull one of year's best