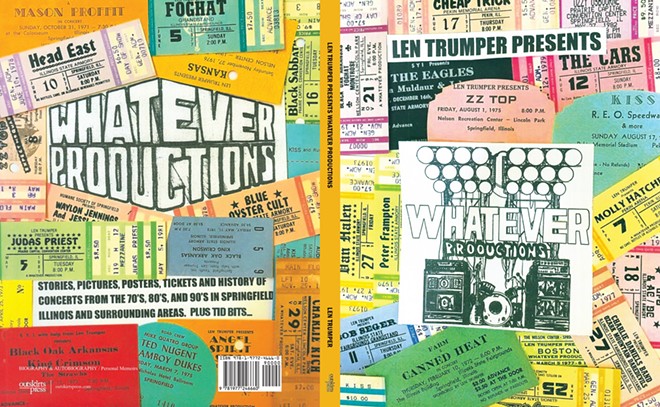 Len Trumper signs and sells copies of his book this Saturday at Motorheads (1-4 p.m.) and Monday at Penny Lane (4-7 p.m.).
Hello there. Won't you come on into our mid-November, pre-Thanksgiving episode of Now Playing, covering the last weekend before the holiday rush of 2021. We have plenty going on in our live music world and some tidbits from those out there doing something out there.

From festivals with all local bands to concerts by the biggest names in showbiz, Len Trumper's Whatever Productions was responsible for booking many of the live concerts held in Springfield and surrounding areas during the 70s and 80s. He brought them to various city locations, including the State Armory, Nelson Center, Illinois Building, St. Nicholas ballroom, Griffin High School, State Fair Grandstand and many other venues. I could go on and on, as I remember being at many of these shows, but this is to announce that Len's book we mentioned here recently is now available to the general public. This week he will be selling and signing Len Trumper Presents at Motorheads from 1 to 4 p.m. on Saturday and at Penny Lane on Monday from 4 to 7 p.m.

The book will be for sale at Recycled Records and Penny Lane for now, and at other locations as Len gets this book selling thing going. He has hardback and soft cover versions ready for retail (and some T-shirts, too) and it's an amazing tale of what one person can do and did to make something happen. Congratulations to you Len, for getting out this record of your accomplishments and to provide Springfield with a bit of history lesson of what went on back then. Online info is available on Facebook at Len Trumper's Whatever Productions and the book is also for sale at Amazon, Target and Barnes & Noble, but Len prefers you buy local, if you can.

In more news from area folks on the move, Stella Cole, a Springfield native now living in New York City, hit some big numbers on TikTok this past year (over 250,000) and that brought her to a cool, good deal. Along with her songwriting cohort Emma Scotson, Stella worked with Grammy-award winning producer Dave O'Donnell to record several songs with a two-part EP of original compositions, "Fine" and "Invincible," set to be released this Friday, Nov. 19 on Spotify, Apple and Amazon Music. Way to go, Stella. Did you happen to rub Abe's nose for good luck some time ago? After hearing Stella sing, even old Abe's nose would know she doesn't need luck, just the opportunity to be heard, which she got and will now get even more of in the coming days. We expect to hear much more in the times ahead from this extremely talented and very personable singer extraordinaire from Springfield, Illinois.

In another local TikTok success story, John Runions, father of the drummer in Unchained, a combo from Rochester that won our recent Best of Springfield Original Band category, posted a video last May called "turning my basement into a nightclub" that went viral. Now clocking in at some 63.5 million views, John parlayed the attention the time-lapse video received into a bonus for Unchained by landing a connection with JRIch ENT, an audio engineer with a Grammy nomination credit, who has worked with the likes of Cardi B, Kanye West and Post Malone. For now, Unchained is being shopped to festivals for 2022 shows by JRich and the company he works with, Ekho Management, but the sky's the limit when things start to happen for these guys. Awesome job, dad, that's the way to do it. And good luck on getting the nightclub rocking, too.

Remember to check all our listings for cool stuff happening this week around town.