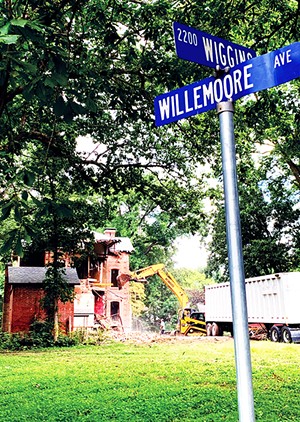 PHOTO BY KAREN WITTER
Demo day 3, Tuesday, Aug. 17.
Last week Illinois Times reported that demolition of the historic old Leland farm house on the corner of Willemoore and Wiggins in Leland Grove appeared to be imminent. By Thursday, Aug. 12, heavy equipment was on site. The ground was scraped clean as vegetation was cleared from around the home. Yellow tape circled the large trees to be left standing. On Friday demolition was well underway.

There was no wrecking ball knocking the house down into one big pile of rubble. The house is coming down slowly, bit by bit, as skilled contractors maneuver a huge Kobelco excavator. The giant jaws grab pieces of metal and drop them into a pile, tear out the wood and shatter glass and move mouthfuls of materials into a heap of rubble destined for the landfill and knock down the bricks which are scooped into a big truck and hauled away. Salvage and demolition are being carried out by Modern Paving, Scrap & Demolition of Springfield, according to a sign on the property.

Many people pass through Leland Grove every day on some main arteries such as Cherry Road and Laurel Street. But this little stretch of Willemoore where it meets Wiggins is off the beaten path. Typically, car traffic is minimal; neighbors are out walking, often with their dogs. On Thursday and Friday, Aug. 12 and 13, there was a steady stream of cars slowly circling the block. Many had the Illinois Times article on the front seat of their car. Residents who live within walking distance came to stand and watch and chat with each other as demolition got underway.

I've lived in Leland Grove for 34 years. Over the years I've spent a lot of time walking and running through the neighborhood and nearby Washington Park. Virtually all of this area was once part of the Leland Farm, and the historic Leland House has been a significant feature of Leland Grove, beloved by many residents. Tearing down the house is itself an historic event, and I wanted to witness and document this firsthand.

Slow-moving cars crept through the neighborhood. People rolled down their windows and stopped to watch and to comment on what they were seeing. Some were just curious. Some were neighbors who had admired the house for years. Some were interested in historic preservation. Others were longtime Springfield residents, mourning the loss of an important part of Springfield. "Sad" was the most common word I heard. "Why?" was another. I heard this from someone driving by: "It's the beating heart of this area.  Can't they see that?"

One woman came to see the historic home because she remembered her mother ironing for people in this area when she was a child. Two originally from Ukraine who have lived in Springfield for nearly 30 years lamented this loss of history. Several people remarked that this is how we do things in Springfield – recalling when the Orpheum Theater was torn down. Some neighbors were noticeably absent, telling me later that after walking by the home for the last 40 years they simply couldn't bear to watch the demise of this iconic landmark.

A woman with a clipboard was engaged in a conversation with the contractors. She walked back to the street and identified herself as being from the Illinois Environmental Protection Agency (IEPA). She said someone had contacted the IEPA, most likely in a last-ditch effort to try to halt the demolition. She explained that IEPA had no jurisdiction, as residential demolition is exempt from IEPA regulations.

The property owner, Frank Vala, is within his legal rights to demolish the house. However, some passersby had read minutes of Leland Grove city council meetings and faulted the community for doing nothing previously to officially recognize the historic significance of the property, which may have afforded some protection. Some were chagrined that the previous owners let the property deteriorate. Many had questions about the cost and whether restoration would have been feasible, but regretted that the house was never put on the market. There was no opportunity for someone interested in preserving and restoring the house to make a bid. Others were dismayed that there was no architectural salvage operation to allow local historic preservationists to take items for reuse in other historic buildings. Vala is, however, offering to give the small brick summer kitchen to a historic preservation group to move.

While bricks were falling at one end of the house, curtains were still visible at the windows on the opposite side – a poignant reminder that the house was a home for many years. The machines were silent over the weekend. Demolition will continue, methodically, in the days ahead.

There are no plans for a new house on the site. Vala has stated his intentions to turn the property into a yard for his extensive adjacent property. One person may have said it best. Given its historical significance, once the Leland House is a vacant lot, Leland Grove should change its name to simply, The Grove.

Karen Ackerman Witter grew up in Springfield in Pasfield Park and has lived in Leland Grove for 34 years. She retired from the Illinois State Museum after 35 years in state government in leadership positions involved with natural resources, museums and public policy issues. Her career accomplishments were based on the belief that natural and cultural resources and the arts enrich people's lives and build strong communities.