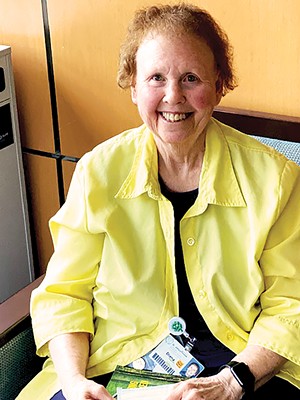 PHOTO BY SCOTT REEDER
Dee Stern, a chaplain at HSHS St. John’s Hospital, recently wrote a book on grief, Comforting the Bereaved Through Listening and Positive Responding; What are the Bereaved Trying to Tell Us?

Grief is a strange thing. You never get over it. You just learn to live with it.

I was thinking about that this month when I wrote a story about Dee Stern, a woman who works as a chaplain at HSHS St. John's Hospital in Springfield.

She has just written a book about helping grieving people, Comforting the Bereaved Through Listening and Positive Responding.

She has all kinds of terrific advice for what to say and not to say to someone who has suffered a loss.

For example, never say someone "committed" suicide, Stern said. She said the word "committed" conjures thoughts of a criminal act, which suicide is not.

She recalled a lady whose son ended his life and someone went up to her and patted her on the hand and said, 'I'm going to pray for you because your son's been damned to hell.'"

Stern said that is an example of what not to say.

Grieving people need a listening ear more than advice, no matter how well-intentioned.

As I chatted with Stern, I kept thinking of my own father. When I was growing up, Dad was one of the least empathetic people I knew. He was a good man, but he was often oblivious to the pain around him.

I remember one time when I was 11 or 12; we were vaccinating hogs and his needle was flashing by, going from one patient to another. The syringe missed the pig's flank and embedded in my thigh.

"I exclaimed, 'Dad, you gave me the shot!' He grunted and gave the dose to the intended patient. The farmer who observed the interaction still laughs at my father's response.

He didn't say "I'm sorry," or acknowledge the pain he inflicted. (I still wonder what swine disease I've been immunized for.)

Dad was a doer, not a listener. If a neighbor died, he'd be one of the people who volunteered to help harvest the crops at no charge to the widow. But if it came to sitting and listening to the widow talk about how much she missed her husband, he was quite uncomfortable.

When I was a young reporter in Galveston, Texas, in the 1980s, the world was in the midst of the AIDS crisis. Being the local newspaper's medical reporter, I wrote a series on the devastating effects of the disease on the city's gay community.

I found myself, notebook in hand, attending a grief support group for men infected with AIDS. When I mentioned my assignment to my father, he exclaimed, "Don't breathe too deep when you're around them."

My dad was a veterinarian. He knew the virus was spread by bodily fluids, not the air. But what creeped him out was the idea of people sitting in a circle and talking about feelings.

After I had published the piece and my parents had read it, my father kind of grunted and didn't have much more to say. That's how he dealt with things that made him uncomfortable.

Looking back, I still want to weep for those young men who all surely succumbed to the virus.

One day my mom told me that my dad had volunteered to work as a grief counselor with the Stephen Ministry at our church in Galesburg. When she told me this, I thought it was the worst matchup ever.

But sometimes God calls us out of our weakness, not our strength.

During the decades he volunteered as a grief counselor, I saw him change. He developed empathy, not just for those he was counseling, but for humanity as a whole.

He became a caring, empathetic individual. He spent hours every week visiting the bereaved and just listening to them talk about their loss. He took classes in what to say and what not to say.

One of the things he shared with me is to never ask someone why something happened. It comes across as judgmental. To this day, I have no idea who the people were he counseled.

I can say with certainty that the person most changed wasn't the one being counseled, but the one doing the counseling. He became an empathetic listener.

Could it be, when we give we receive more in return?