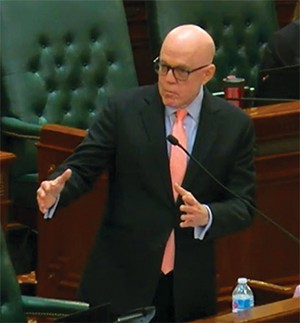 Photo courtesy Blueroomstream.com
House Majority Leader Greg Harris, D-Chicago, outlines the Democrats' operating budget for the upcoming fiscal year on the House floor just before midnight on Monday, May 31.
Illinois lawmakers worked into the early hours of Tuesday morning, June 1, to pass a $42.3 billion state budget plan for the upcoming fiscal year that Democrats say would fully fund K-12 education and the state's pension obligations while also paying down a sizeable portion of the state's debt.

Lawmakers have been working on the budget since Gov. JB Pritzker delivered his proposal in February, and it passed on mostly partisan lines.

The job became easier with better-than-expected tax collections this year, as well as passage of the federal American Rescue Plan Act, or ARPA, which will provide about $8.1 billion that the state can spend over the next four fiscal years. Lawmakers said they plan to use the money for one-time projects such as affordable housing development, public health improvements, violence prevention programs and infrastructure projects.

Republicans, however, complained that the infrastructure spending was entirely directed by Democrats.

Presenting the budget to a committee Monday afternoon, House Majority Leader Greg Harris, D-Chicago, contrasted the situation Illinois faces now with the dire conditions it faced one year ago at the height of the COVID-19 pandemic.

"Here we sit today. We are back in our state Capitol," he said. "We have vaccines. The world is beginning to open back up. We are seeing a bright, sunny day outside and there's a lot to talk about that we have accomplished in the last year as a state that has put the state of Illinois in a far more stable place financially and a responsible place fiscally."

Highlights of the proposed budget include increasing funding for the evidence-based funding plan for K-12 public schools by $350 million, bringing the total to $9.2 billion.

In addition to those regular items, Harris said, the plan calls for spending about $2.5 billion of the ARPA federal money Illinois expects to receive. Of that, $1.5 billion would go for things like economic recovery programs to help businesses hardest hit by the pandemic, public health, affordable housing and violence prevention programs like after-school activities, and summer youth employment.

Another $1 billion of the ARPA funds would be directed into the ongoing Rebuild Illinois capital improvements program to accelerate some of the projects slated for construction.

That stirred controversy in a House committee when Rep. Tom Demmer, of Dixon, the chief budget negotiator for the Republican caucus, asked how the $1 billion in capital projects had been selected.

"Through the normal process by which all capital costs of projects are chosen," Harris said. "Members make requests and departments make requests, and they are fulfilled within an order depending on the category. For instance, IDOT has a five-year plan, members might have a request where they have a first, second, third priority. And as funds are available, they would be funded."

Demmer then asked whether any of the requests had come from Republican lawmakers and Harris replied that he didn't know of any.

"We have a billion dollars of new capital projects that have been available, but it appears that it was only known that those projects were available or eligible for requests from Senate Democratic and House Democratic caucuses," Demmer said.

"Certainly would be happy to talk," Harris replied.

Demmer raised the same concerns during the floor vote.

Harris also said the proposal calls for paying down about $2 billion of bonded indebtedness as well as paying off all of the state's internal, or "interfund" borrowing.

Republicans opposed the plan because it also relies on eliminating or delaying the implementation of roughly $660 million worth of corporate tax cuts and business incentives, which Democrats have termed corporate "loopholes."

One of those calls for delaying any further phase-out of the corporate franchise tax, which was a concession Democrats had made to Republicans in 2019 to reach bipartisan agreement on the budget and a $45 billion "Rebuild Illinois" capital improvements plan.

The budget bill passed the House minutes before midnight, 72-24. But it took until the early hours of Tuesday morning, June 1, for the package to come up for a vote in the Senate, thereby triggering a constitutional requirement that it pass by at least a three-fifths majority, or 36 votes.

It passed the Senate with 37 votes after a short debate during which Sen. Chapin Rose, R-Mahomet, called it "an unparalleled spending spree of epic proportions."

He specifically noted the limited contributions to the state's unemployment trust fund, which he said had a deficit of about $5 billion due to the COVID-19 pandemic, while the budget only contributes about $100 million to that.

But Sen. Elgie Sims, D-Chicago, who chairs the Senate Appropriations Committee, defended the spending plan for its investments in health care, youth employment and a host of other services.

"This budget absolutely funds our priorities," he said, "because we are fighting for individuals who cannot fight for themselves."

The budget package next goes to Pritzker for his consideration.

Illinois announces first $24 million in Back to Business grants

Session ends with major legislation, but no energy bill