How The Outlet launched Brendan Barnhart

Brendan Barnhart of Springfield graduated from Lanphier High School last spring and now is a freshman at Lincoln Land Community College majoring in psychology. He is also taking introductory Japanese. His goal is to move to Japan and teach English. Barnhart's interest in Japan stems from his love of Anime – Japanese hand-drawn animation – and the Japanese show "Kamen Rider." Barnhart is an example of how The Outlet influenced a young man and put him on a pathway to success. Prior to joining The Outlet, he was shy, awkward and unsure of himself.

Barnhart admits that he can be mean and blunt sometimes. He describes The Outlet as an amazing program and credits "Mr. Mike" with doing so much to help people who have struggled. Barnhart says he used to stay right by his mother's side and now he is more willing to talk to other people. He says his mom wanted to make sure that he did well in life. The Outlet became the place he could hang out, have fun, be with people he knew and not worry.

Barnhart first met Phelon at the Boys and Girls Club, but it was several years later that he got connected with The Outlet. He was at his cousin's graduation. "Mr. Mike was there. He talked to my mom and said I should go," says Barnhart. In addition to having fun and hanging out, he had help with homework from mentors. He also went on college tours and The Outlet's first trip to Memphis to visit civil rights sites. Barnhart recommends that others try out the Outlet.

Barnhart attended numerous public schools in Springfield. He first went to Southern View, then Black Hawk and Pleasant Hill. When Pleasant Hill closed, he finished the rest of elementary school at Feitshans. He attended Washington Middle School and Lanphier High School. There were no clubs at Lanphier that interested him, and he entered The Outlet right before his freshman year.

Barnhart still likes to go to The Outlet as often as possible and in the future would like to try mentoring others. When asked if he is a role model for others, he responds that Mr. Mike seems to think so.

Phelon credits Barnhart with overcoming a lot of challenges. "He continues to beat the odds and flourish," says Phelon. Barnhart isn't the only beneficiary of this relationship. Phelon is a beneficiary as well, remarking tearfully that "these boys have taught me patience and what it means to be a dad and be a friend." –Karen Witter 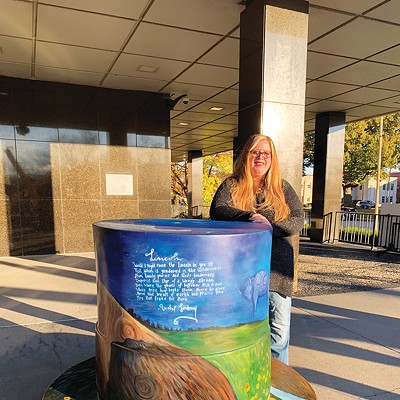