Both seek GOP nomination for the 95th House District, no Democratic candidate 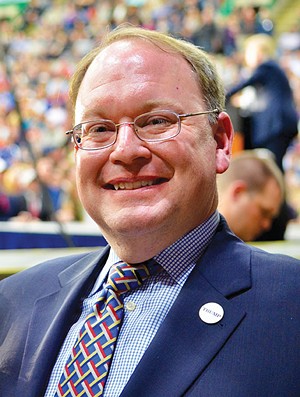 State Rep. Tim Butler, R-Springfield, faces a challenge in the Republican primary from Kent Gray, a candidate with more baggage than Samsonite.

Both men are seeking the GOP nomination for the 95th House District. The race in the Republican-leaning district will almost certainly be determined in the primary. In fact, there is not yet a Democrat on the ballot, although party officials can place someone in the spot before the November general election.

Gray, 52, is a Springfield-area lawyer who had his law license suspended for one year, beginning in December 2018. He owes back property taxes for his Leland Grove home. And by his own admission, he's behind on child-support payments for his two children.

"The Illinois General Assembly already has enough ethical challenges without electing someone like this," Butler said of his opponent.

Gray said the Sangamon County Republican Party establishment hates Donald Trump and consequently is opposed to him because he supports the 45th president and once managed his Illinois campaign. He added that his opponent is a "Never Trumper."

Butler said, "I don't know where he gets that. I voted for Donald Trump both times. I think he (Gray) is just looking for some wedge issue to use in this race."

Butler, 55, has served seven years in the Illinois House.

Gray served 18 years as a Lincoln Land Community College trustee but was defeated in 2017 when seeking to be reelected to the unpaid post. He also has run unsuccessfully for state representative, circuit judge and Christian County state's attorney.

Both men identify as pro-life. Butler said he would make an exception for abortion for those who are victims of rape or incest and when a mother's life is in danger. Gray said he would not make any exceptions.

Gray said he is offended that Butler voted in favor of increasing gasoline taxes, but Butler said the revenue increase was necessary to repair roads and bridges throughout the state.

"Our state desperately needed those improvements and the state constitution doesn't allow for money to be diverted from the road fund. We could be assured the money was going to go where it was supposed to go. So, I supported it. That said, it's pretty hypocritical for (Gray) to be criticizing me for raising taxes. During the time he was on the Lincoln Land board they raised property taxes by 86%."

"He is hoping for a miracle, and he has it all hanging on his connections with Trump," he said. "I think fair-minded, independent Republicans will see past that. ... Also, there have been issues in Kent Gray's personal and professional lives."

Gray does not live within the confines of the newly redrawn 95th district, which encompasses much of Springfield. If he were to win the race, he would need to move to the district.

Gray, who lives in Leland Grove, said, "My response is rather 'Palinesque.' I can see the 95th District from my front yard." Former vice-presidential candidate and Alaska Gov. Sarah Palin once noted that Russia was visible from parts of Alaska, which became the infamous "I can see Russia from my house" line with Tina Fey portraying her in a "Saturday Night Live" parody.

Gray said the back taxes for his home were purchased at auction. He said he views the situation as more of a loan than a transgression, noting that he just has to pay the person owning the debt back at a 9% interest rate.

"I'm in a situation where I'm cash poor but asset rich," he said.

So, how did he get in such a predicament? He points his finger at his ex-wife and her attorney. His license suspension stems from his divorce case.

"A global pandemic and a one-year suspension on one's legal license are pretty detrimental to one's earning potential," Gray said.

The disciplinary arm of the Illinois Supreme Court recommended that Gray be suspended from practice for one year for lying in court and practicing law without a license.

The Illinois Attorney Registration and Disciplinary Commission found that Gray lied in 2015 when he told former Sangamon County Associate Judge Steve Nardulli that he was unable to obtain transcripts of federal tax returns for five tax years dating from 2010 to 2014 because of a glitch in the Internal Revenue Service's transcript retrieval system.

"This court is alarmed that a practicing attorney has not filed income tax returns or paid income tax for a five-year period," Nardulli wrote in a court order.

In an interview June 13, Gray said today he owes nothing in income taxes. He added that the Internal Revenue Service owes him money. Gray disputes the ARDC finding that ultimately resulted in the suspension of his law license.

Gray admitted that he is behind in paying child support for his two children who are 12 and 16, but he added that he hopes to have a judge adjust how much he needs to pay because his former wife's income has gone up, while his has gone down.

"I've paid my lovely ex-wife hundreds of thousands of dollars. I am a little behind on the last of maintenance and the last of the child support. We have been in an ongoing legal battle over what the proper amount is for child support. And, we've actually got a court hearing in July on what that amount should be," he said.

This story was updated to correct the length of time Kent Gray served on the LLCC board and to clarify that he disputes the ARDC findings.