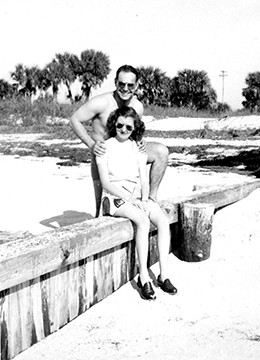 Photo courtesy of the Abraham Lincoln Presidential Library and Museum
Kenny and Bonnie in Florida.
I found Kenny’s Bonnie living in an assisted living facility. It has been more than 70 years since she sat on the beach in Florida in her sunglasses and white shirt, Kenny’s hands on her shoulders behind her. She is 93 years old now; her dark curly hair has turned white; her eyesight is failing. A lifetime has passed since she last saw her husband.

I wasn’t sure she’d remember him, or if she did, that she would be willing to talk about him with me. But she did remember, and she told me all about him. This man who died so long ago, the man who’s life I’ve been piecing together through photos and news clippings – she knew him, knew the sound of his voice and what his laugh was like and the way he combed his hair. He was alive to her, and in telling me about him, she brought him to life for me.

Kenny was wonderful, she told me. He was kind and handsome and smart and talented. They were high school sweethearts who began dating when he was a senior and she was a junior. They became engaged when she graduated high school, but had to wait a year to marry while Kenny completed his flight training in Arizona and Nevada.

She worried about him while he was overseas and wrote him every single day. She worried still more when she received the telegram saying he was missing in France. She said “it was wonderful” when she learned he was alive and coming home to her.

She didn’t much care for living in Florida after the war, she said. Too much sand. But she loved being with Kenny. His death was a terrible blow to her; she never believed that he took his own life. 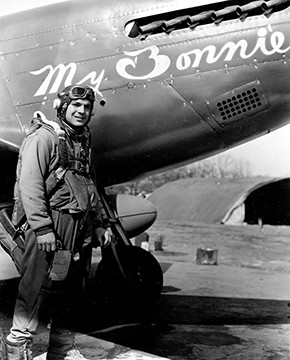 Photo courtesy of the Abraham Lincoln Presidential Library and Museum
Hagan next to "My Bonnie."
After she remarried, she didn’t talk about Kenny very much. Out of respect for her new husband, she put that piece of herself away. “I don’t think many people know I was married before,” she said.

And yet, in talking to her, I saw glimpses of the young woman she used to be; the one who waited and worried while her husband was at war, who saw him come back to her from behind enemy lines only to lose him on a tragic day in Florida. It was clear that even though she lived just six years with him and 73 without him, the 20-year-old war bride she used to be so long ago is still alive inside her, and he is still alive inside her heart. –Erika Holst