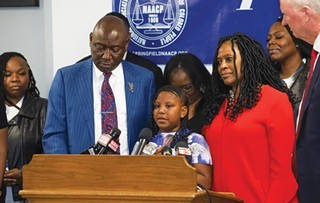 PHOTO BY 1221 PHOTOGRAPHY
Nationally known civil rights lawyer Ben Crump speaks at a Jan. 19 news conference in Springfield NAACP headquarters with Rosena Washington, the mother of Earl Moore Jr., and Moore's niece, Astarr Wright. Crump is representing Moore's family in a wrongful-death civil lawsuit against LifeStar Ambulance Service and a LifeStar paramedic and emergency medical technician. The two LifeStar workers have been charged with first-degree murder in connection with Moore's Dec. 18 suffocation death.
A paramedic who helped transport Earl Moore Jr. to HSHS St. John’s Hospital on Dec. 18 told hospital officials Moore was “combative” before being placed face-down on a stretcher, strapped down and loaded into an ambulance in front of his Springfield home, an Illinois State Police investigator testified Jan. 20.

And an emergency medical technician who accompanied the paramedic told police that he never was trained to not place a patient face-down, or prone, during transport to a hospital and never was told that prone placement put patients at risk of suffocation, the investigator said.

“He was in distress and unable to assist himself to even make it out of the house,” Weishaar said.

The EMT, who had worked as a first responder for more than two decades, received training in May and July on the dangers of putting patients in a prone position, Weishaar said.

The police investigator’s testimony was part of a more-than-three-hour hearing that concluded with Circuit Judge Raylene Grischow ruling there was probable cause to justify first-degree murder charges against the paramedic, Peggy Finley, 44, and EMT Peter Cadigan, 50, in connection with Moore’s suffocation death.

State’s Attorney Dan Wright charged the two emergency medical service workers, both employees of LifeStar Ambulance Service Inc., with murder on Jan. 9. They are being held at the Sangamon County Jail on $1 million bond apiece, which means each would have to post 10%, or $100,000 cash, to be released while awaiting trial. If convicted, they would face prison terms of 20 to 60 years.

Finley and Cadigan pleaded not guilty, and the next hearing in the case is scheduled for Feb. 6.

The murder charges would have been thrown out, at least temporarily, if Grischow had ruled there wasn’t probable cause to charge the two emergency responders, both Springfield residents, in a case that has received national attention.

The Jan. 20 hearing came the day after nationally known civil rights attorney Ben Crump and Texas-based lawyer Robert Hilliard filed a wrongful-death lawsuit on behalf of Moore’s family against Cadigan, Finley and LifeStar, a Centralia-based company that has declined comment. Crump represented the family of George Floyd, who died in 2020 at the hands of Minneapolis police, as well as other Black people – including Trayvon Martin, Michael Brown, Ahmaud Arbery and Breonna Taylor – whose police-involved deaths have fueled the Black Lives Matter movement.

Crump and Hilliard said they believe Moore’s case is the first in the United States in which first responders have been charged with murder in the death of a patient.

Hilliard said he believes the fact that Moore was Black and the EMS workers are white played a role in the rough, rude and ultimately deadly treatment of Moore on body camera footage.

One of Cadigan’s attorneys, Edward Unsell of East Alton, told reporters after the hearing that race wasn’t a factor in Moore’s death.

Forensic pathologist Dr. Scott Denton of Bloomington conducted an autopsy on Moore, a former McDonald’s shift manager, and concluded that Moore died from “compressional and positional asphyxia” because of being placed face-down, or prone, and being tied down tightly by Cadigan.

Wright said Finley is just as responsible as Cadigan for Moore’s death because she was working with Cadigan and in charge when the pair responded to a request by police for medical care. Three Springfield police officers called for an ambulance after they drove to Moore’s home when he called 911 while hallucinating during an episode of alcohol withdrawal.

Moore was pronounced dead by St. John’s officials at 3:14 a.m. Dec. 18, after an ambulance ride that lasted two to three minutes. His blood-alcohol level was .077, or just under the legal limit of .08 for driving in Illinois, according to a toxicology report after his death.

Unsell and other attorneys representing Finley and Cadigan said murder charges were unjustified. The lawyers said the situation was tragic but, at most, justify lesser criminal charges or a civil negligence lawsuit.

“The evidence isn’t just lacking, it’s contrary to that,” Justin Kuehn, one of Cadigan’s attorneys, told the judge. “The acts may have been reckless, but that’s a different charge.”

Wright, however, said evidence in the case, anchored by body camera footage from three Springfield Police Department officers who responded to a 911 call at Moore’s home in the 1100 block of North 11th Street, was more than enough to justify murder charges.

Under Illinois law, Wright said, he doesn’t need to prove Finley and Cadigan had a plan to kill Moore to justify first-degree murder charges or obtain a conviction.

Wright’s charges said the EMS workers “did acts without lawful justification” that caused Moore’s death and that the workers knew, based on their “training, experience and the surrounding circumstances” that their acts “would create a substantial probability of great bodily harm or death.”

Weishaar testified that Finley told him after Moore’s death that transport in the prone position was “against protocols” unless there were medical reasons that she said didn’t exist in Moore’s case.

Once in the ambulance with Moore and before arrival at the hospital, Finley could be heard in a recorded call to St. John’s officials saying she didn’t check on Moore’s breathing and heart functioning because she didn’t want to “poke the bear.”

Weishaar said guidelines for EMS care issued by Memorial Health, the hospital system that oversees LifeStar, a private company, were known by Finley and Cadigan and explicitly prohibit face-down transport of patients. Weishaar said a text message Finley sent to someone after Moore’s death said the incident was “her fuckup,” that she “should have flipped him over” and she “takes full responsibility.”

But Finley’s attorney, W. Scott Hanken of Springfield, said Finley’s knowledge of Memorial’s EMS protocols doesn’t mean she took an action she knew probably would cause Moore’s death. Hanken noted Finley wasn’t involved in placing Moore face-down on the stretcher. Cadigan did that, and he tightened the straps on Moore.

Wright said, “Knowledge of the risk is the mental state.”

Weishaar said it was Denton’s opinion that the two cracked ribs found during the autopsy could have been caused by the tightening of the straps. Unsell told reporters after the hearing that the ribs could have been cracked during cardiopulmonary resuscitation at St. John’s.

Unsell said he disagreed with Wright’s characterization that Cadigan “slammed” Moore face-down on the stretcher.

Unsell added that one of the police officers who helped Moore get to the stretcher told Moore, “You can fall face-first on that cot.”

Wright and Crump, the civil rights lawyer, said police did their jobs properly and shouldn’t be blamed for not intervening because they were trained to hand patients in need of medical attention over to EMS workers when an ambulance arrives.

The three police officers, who haven’t been named, were commended by police department officials and haven’t faced any disciplinary action.

The new details that emerged at the Jan. 20 hearing were “disturbing” but consistent with Moore’s treatment by EMS workers as depicted on body camera footage, Crump and Hilliard said in a statement Jan. 21.

“Had Earl’s vitals been checked during his transport to the hospital, as was standard medical procedure, it would have been immediately apparent that he was in grave and life-threatening danger, from being tightly strapped face-down on the gurney,” the lawyers wrote. “Instead, this man, a son and loving brother, was compared to an animal and allowed to slowly and painfully suffocate inside of an ambulance filled with all the medical equipment necessary to have saved him.”