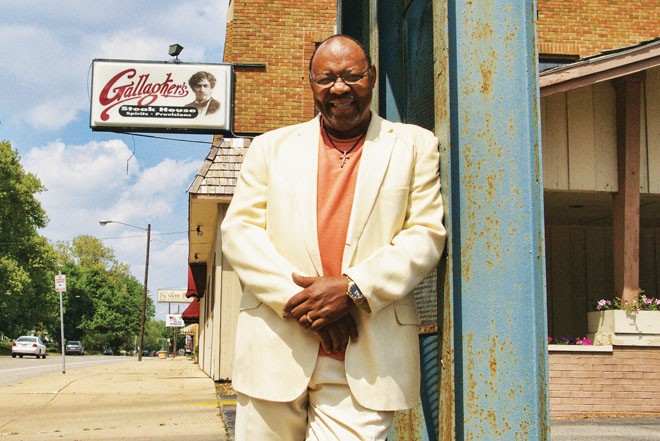 Now a renowned and beloved Springfield-based singer, Johnnie Owens’ voice and talent took him around the world in his younger days. Earlier this week we tried to cover his lifetime in music during an hour conversation while listening to his new CD Butter! in the background at his apartment on Second Street.

Johnnie grew up in St. Louis living within an extended, blended family and had an occasional Chuck Berry sighting. Like many singers, he gained his early singing lessons in church, then gravitated toward popular, secular music as a young man.
“Our minister, when I was growing up had this deep and powerful voice and I asked him, ‘Rev. Peters, how are you able to do that?’ Basically, as a kid I was asking him how do you sing,” said Owens. “And he told me, it’s easy son, just keep your tongue between your teeth, down in your mouth and breathe. So that’s what I did.”

When not involved with sports, the acclaimed high school athlete devoted time listening to music and learning the songs of the day. During a stint in the army, while stationed in Germany, he traveled the continent playing contemporary R&B and pop. After the military released him, the aspiring singer landed in Tacoma, Wash. and continued his run in music through experiences with popular local, original groups (they played the Northwest club circuit), the famous Tower of Power band (he almost landed the lead singing gig, with the offer not coinciding with the timing of other jobs), The Platters (he worked with what’s known as “The Platters organization”), plus did a South Pacific tour that included shows in Australia and New Zealand. He learned a valuable lesson during this vibrant and busy time.

“I was sitting with my buddy Butch having breakfast and everything – he was a drummer, we played together all the time, you know, we were good friends – we were discussing where we wanted to go in music, where it could take us. I looked out, I said, ‘See how that river there, that stream, see how it flows and takes you anywhere? That’s how music is. It can take you wherever you want to go.’ That’s the truth, that’s how I really feel about it.”

In 1982, Johnnie came to Springfield to care for his daughter and stayed. During the ensuing decades he worked several steady jobs, performed regularly in local musical theater, sang with different combos doing jazz tunes, big band songs and some R&B and blues, then quit music for a while. He credits area trumpeter Frank Parker with telling him “he needed to be singing” and for giving him the boost to sing in public again. From there, through the encouragement of the late Scott Waggoner, he ended up in Pogo Studios in Champaign, recording over the last few years with stellar area musicians that resulted in the making of Butter!

“I think that anybody that wants to do this, you really have to pursue it with your heart and soul. Follow your heart and go with your soul,” Johnnie summed up his life in song. “There’s really nothing else to say about it. That’s all there is to it.”

In extra blues news this weekend, the Hard Road Blues Band celebrates the life of Petie, harmonica player Bad Bill Robinson’s mom who passed away recently, with a gig Sunday afternoon at Brookhills Lounge. The Illinois Central Blues Club hosts its first Blues Fall Celebration with Peter Karp and Sue Foley at Casey’s Pub on Friday and James Armstrong Saturday at Thirdbase and finally, Cody Sokolski of Champaign/Urbana’s Delta Kings plays a duo set as Cody and Katie at the Brewhaus on Sunday after Johnnie’s CD release and before our regular set.