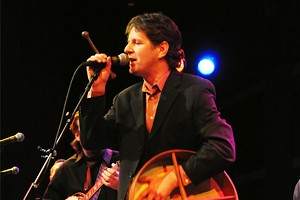 John Byrne Band
John Byrne Band
Born in Dublin, Ireland, and now living in Philadelphia, Penn., John Byrne takes Celtic and American music of folk origins and keeps it alive by continuing musical traditions while making it all sound fresh through original songwriting and covers of the old songs. Playing a mix of self-penned compositions and interpretations of folk tunes, Byrne, a gifted musician with taste and talent, established a healthy niche with good showings on the FolkDJ charts and strong performances in the Northeast with occasional forays into the great Midwest, all while opening for artists as diverse as Ian Gillan and Gaelic Storm. His travels include a recent run all the way to Colorado, and as the band rolls back toward Philly, we get a chance to see the talented singer and guitarist bring his music magic to the stage. The Immigrant and the Orphan, his third full-length CD, came out in September of 2015, and Byrne brings along a band of renown to get it all right with an acoustic four-piece combo featuring banjo/accordion, fiddle/cello, guitars and bodhran.