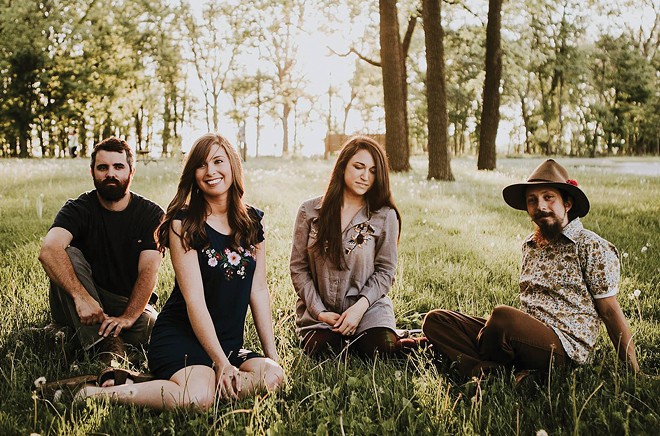 The Chickadee Sermon plays this Saturday at the Positively Summer Music Festival at Sheedy Shores WineGarden near Loami.

June bugs, June weddings, Henry and June, "by the light of the silvery moon" in June, and even Lassie's TV mom, June Lockhart, give us a lot to think about as the sixth month of the year comes along. But here at Now Playing central we consider mostly music. So let's take a gander at what's going on around the area in mid-June, 2022.

First up, let's congratulate The After School Special, an area acoustic duo featuring Aasne Daniels and Jerry Setnicky, for putting out another full-length album of all original material, recorded by John Shepherd at his New Paradigm studio (Shep joined in playing on various instruments as well). The 10-song recording, Follow the North Star, just hit on streaming platforms June 7 and very soon you can hold a CD in your excited hands at an upcoming release party. Watch this space, as the hip folks say, for more information.

Every Thursday for some time now, exceptional jazz guitarist and all-around good guy Jose Gobbo has curated "The Art of Jazz" performance night at The Pharmacy Gallery and Art Space downtown on Adams Street. This week's guest performer, jazz pianist Ptah Williams, played with many jazz greats including George Benson and Freddie Hubbard, plus toured jazz festivals across the U.S. and Europe. Ptah will be joined by fellow St. Louisian, world-class bassist Willem Von Hombracht, and Jose on his Hohner guitar. Dig it, man.

In Jacksonville this weekend at the historic and beautiful Lovejoy Hall, Scotty DeWolf hosts Ukrainian natives Yuriy and Tetiana Safronov for a fundraiser to raise awareness about and humanitarian aid for what's now happening in Ukraine. Saturday at 3 p.m. there's a special presentation for students and their families (especially farm folks interested in helping kindred rural Ukrainians), then on Sunday at 3 p.m. the Safronovs perform traditional Ukrainian folk songs and stories along with performances by other participating musicians in a concert setting. I hope you can be there to learn and lend a helping hand.

On Friday, upstairs at Broadgauge on the Petersburg square, check out a free songwriter showcase called Songs & Stories: Comin' Home, hosted by area songwriter Mike Allen. The mighty cool event comes in two parts, the first is called "Petersburg" with Mike kicking things off, joined by Kevin Atterberry and Larry Dirks doing songs about the 'burg, and the second is called "Route 97," featuring Erin Connolly, the Highway Kind (Keith Shank and Josh Pitcher) and yours truly, spinning yarns and singing songs about old 97, the road.

Then for the big event this weekend (isn't it great that they just keep coming), join the party at Sheedy Shores WineGarden near Loami for the Positively Summer Music Festival. Conceived and organized by Tom Beverly, Geoff Ryan and friends, the shindig is free (bring lawn chairs and blankets, if you so desire) with food trucks, craft vendors and a beautiful bucolic lake view included. They'll have a ripping cool Americana music lineup starting at 1 p.m. Saturday, consisting of (approximately) 45-minute sets each by Peaches & Bacon, Me, Myself and Schy, Positively 4th Street, The Chickadee Sermon and The Tangents, with PS4 returning to close out the night. Sunday afternoon starting at 1, this lineup of Doc Hollow, Buckhart Road, The Deep Hollow (an hour's worth of these folks) and PS4 mopping up again until 6 takes the stage. How about that for some fun in the sun coming soon in June?

And here's where I give you the business about looking up the other great music happening all over town available to see in our music listings.