No cause of death found one month after the fact

A man who died a month ago after a struggle with Sangamon County jailers was shocked by a Taser at least five times times, according to jail records.

Jaimeson Cody, who was 39, died 20 hours after entering the jail when Divernon police arrested him on suspicion of domestic violence. About 10 hours after he was booked on April 27, jailers sensed trouble.

“Subject was displaying erratic behavior and hallucinating,” wrote a guard in a form titled Report of Prisoner Medical/Psychological Referral that documents a referral to the jail’s medical staff about 11 hours before the fatal struggle. “He stated he was tired of seeing all the ‘tubes.’ Subject was shaking and sweating profusely.”

It’s not clear what was diagnosed. After being taken to the jail’s medical unit, where he spent about an hour, records show that Cody was placed alone in a cell in the jail’s booking area, where he was checked every 15 minutes.
click to enlarge 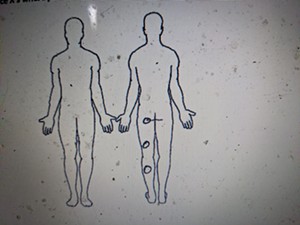 Diagram showing where Jaimeson Cody was tased on the back of his left leg after being tased at least twice on the front of the same leg.

Ten hours after Cody’s trip to the medical unit, a guard saw blood on his jail uniform and on a ledge separating a toilet from the rest of the cell to afford privacy – according to jail records, he had tried to harm himself. After a conversation with Cody through the cell window, the guard left. Within 10 minutes or so, other guards arrived. What happened next isn’t clear, due to a 91-second gap in footage from a camera that showed the corridor outside Cody’s cell, where the struggle occurred.

Records show that Cody was tased at least five times, twice on the front of his left leg and three times on the back of the same leg. “I took over a Taser from another officer who already delivered two cycles with the Taser,” wrote one guard after Cody was dead. “The subject continued to be combative, so I delivered additional drive stuns to gain compliance.” The guard who handed the Taser to his colleague wrote that Cody kept fighting after being shocked; "I deployed my county-issued Taser and made contact with his left leg. Inmate Cody was still actively resisting. I was instructed to tase inmate Cody again to try and gain compliance. Multiple instructions were given to inmate Cody to stop resisting and place his hands behind his back. Inmate Cody continued to resist and I was instructed to tase him again and followed with a three-point connection."

Sangamon County coroner Jim Allmon said that he can surmise no way that Cody could have been tased on the back of his leg unless he was facedown prone. No cause of death has been established, nor has the Sangamon County coroner’s office determined whether the death was natural, accidental, homicide or suicide – the only other possibility is undetermined, and stumped is never a preferred outcome, according to Allmon, who says that he expects official determinations to be made within two weeks.

“We’re waiting on some test results to come back,” Allmon said. “He (the pathologist) has ordered a lot more testing than usual, given the circumstances.”

"It's concerning — I'd just be BS'ing you if I said it wasn't concerning," the coroner said. "The last thing we need in a situation like this is to have video footage unavailable to us for whatever reason. ...  It's not a deal breaker. We'll still be able to determine, I think, what happened to this guy."