It’s time to opt in

After the Supreme Court ruling, a message to my fellow former fair-sharers 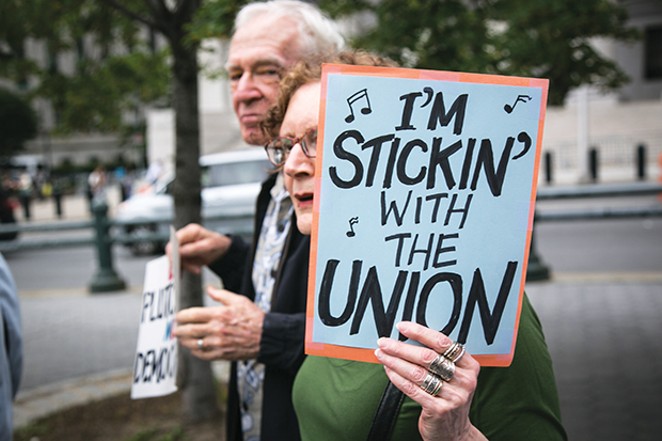 Two very nice union representatives knocked on my door last week. Anticipating an unfavorable ruling in Janus v. AFSCME, they asked me, a “fair share” state employee, to join the union. I didn’t have to think twice. Sign me up, I told them. I’m with you.

Although I don’t believe, as Mr. Janus does, that paying fair share dues – fees paid to the union by non-union employees – infringes on my First Amendment rights, I also don’t think that unions are perfect. I’ve heard all the arguments against unions: that they make this country less competitive. That higher costs of union salaries and benefits are passed on to consumers and taxpayers. That they unfairly protect incompetent workers.

I joined the union because, despite its flaws, it is an organization that is dedicated to advocating for the rights and well-being of working people, and I am a working person. I am fully cognizant of the fact that the quality of my salary, benefits, health care and pension are 100 percent due to the fact that a union negotiated for them on my behalf, and that if I want to continue enjoying good benefits in the future, I will need a union to advocate for them each time the contract is up for renegotiation.

Immediately after the Janus decision was delivered, the state of Illinois sent an email to all its employees, myself included, telling us that we were no longer obligated to pay “fair share” dues and that “Illinois statute requires the State to provide health care benefits, retirement benefits and many other employment benefits. They do not depend on union membership or collective bargaining.”

That statement is misleading at best. Illinois might be required by statute to provide benefits, but the statute sure doesn’t mandate the quality of benefits it provides. Without the strength of a union behind me, the state could and probably would renegotiate my contract to increase the number of hours I am required to work, double my health care costs, decline to offer a cost-of-living raise, or otherwise cut back my benefits. If this were to happen, and I, as an individual, were to protest, my lone voice and interests would be ignored. By teaming up with tens of thousands of other working people, however, our collective voice gives us power in negotiations. Hence, the importance of unions.

I know what you’re thinking. I know because I used to think the same thing, before I started working for the state. You’re thinking that you’re sick of hearing well-paid state employees with Cadillac benefits grumbling over their contracts when they have it better than many in the private sector.

The thing is, unions help all workers, organized or not. According to the Economic Policy Institute, unions keep wages high for nonunion workers as well by setting pay and benefit standards that nonunion employers follow. Labor unions brought us the weekend and 40-hour workweeks and the end of child labor and paid vacations and employer-sponsored health insurance and a host of other benefits we take so much for granted now that we forget there was even a struggle for them in the first place.

If you hold a position covered by collective bargaining, I urge you to join your union. Yes, your dues may go up by a couple of bucks each month. I’d be lying if I said I wasn’t briefly tempted by the idea of opting out of the union and putting that money in my pocket instead. But the benefits you reap with collective bargaining power – for example lower health care premiums and enforcement of step pay increases – are vast in comparison to the modest dues you pay.

I know that the state’s email said, “even if you opt-out of the union, you still receive the same employment benefits as union members.” But think about it. If everybody opts out of the union, who will be left to, you know, be in the union? Who will speak for you? Who will negotiate a favorable contract on your behalf? Who will have your back if your job is unfairly threatened?

The union is there for working people. Even Mr. Janus, whose lawsuit weakened the ability to bargain collectively for millions of American workers, will go on to retire with a comfortable pension and full health care benefits negotiated for him by the very union he took to court (I hope he thinks about that every time he cashes a pension check). In this day and age, when the middle class is being squeezed, wages are stagnant, prospects are shrinking, our collective wealth is being funneled upward to make the rich richer, and wealthy special interests are doing their best to undermine collective bargaining, it’s time for working people to be there for their unions. Labor unions aren’t just for you, they are you: your voice, amplified in collective strength with thousands of people just like you. It’s time to opt in.

Erika Holst is an employee of the State of Illinois and a new member of AFSCME.