It's time for corned beef and cabbage

Nothing says St. Patrick's Day better. Unless you're Irish. 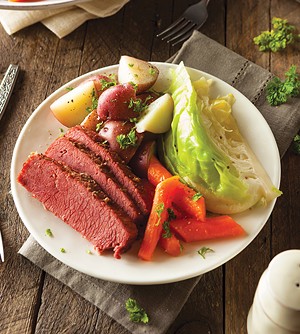 Nothing says St. Patrick's Day like corned beef and cabbage, unless of course you're actually Irish. Although the dish has become synonymous with the Ides of March around much of the world, the Irish aren't traditionally a beef-eating culture. In Gaelic Ireland, cattle were sacred creatures and an important symbol of prosperity, used as work animals and as a source of dairy, but rarely raised for meat production. The invading British brought with them their lust for beef, eventually outsourcing much of their cattle production to the neighboring countries under their occupation. The origins of what we think of as "corned beef" begin with the Cattle Acts of 1663 and 1667, which prohibited the export of live cattle into England and flooded the Irish meat market, drastically dropping the price of beef.

Salt, as it has often done throughout history, also drives the story of this dish. The term "corned beef" actually refers to the large salt crystals about the size of a kernel of corn that were used to cure the beef. Salt was not taxed as heavily in Ireland at this time and was therefore relatively inexpensive and available. Thanks to the sudden abundance of beef and availability of salt, Irish corned beef quickly became a valuable commodity and was exported to much of Europe and the Americas though the end of the 18th century. Irish corned beef was vital to both the British and French navies during this period and was consumed throughout every corner of their shifting empires.

The Irish people, however, were generally not able to afford meat of any kind during this time, let alone beef. The occupying English seized Irish lands, established feudal plantations and imposed onerous laws against the native Irish Catholic people. Potatoes, also introduced to Ireland by the British, were what the persecuted Irish survived on until a potato blight began in 1845, decimating the country's crop and much of the population. The famine that ensued killed a million Irish people, and another million fled on the "coffin ships" that brought them to America.

The Irish immigrants who sought refuge in the United States faced painful racism and prejudice upon their arrival. Many settled together for support and safety in tight-knit urban communities, the largest of which was in New York. Corned beef was inexpensive and widely available in Jewish butcher shops throughout New York City and, for the first time, many of these Irish immigrants were able to enjoy the dish for which their forebears had been famous. Boiled bacon with cabbage and potatoes is a traditional dish to this day in Ireland, and it's likely that the first Irish Americans simply substituted with what they had available – Jewish corned beef. But unlike the beef that their ancestors had corned, the corned beef that the Jewish butcher shops sold was made from brisket, a kosher cut from the chest of the animal. Cooked long and slow, the tough brisket becomes meltingly tender and flavorful – a far cry from the tough, salty corned beef that sustained the Royal Navy.

Corned beef's specific connection to St. Patrick's Day is murky. Many Irish Americans prospered in spite of the bigotry they faced, and by the mid-19th century, St. Patrick's Day celebrations had become more prevalent across the United States. However, in true American fashion, the traditionally somber saint's day had morphed into a proud celebration of Irish heritage. And what better way to celebrate than with a big, festive cut of beef from your neighborhood Jewish butcher shop, boiled up with potatoes and fresh spring cabbage? Thus a uniquely American culinary custom was born and, before long, corned beef and cabbage became synonymous throughout the United States with St. Patrick's Day and Irish culture generally. So prevalent was this association that one has to wonder if it played a role in President Lincoln's choice to serve corned beef with cabbage and potatoes for his Inauguration dinner menu on March 4, 1861.

Place the beef, pickling spice, garlic and onion in a large nonreactive container with a tight lid. (You can also use a 2 gallon zip-close bag.) Dissolve the salt, sugar and saltpeter in the cold water and pour it over the meat in the bag. Squeeze out as much air as possible, then seal the bag and refrigerate for 10 days. (If you're in a rush you can cut the brisket into smaller pieces to reduce the surface area and reduce the necessary curing time by a few days.)

When you're ready to cook the brisket, remove it from the bag and rinse it off. Place it in a large pot, along with the additional pickling spice (Tie it up in a cheesecloth or spice ball.), onion, garlic and celery. Add cold water to cover and then place the pot on the stove over high heat. Bring to a boil, then reduce to a simmer and cover. Cook for 2-3 hours, or until the meat is fork tender. Remove the meat from the pot and set it aside to rest. Add the potatoes, cabbage and carrots to the pot and bring to a boil. Reduce heat to a hearty simmer and continue to cook until vegetables are tender, about 20 minutes. Slice the beef across the grain and arrange on a platter with the boiled vegetables. Serve with creamy horseradish sauce and hearty mustard.