‘It’s OK. Everything will be all right.’ 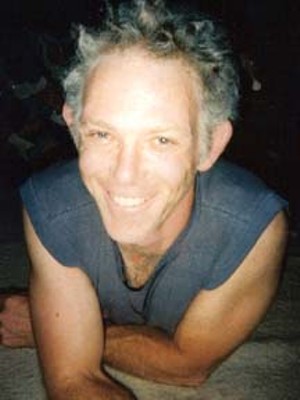 Mark visited Illinois the year the Mississippi flooded. As a participant in the 1993 World Free Fall Convention in Quincy, he took a Springfield excursion which turned into two decades on the prairie, far from San Francisco where he hung his wit.

Mark was a fearless voyager through life. He loved to take risks, learn and explore. The Big Kahuna led him through death’s door, but Mark would be the first to repeat his infamous words, “It’s OK. Everything will be all right.” He did not believe this is all there is.

I met Mark during open mic at Barnes and Noble in ’96. His words, including all those four-letter ones, were as honest and unpretentious as the man. He pushed out some of the most real poetry since Bukowski, and one of the most appealing chapbook covers in town. Mark’s gift for conversation, language and connecting was fueled by experience, self-study and an insatiable quest for knowledge and understanding. Coupled with a great memory and a smile that embraced you, he could converse about anything – sports, literature, history, politics, health, food, music, geography.

He knew the facts; he had the story. One memorable tale was hitchhiking up the West coast to Alaska. An Indian in an old truck gave him a ride and offered, “You know, all blue-eyed people are from outer space.” Mark had striking blue eyes that sometimes looked fluorescent. Mark dreamt of being an astronaut or at least would list that as his occupation on forms.

As a boy he wanted to be a priest. Instead, he became a yogi. He earned the title Yoga Siromani from The International Sivananda Yoga Vedanta Centre after living on an ashram in upper New York state.

He once wrote, “I like to read, travel and work.” After he made Springfield home, we joked about work at Quality Lighting; he sold light to folks. If you remember a salesman with a head of hair like Don King’s or Einstein’s, who limped and brazenly urged you to “buy my stuff” – that was Mark MacDonald. He told it like it was.

When MS took away his ability to work, I suggested he teach yoga again. He noted, “No. I am not a good example in a wheelchair.” At that point, he had already made meditation, readings, breathing and chair exercises and the quest for enlightenment his daily routine. Tough as nails from growing up in Queens, he was one of the most thoughtful, gentle and caring people I ever met. He was proud to be of Clan Donald Illinois and St. Andrew Society of Central Illinois. I was just proud to know this unique and considerate human being.

Mark’s MS took away more than one person should have to deal with. An incurable, unpredictable disease, MS strips nerves of their myelin coating, causing scar tissue, basically short circuiting talk between brain and body. It can cause extreme fatigue, spasticity, bladder, vision and other annoying to serious-but-manageable symptoms. Most will have some disability. While women are two to three times more likely to have MS, men tend to have more rapid and extensive disability. Mark went from walking to walker to wheelchair in the 16 years we were together.

When writing was more difficult and his voice slurred, there were phone calls and scratches on paper including this poem, Now That I’ve Been Crippled: “look ma no hands / I amuse myself / comparing my problems with the / other members of the club / it will get better / good vibes man, I tell myself.” Many of you may have received strange calls with my name on caller ID. It was my man desperate to be out in the world. Thank you for listening. Later, he fought bouts of pneumonia, aspirating liquids. But he never gave up, rarely complained, laughed often and was a teacher until the end.

He taught me vocabulary, to think further outside the box, to be more mannered, curious and giving. Notebooks of poems and ideas remain – ideas, his way of giving. Because he was a minimalist, there’s not much left – a passport, words and memories. He gave me the greatest gifts a man can give a woman – to know I was loved completely – the chance to lie in his arms each night and morning – and a desire to be a better person. We were blessed with a relationship that trumped the disease.

That included talking about anything, including what we wanted at the end of our lives. We urge you to talk with your spouse and family immediately about these things even if you’re not sick. Write the answers down. For guidance, find a questionnaire. Some funeral homes have them online. Keep this document with your will.

For those facing end-of-life decisions, explore the pros and cons of dying at home and a hospital. Mark wanted to die at home, not in a hospital bed hooked up to a machine. He was brave until the last of life was sucked from his body. Hospice was informative and supportive. I read everything I could find. I still wish we had talked even more. Don’t go bravely or blindly go into that good night. Talk about death and dying now. Talk.

Mark wrote: “I was watching / a fly die / the on rushing of winter / it climbed the window / in search of its last flight / fell off the pane / now lies silent on the sill / and fools buy insecticide.” He always knew what to say: “Do your best. Don’t hurt anyone as you go through life. Leave happy, smiling people.” From his poem, “Anita”: “But while I’m still in this bag of bones / I wanta say / you been awful good to me / that means something / remember I try to give as good as I get / it’s one of my rules.” And he did. Lekker sliepe, lover. Gracias. Blue skies, smiles and turas math dhut! –Anita Stienstra