The Isaac Ellwood home and museum in Dekalb.

Most of us know the song “Don’t fence me in.” For those in the late 1800s who owned cattle, fencing them in was part of the ever shrinking range mentality and the “stay in your own pasture” one. One Illinois gentleman, Isaac Ellwood, made his fortune in barbed wire. Lucky for us, we can tour this beautiful home and in the attached museum learn all about the history of barbed wire. The Isaac Ellwood home is located in DeKalb. The museum tells the story of the barbed wire and how fencing changed the way livestock is raised.

Isaac Ellwood benefitted from barbed wire and made his fortune on it, but he didn’t invent it. That was Joseph Farwell Glidden, who invented one of the most widely used types of barbed wire in 1873. Not far from the Ellwood home is the Joseph F. Glidden Homestead & Historical Center. Their website tells about his accomplishment. “He helped change the history of the American West and had far-reaching impact throughout the world. Glidden invented ‘The Winner’ (patented Nov. 24, 1874) at the DeKalb home he built in the 1860s.”

Isaac Ellwood invented a barbed wire prototype but saw that Glidden had the best idea.   Glidden and Ellwood are not the only two involved with the barbed wire story. The Ellwood House and Museum says, “In 1873 Joseph Glidden, Jacob Haish and Isaac Ellwood visited the DeKalb County Fair.  Here they viewed an exhibit for a ‘wooden strip with metallic points’ created by a farmer named Henry Rose. His device was nothing more than a strip of wood armed with nail-like spikes meant to be attached to a plain wire fence.”

The three men each individually began to think about how to improve on Rose’s idea. “Within two years each of the men had obtained his own patent.” 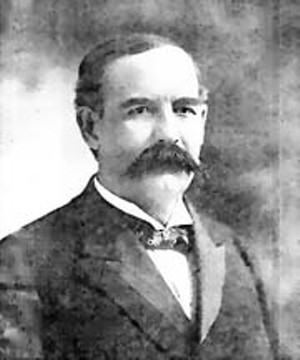 Joseph Glidden created the first barbed wire, making his first strand in his kitchen using a coffee mill to twist the barbs into shape. Then in his barn he used a grindstone to twist two strands together. After creating 100 feet of the wire he fenced in his wife’s vegetable garden to keep stray animals out. Ellwood saw the potential in Glidden’s idea and paid $265 to purchase one half interest in Glidden’s patent.

Together they established the first barbed wire factory, the Barb Fence Company. The first year they created 10,000 lbs. of barbed wire mostly by hand. In 1875 they built a factory and moved into mechanization with the use of a steam engine. Production exploded and in 1875, 600,000 lbs. were manufactured.  In 1876, Glidden sold his remaining patent interest to Washburn & Moen Co.

Ellwood made a fortune from his interest in the barbed wire. Born on Aug. 3, 1833 in Salt Springville, N.Y., as a young man he drove a mule team on the Erie Canal, traveled to the California gold fields and in 1851 clerked in a hardware store before coming to DeKalb County in 1855 to visit his brothers.  Isaac Ellwood began working on the Miller farm and married the farmer’s daughter. The Washburn & Moen and Isaac Ellwood & Company bought up several rights to patents and after years of litigation, in 1892 the United States Supreme Court upheld Glidden’s patent based on the fact that the twisting of the two strands of wire is what holds the barbs in place. Eventually Isaac Ellwood established the American Steel & Wire Co., which eventually became a subsidiary of U.S. Steel Corporation. Barbed wire was built in DeKalb until 1938 when production was moved to the more metropolitan areas of Waukegan and Joliet.

The Ellwood mansion is a lovely Victorian mansion built during the Gilded Age. In the home visitors may view crystal chandeliers, antique woodwork, and the original furnishings. The center of the home is the three story spiral staircase. A tour guide offers insight into the family life and the tour includes all four floors of the mansion, along with the servant area. The site also has a “Little House” used as a playhouse by the family.