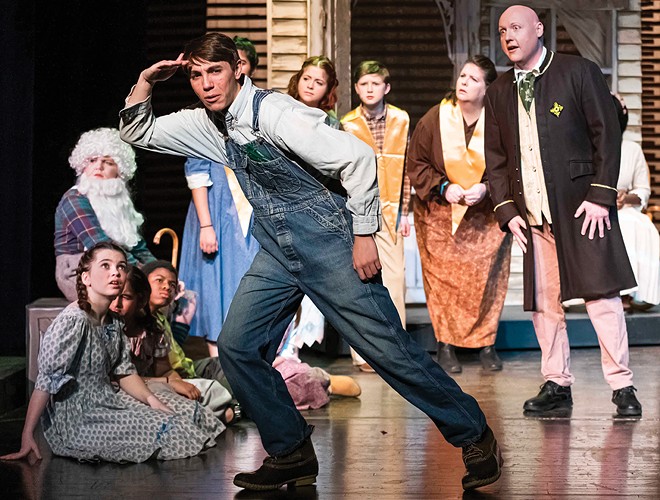 Photo by RT McDonald
Trickster Jack (Adam Schnell) slams out a tall tale in Beyond the Beanstalk: You Don’t Know Jack! at the Hoogland through Sunday.


Storytelling is everywhere. In business, there is the "power of the story." We curate our lives on Facebook and Instagram. We are told we must "own our narrative."

Storytelling is as old as time. Now Gil Opferman has taken his lifelong love for storytelling and has written a delightful new play, Beyond the Beanstalk: You Don't Know Jack! for the Springfield Theatre Centre at the Hoogland through the weekend. Remaining performances are Friday and Saturday, Feb. 14 and 15, at 7 p.m. and Sunday at 2 p.m.

This show is what storytelling is all about: absorbing, captivating, emotionally connected and powerful. And fun for all ages. With co-director Ann Opferman, Gil has achieved a remarkable accomplishment in assembling and coaching a large, talented intergenerational cast.


Ann and Gil Opferman have contributed to the Springfield theater community in many ways over the last couple of decades – including co-directing seven productions for the Springfield Theatre Centre's intergenerational program. Beyond the Beanstalk: You Don't Know Jack is Gil's second original play, after The True Adventures of Aladdin. Beyond the Beanstalk: You Don't Know Jack delivers what the title promises: a look at the rich and varied storytelling tradition know as the "Jack Tales."

The design and lighting by Craig Williams II are timeless, dynamic and lovely. The base of Jack's famous beanstalk spreading gracefully over the stage – somewhere deep in the mountains of North Carolina – makes a welcoming place for us all to gather and listen to the tale. The fitting costumes are by Debi Iams.


We meet the storytelling Grandpa (Robert Huck) who tells us that while Jack and the Beanstalk is the best known, there are scores of "Jack Tales." As playwright Opferman says, there is "hopeful, lucky Jack, kind but clever Jack, silly Jack, sad and discouraged Jack, wicked Jack and so many more." Often portrayed as lazy or foolish, "Jack" always survives, often thrives, and usually finds a way to turn both reality and power structures upside down. Jack tales are a central part of Appalachian folklore, a blend of European plots and settings with a distinctly American dialect and attitude.

"Jack" is a trickster. In mythology, folklore and religion, the trickster has a high degree of intellect or secret knowledge, and enjoys disobeying the rules of conventional behavior. The trickster is a boundary-breaker. From the biblical Jacob to the Greek god Hermes to the Jungian archetype to Bugs Bunny to Jack Sparrow of the Pirates of the Caribbean to Batman's The Joker, tricksters can be cunning or foolish. Or both. At times the trickster fools others simply for their amusement, or sometimes to survive in a dangerous world.

There are four short scenes, each representing a different storytelling aspect of the mythical "Jack," and capturing the joys, realities and challenges of life from youth to old age. We vividly experience the variations on the "Jack" character as he is represented as a callow youth, a take-charge teenage girl, a despondent and melancholy young man and a bitter, yet feisty, older one. The actors playing Jack range in age from middle school to well into adulthood. The workload is spread around, and our interest is engaged as we meet these different "Jacks."

The first scene is a classic storytelling competition, a perfect and to the point introduction to Jack (in this case, a charming Adam Schnell). The King (a suitably blustering Dennis Killen) decrees that whoever tells the best story shall have the hand of his daughter (a perfect Nia Tiller) and take over his throne.


The King equates storytelling with telling lies, lies that to him are not lies. As Jack spins his yarn, in a form known as a "Wonder Tale," the King keeps urging Jack on, "I believe every word." The more Jack "lies," the more the King praises him. And of course, Jack wins the prize. Then, shockingly, he rejects the King and love and marriage. Here the Trickster Jack upends the power structure. By rejecting the Princess, he asserts that his power and will are greater than the King's.

The second tale repeats the meme or trope of accomplishing something to win the hand of a royal, but here it is draped in the mantle of the classic "hero's journey," with its many challenges.


Deep in the mountains, a witch (an eerie Amber Johnson) has cursed a handsome young prince. The Queen Mother (the stoic and affecting Jazmin Simmons) offers her Kingdom – and marriage to the prince – to anyone who can break the curse.

We meet the wise and cunning "Jack," played winningly here by Jossalyn Bennet-Roth and known as "Jacqui." Unlike the first "Jack," she listens to advice and seeks out help from those around her. Jacqui gives away all she has, and in so doing gains that which she needs to succeed – a group of improbable and valuable comrades and, finally, in a delightful theatrical moment, a large sailing ship.


Jacqui and her crew get the better of the Witch, but Jacqui is more interested in adventure than marriage, and proposes a radical solution. The Prince will join her crew – not as a royal, and not as a dominant husband – but as an equal.


In the third tale, Jack (an affecting Connor Dove) is a man with a broken heart. His beloved wife has died and Jack wanders the countryside in anguish. To avoid future heartbreak, Jack carries his heart in a tin bucket. He earns a meager keep as a tinker. In folktales the tinker, an itinerant tinsmith and repairman, is marginalized – not really a member of society, but some "other." In our story, the townspeople, (including Amber Johnson as a mirthful fiddler and Erin Sullivan as a compassionate baker), take pity on Jack, and endeavor to help him.


In a classic storytelling trope, a Golden Carp (Arya Sreedhar) takes Jack's heart from the bucket, holds it hostage and poses a riddle. By solving the riddle, Jack reintegrates into society, regaining his true sense of self. The Golden Carp has magically transformed into a wise and beautiful woman, who becomes the love of Jack's life. It's a satisfying moment.


In the final tale, we see Jack the Trickster in full. Older but not at all wiser, Jack (the versatile Dennis Killen again) is a cruel and lonely blacksmith, who vows to change.

An aged man (the amusing young Henry Reeves) asks for food. The old man is none other than St. Peter, keeper of the heavenly gates, who rewards Jack with three wishes. As is often the case in old tales, Jack's wishes seem shortsighted and foolish, and St. Peter storms off in disgust. However, Jack uses the wishes to defeat the powers of two devils (Jonathan Long and Aryan Tokhi) and then Satan himself (William Adams).


When Jack dies, an angry St. Peter turns him away from the Pearly Gates. Jack, disgusted, turns toward Hell. But here the Devil refuses him entry as well. Jack rejects the powers of both Heaven and Hell and turns to make his way back in the world. Jack stands defiant. "I shall go back to nature, and haunt the swamp, frightening anyone who comes near."


Earlier in the evening Grandpa had urged his family to "make up your own stories," perhaps suggesting that they find their own paths, questioning authority, conventions and societal expectations.


In the final analysis, the "Jack" of all the tales didn't do it for approval or fame or riches, but for Jack. Perhaps the different aspects of "Jack" reflect the life experiences of Grandpa himself. Perhaps, through the course of Beyond the Beanstalk: You Don't Know Jack we can see our own lives reflected in this multi-faceted character.

Performances continue this weekend at the Hoogland. Yes, by all means, take the kids, but you may enjoy it even more.


Dennis Thread of Springfield is a freelance writer and creative director with experience in the entertainment industry. 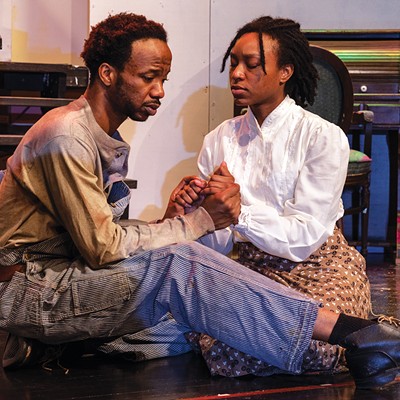