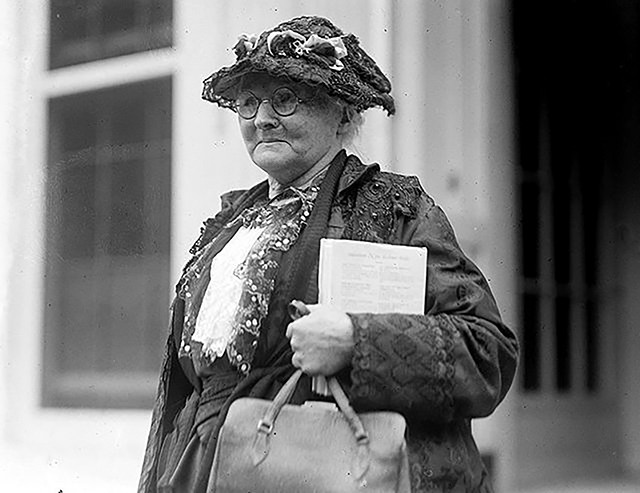 National Photo Company - courtesy United States Library of Congress
Mary Harris Jones at the White House in 1924. She was born in Cork, Ireland.

On May 4, Ireland’s Ambassador to the United States, Daniel Mulhall, visited the Mother Jones Monument in Mount Olive, where he met with Northern Illinois University Prof. Rosemary Feurer, director of the Mother Jones Heritage Project. Mulhull traveled to central Illinois with Brian O’Brien, Consul General of Ireland, whose office is in Chicago.

The ambassador came to Mount Olive to the Union Miner Cemetery, the only one of its kind in Illinois, to learn more about Mary Harris Jones, better known as Mother Jones, and her struggles to help laborers and create better conditions for miners. Mother Jones is originally from Cork, Ireland. She is interred at the cemetery along with victims of the Battle of Virden and others who lost their lives in labor struggles. It was a small gathering, with a few supporters that included Judy Simpson and Kate Klimt, who are part of the Mother Jones Heritage Project, and Mike Katchmar and Ed Becker, two members of the Union Miner cemetery board.

During the visit, Mulhall announced that funds have been approved for a Mother Jones marker for the rest stop near Raymond, on northbound I-55. There is already a marker on the southbound side.

A few hours after his visit, Ambassador Mulhall tweeted, “Visited the impressive memorial to Mother Jones (1837-1930), revered American labor activist who was born in Cork in 1837. Such was her fame that some 50,000 people attended the dedication of her memorial at the Miners’ Cemetery, Mount Olive, Illinois, in 1936.”