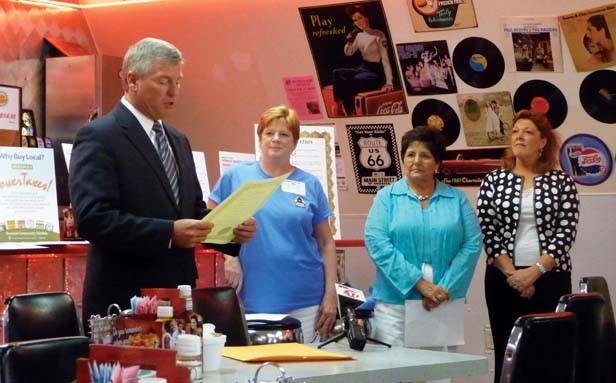 I was a newspaper publisher at the age of 24. My aptitude for the job can be judged by the fact that the column you are reading appears in a newspaper that is not published by me. I published two newspapers by the age of 30 and both failed. New newspapers usually do. Hooper Warren, S.C. Meredith, George Forquer, John A. Roberts, George R. Weber, T.W.S. Kidd and Walter A. Townsend are only a few of the people who published independent papers in Springfield over the years. Each thought they could make a profit by making a statement; each learned that free speech is anything but when you print it on paper.

For a newspaper to survive for even a few years is extraordinary, and none manages to do so without extraordinary publishers. Illinois Times has had them, as is attested by the paper’s record of 37 years of continuous service to the thinking Springfieldian. Printing the Ten Commandments on stone tablets is easy compared to getting out a quality alternative paper week after week in a market as small as Springfield’s.

No publisher gets into the business to make a fortune. Instead, he is more interested in making a candidate, or a party or a city. Which is why so many of them go broke. Attention to the business side must be paid. While a publisher doesn’t run the presses or schedule the trucks or run the payroll, she sees to it that all those things and more get done at a price that advertising will support.

For all his importance, a publisher is usually invisible. Editors are the noisy human voice of the institutions that hire them, but even they become public figures only rarely. (The Illinois State Register’s public works crusader V. Y. Dallman was one who did.) Writers owe their livings to publishers, yet even they seldom know anything more about them than their names, which appear at the bottom of their paychecks. Writers tend to maintain a principled distance between themselves and anything to do with the business side, mostly out of fear that a publisher’s pragmatism might be contagious. I’ve been published in three or four dozen publications and I can tell the name of the publisher of only two of them.

Which is usually the way publishers like it too. Publishers and writers come from different backgrounds and have different professional preoccupations. Meeting deadlines is tough; meeting payrolls is a lot tougher, and an awful lot of publishers – and they are an awful lot – see writers merely as overhead.

Or as troublemakers. I am sure that Sharon Whalen regards as golden the hours she’s spent explaining the concept of the free press to advertisers made unhappy by something they’d read in this paper. How sophisticated advertisers know that a good paper for an advertiser is one that puts eyeballs on the page, and how a lively paper does that. How buying space on that page is not supporting an opinion or set of opinions but supporting free speech and open debate.

Sharon, I should explain, was the publisher of Illinois Times for a decade that ended last week. She’s good at the work. Her association with the paper’s business operations goes back to 1980, and in that time those operations have grown gratifyingly more sophisticated. However, it was as “a journalist’s publisher” that our editor rightly praised her in his announcement of Sharon’s leaving. It might be interesting if I were to recall for you the many conversations I’ve had with Sharon after I’d annoyed in print an advertiser or influential reader, conversations in which Sharon asked me ever so politely whether I might maybe back off of this businessman or say something nice about that project, you know, for the sake of the paper. Only I can’t. She never asked me. Not once.

What Sharon and I have talked about is her commitment to preserve the editorial freedom of IT’s contributors. In the 60 years that the Fleischman family owned The New Yorker, they earned their way into publishing’s hall of fame by maintaining a wall between the magazine’s editors and writers and its advertising salespeople. (It was not actually a wall but a ceiling; the two departments were deliberately housed on separate floors of their headquarters on West 43rd Street.) I had Sharon between me and the advertisers, which was better. You could, if you really wanted to, get around The New Yorker’s wall of separation by using the elevator; you couldn’t, if you really wanted to, get around Sharon.

So Sharon has left the paper and Illinois for sunnier southern skies. But the real news here – from this writer’s perspective anyway – is not that IT’s longtime publisher is leaving but that there is still an IT to leave, and Sharon Whalen had a lot to do with that.