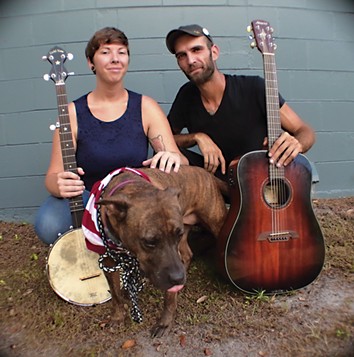 We can now give our regards to mean old March and those finicky weather days, as we give a rowdy, howdy hey to an aspiring April 2022 and the soon-to-be regularly warmer times ahead. Blessed as our scene is with an abundance of outdoor-ish music venues at several local bars, look for the heated spaces and stages to be filled with bands galore very soon.

Let's give a special hurrah to Buzz Bomb Brewing Company for going completely and beautifully bonkers with music over the next few days. Surely it's all related to Benjie's Birthday Bash on Saturday, but this is a whale of an upcoming lineup. On Thursday comes Swamp Rats, a Florida folk duo known for mating claw hammer banjo with punk guitar rhythms accompanied by riveting vocals and meaningful lyrics. Scotty and Andy just released their latest EP, Butcher Knife, on Bandcamp with an April 23 date announced for all other digital platforms. Friday delivers us Justin Moyar, the One Man Blues Band, from Erie, P-A, getting down with lovely guitars and harmonica swirls as he finishes up his These Blues Were Made for Marching tour that took him (as his one-man band) throughout the Midwest during the month of March. For a grand finale on Saturday, how about four acts in one night with Black Tarpoon, The Pentagram String Band, Abraham and the Old Gods and Johnny Lawhorn taking turns taunting your mind, toying with your flesh and tickling your soul, starting at six o'clock and going until eleven, if you so dare.

Friday, many of our local heroes are back in the saddle again, including Captain Geech at the Curve, After Sunset at Long Bridge, Exit 52 at Weebles, Positively 4th Street at George Rank's, Josie Lowder at Anchors Away, J. Brew & the Crew at Boone's and White Lightnin' at Northenders VFW, while the Blue Grouch hosts the debut of our latest Springfield group, Grounded. For touring acts on Friday, there's Elvie Shane at Boondocks and the Kentucky Headhunters with the Georgia Thunderbolts at Jacksonville's Water's Edge Winery & Bistro. Rumor has it Recycled Records plays host to Elton John, Bryan Adams and Ryan Adams joined by Lady Gaga, Lady Antebellum and Liza Minnelli upstairs at the store for an April Fool's Day evening free show that is not really happening.

Saturday arrives with a blistering blast of more familiar local acts coming back, including The Remix at the Curve, Gabe Marshall at Whiskey Jack's, Damned Torpedoes at Danenberger's, Smooth Groove at the Blue Grouch, Rockhouse at the Main Gate and Lick Creek with Unchained at Boondocks. One newcomer band drops in with a friendly Springfield face when Zack Fedor brings Sunflower Headlights, his Windy City musician pals, to his hometown for a gig at Weebles.

Here are some things going on with two Springfield-based, internationally acclaimed musicians. Ben Bedford kicked off his Kickstarter campaign last week to crowdfund his sixth album and you can learn all about it in his project notes. You'll also find a good read on making art, trials and tribulations of being a working-for-a-living musician and other thoughtful considerations penned by Ben. Cowboy Randy Erwin, our very own world-famous yodeler, singer and musician, adapted and arranged traditional music for Reggie Guyton's new play, Small Beginnings, now showing in the Union Theater at the Abraham Lincoln Presidential Museum several times over the next four weeks and continuing on into the summer months. Check with the ALPLM for show times, then look up and listen to a clip of Randy performing the play overture on YouTube.

That's all folks. See you on the flip-flop.