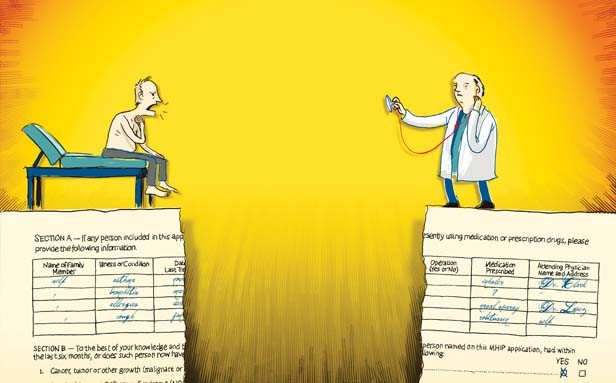 While the Illinois Department of Insurance says it won’t approve such plans, which it politely says are “contrary to law,” a statewide health advocacy group worries that the insurance companies will pressure Gov. Pat Quinn into bending the rules.

The issue revolves around a core provision of the federal Patient Protection and Affordable Care Act of 2010, commonly called “Obamacare.” Under that law, health insurance companies won’t be able to charge higher rates for women, people with preexisting conditions and certain other classes of people after Jan. 1, 2014. The law also requires health insurance companies to include a basic set of benefits and bans them from denying coverage to people with existing conditions after the deadline.

To delay that requirement, some insurance companies operating in Illinois attempted to shift their “plan year” – the 12-month period during which a health insurance plan provides coverage – to begin just before the deadline and extend into December 2014.

“Both results are in contravention of the federal rule, and violate the spirit and intent of the law that the market reforms be administered in a consistent and timely manner,” Boron wrote in his bulletin to the insurance companies.

While it may seem Boron’s admonishment nixes the companies’ plans, advocacy group Campaign for Better Health Care says the companies are now lobbying Gov. Pat Quinn to provide a way around the rules. The group sent out an email to supporters last week urging them to call Quinn’s office and demand that he uphold the rule.

“As implementation moves forward, we must continue to work together to ensure that Obamacare is not manipulated by those who put profits over people,” CBHC said in the email. “This won’t be the last time insurers try to skirt the health care law. It’s up to all of us to make our voices heard and hold insurance companies accountable.”

Two other facets of federal health insurance reform are shaping up in Illinois.

On July 22, Quinn signed into law Senate Bill 26, which extends Medicaid coverage to cover those who earn up to 138 percent of the federal poverty level. For a single person with no children, the poverty level begins at $11,490 and increases by $4,020 for each additional household member. That means Medicaid in Illinois will now cover individuals making up to $15,856 and increasing by $5,547.60 for each additional household member.

Expanding Medicaid is part of the federal plan to ensure everyone has some form of health insurance, which is expected to decrease the overall cost of health care. The expansion is expected to see 342,000 more Illinoisans enrolled by 2017. It will also qualify Illinois to receive an additional $12 billion in federal funding from 2014 to 2020 because the federal government covers the cost of expansion for the first three years. The reimbursement rate will gradually decrease to 90 percent by 2020, where it will remain indefinitely.

In addition to Medicaid expansion, Illinois is gearing up to begin open enrollment for its market-based health insurance exchange on Oct. 1. The exchange allows people to purchase private health insurance through a public portal in which every health plan is vetted by the state to meet basic benchmarks. It’s meant to allow access to basic plans for small businesses, those whose employers don’t offer health insurance, and people with preexisting conditions that might otherwise preclude them from obtaining coverage.