Inside the mind universal 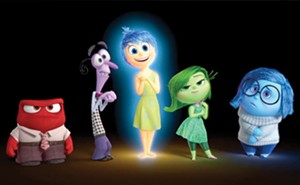 Let’s hope that era was a minor bump in the road, as Pixar is most assuredly back on the right track with Inside Out, a smart, inventive moving feature that’s one of their best. As he did with Monsters Inc. and Up, director Pete Docter provides not only uproariously funny moments but deeply moving ones as well, to make what is probably the most audience-relatable film in the studio’s history.

From the very first moment, you know you’re witnessing something special as Docter and company vividly create their own world replete with common touchstones. The arena of action is the mind of a young girl named Riley. In a brilliant pre-credits sequence, we see the birth of her first emotion, Joy (effusively voiced by Amy Poehler), when her parents first comfort her. Her status as sole emotion is short lived as Sadness (Phyllis Smith) soon arrives, setting up what will be a lifelong battle over Riley’s personality.

As her life fills with experiences Riley’s mind becomes a repository for memories, some of them containing formative experiences that determine her emotional makeup while important concepts in the girl’s life are given their own island (Family Island, Friendship Island, etc.) in her mind, all of which form a solid foundation for her personality. With Joy keeping Fear (Bill Hader), Anger (Lewis Black) and Disgust (Mindy Kaling) in check most of the time, Riley has grown up to be a healthy, well-adjusted, happy girl of 12. That is, until she and her family move from their idyllic home in Minnesota to the dour urban world of San Francisco.

It’s at this point that the film goes into imagination overdrive. It’s an absolute delight to see the cleverness of screenwriters Meg LaFauve, Josh Cooley and Docter at play as they personify the conflicting emotions as well as the recesses in Riley’s mind. With the young girl veering towards depression, her five core feelings are in conflict as to how they can best serve her while a traumatic event puts her core memories in jeopardy and separate Joy and Sadness from the group. Their journey back to Headquarters requires that they ride a Train of Thought through Imagination Land, with a brief stop at the Dream Factory before having to contend with the Chamber of Abstract Thought before delving into subconscious and forgotten memories.

The imagination at play here is astounding as all of these places are vividly brought to life, each tapping into common themes and perceptions that make them instantly relatable to the viewer. The most brilliant moment in the film comes when Joy attempts to create a happy dream for Riley, only to see it turn into a bizarre, nonsensical series of surreal events involving a unicorn, a runaway clown and a dog that’s been cut in half running around a classroom. The particulars may not be the same, but who among us hasn’t had a dream of this sort that has us thinking our brains have short-circuited?

One of the things that make the best of the Pixar films so vital is that they don’t shy away from tackling the more thorny aspects of their respective themes. Despite Joy’s best efforts to deny them, Riley is forced to deal with her fears, moments of depression and leaving behind a bit of her childhood on her way towards growing up. Docter poignantly renders these moments and the viewer can’t help but recall their personal emotional trials and triumphs as well.

In not sugarcoating the emotional difficulties inherent to growing up, the film’s message proves all the more powerful. Uncommonly clever, visually inventive and emotionally resonant, Inside Out is an instant classic, a movie that will be viewed for years to come. Docter’s film is not just a disposable piece of entertainment but an instrument for creating greater understanding and empathy of ourselves and others, something that will be needed as long as we’re plagued with fear and doubt in the world around us.