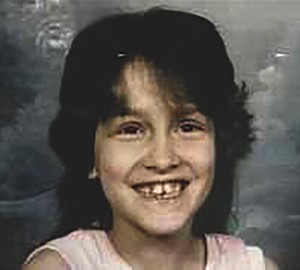 Jennifer Lewis, age 9.
I find myself grieving for someone I've never met every Sept. 17 – for the past 31 years.

Back in 1990, I was working as the night police reporter for the Quad-City Times when I was dispatched to a fire at a school playground at 9 p.m.

I was one of the first on the scene. I walked to where I saw smoke rising from some tall weeds on the edge of the playground, looked down and was met with the body of a child that had been doused with gasoline and set on fire.

I staggered backwards gasping for air. I could feel the bile rise in my throat and my knees go weak. It was the last thing I expected to find on a crisp autumn evening in Davenport, Iowa.

I was there when the firefighters, the detectives, the medical examiner and a horde of reporters arrived.

And I stood a few feet from the smoldering remains wondering: Who would do such a thing? What evil lurked in the shadows that committed such an act?

We later learned that the victim was Jennifer Ann Lewis, a pugnacious tomboy from Rock Island's west end. She was last seen buying gum from a neigWhborhood store.

She never came back. Year after year, I've learned a bit more about this girl. And the more I learn, the sadder I become.  I've wondered what her life would have been like if she had lived.

A teacher's aide told me how Jennifer liked to twirl around in frilly dresses hiking the hem higher and higher as she spun. Her best friend told me how they played with My Little Ponies together. Her mother recalled her daughter's sweet disposition, how she loved her newborn baby brother and her dog, Bowser.

We name buildings after wealthy benefactors, bridges after politicians and streets after celebrities. But our collective recollection of children who die at the hands of others fades.

A granite monument funded by the community was placed on the playground where Jennifer's corpse was found. A while back, I went looking for it only to learn that vandals long ago destroyed it.

Even in death, she isn't accorded the respect her life was due.

No one that night walked away from that schoolyard unchanged.

One former police lieutenant froze on a witness stand years later as he suffered a flashback to that horrible night. A police sergeant, who I knew well, had a fit of rage years later when Jennifer's name was evoked. A corporal at that scene descended into alcoholism.

For me, slumber was elusive for weeks following that fateful night.

Another reporter who was there confessed to her teenage sons, decades later, that it is the one image from her journalism career that she can't erase from her mind.

During the past five years, I spent much time researching the case. I've found myself interviewing vagrants beneath underpasses in New Orleans, knocking on doors of rural Mississippi shacks and wading through thousands of pages of Iowa court documents.

I now know much more. But am I any closer to understanding? Well, I certainly don't understand what would possess someone to commit such evil.

I produced a podcast on the case, and Jennifer's name is now known by many. I want to write a book. But each time I sit down to write, I'm met with the image of a bucktoothed smile and the unassuming brown eyes of a child who never turned 10.

That photo haunts me.

To this youngster, whom I've never met, I can only promise: Your memory will not be lost.

A man is serving a life sentence for her murder. He's been tried four times for the same crime – three convictions and one hung jury. His appeals continue.

Although three juries have found him guilty, when I think of Jennifer, I prefer to think of innocence.

I think of a child without guile who was raped, strangled and burned. I think of a youngster who ran down school hallways telling teachers and classmates alike about her upcoming birthday.

She just didn't know that was the day she would be buried.

Scott Reeder is a staff writer with Illinois Times. Contact him at sreeder@illinoistimes.com