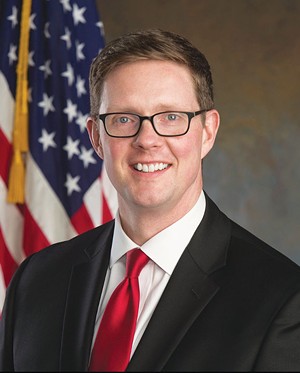 The Sangamon County state's attorney wants the Illinois Department of Human Services declared in contempt of court because of months-long delays by DHS in accepting jail inmates who need mental health treatment before they can stand trial.

Department officials say the COVID-19 pandemic is to blame for an "unprecedented backlog" of about 150 people sitting in county jails throughout the state after being declared temporarily unfit for trial and waiting for a bed at Springfield's McFarland Mental Health Center or one of the state's six other psychiatric hospitals.

"The backlog has been exacerbated by the pandemic's impact on hospital operations, increasing referrals, limited capacity and severe workforce shortages," DHS spokesman Patrick Laughlin said in a statement.

Sangamon County State's Attorney Dan Wright has asked county judges to declare the state in civil contempt – a potential finding that could lead to fines – in four separate misdemeanor and felony cases.

The four men involved have been waiting for transfer to a DHS facility since early April, according to court documents.

Charges against the men range from armed robbery and aggravated unlawful use of a weapon to residential burglary, criminal trespass at a residence, violation of an order of protection and domestic battery.

"The department's pattern of noncompliance with court orders to accept and treat mentally ill inmates is both unsafe and inhumane," Wright said in an email.

"DHS admission delays of several months, in many cases, result in significant decompensation of inmates with serious mental illness and jeopardizes the safety of all inmates and jail staff," he said. "These delays further impede the progress of underlying criminal cases and, therefore, justice for crime victims."

State law requires transfers to DHS facilities within 20 days after circuit court clerks send the state documentation of a judge's finding that a defendant is unfit to stand trial.

The pandemic, which required DHS to take steps to prevent the spread of COVID-19 within its facilities while dealing with workforce shortages, caused the backlog to double, according to Sharon Coleman, deputy director of forensic and justice services in DHS's Division of Mental Health.

The average wait for an admission now is 64 days and can be shorter or longer, depending on the circumstances, she said.

Gov. JB Pritzker, responding to the impact of COVID-19 on both available beds and staffing, issued an April 2020 executive order that suspended admissions and the statutory time period for admissions to DHS facilities except at the discretion of DHS Secretary Grace Hou. That executive order remains in effect.

Eighty to 90% of forensic patients transferred to DHS for mental health treatment have been declared unfit for trial, though some have been found not guilty by reason of insanity, Coleman said.

It requires an average of three to four months before patients' mental functioning can be improved enough that they can adequately participate in their cases and be transferred back to jail, she said.

Some patients take longer to reach competency for trial, she said.

"We understand and appreciate our responsibility to these consumers who are remanded to our care and make every effort possible to get people into our hospitals as quickly as we can," Coleman said.

"We are not, in any way, dismissive of the fact that people are in jails when, with sufficient beds and staffing, they should be receiving treatment at IDHS and that the jails are managing a population that they weren't meant to manage," she said.

This isn't the first time law enforcement officials have tried to get DHS ruled in contempt of court for delays in transfers during the pandemic, Coleman said.

Other counties across the state, including Cook, Lake and Winnebago, have requested the rulings, but the department has been able to avoid being found in contempt, she said.

DHS officials told Sangamon County Jail officials June 15 that all four inmates who are waiting would be transferred to DHS facilities by June 24, Wright said. He said that news from DHS came immediately after a court hearing at which Wright asked for a contempt ruling against the state. Circuit Judge Adam Giganti postponed a ruling at least until June 27.

Assuming DHS follows through on its commitment to transfer the four, Wright said he will discuss with jail officials whether to drop his contempt request.

Coleman said she realizes that delays in transfers often would last longer than 20 days even before the pandemic, which began in early 2020. She noted that the General Assembly shortened the transfer requirement in 2018 from a minimum of 30 days to 20 days.

A pilot program began in Cook County before the pandemic to increase the use of "diversion" away from the forensic system for people charged with misdemeanor crimes so they can be treated in community-based outpatient or residential settings rather than in inpatient state psychiatric hospitals, Coleman said.

These misdemeanor defendants represent up to 25% to 30% of jail inmates on the waiting list, she said.

The Cook County program was delayed by the pandemic, but if expanded statewide, could divert some people who are "clinically appropriate" into community-based care and reduce the reliance on inpatient beds in state forensic units, Coleman said.

DHS also is working with county jails and court systems to transfer patients whose mental fitness has been restored back to jail quicker, thus freeing up more beds, she said.

Coleman said the increased isolation brought on by the COVID-19 pandemic likely made mental health issues worse for some people. The operations of community mental health providers also were affected by the pandemic.

Sangamon County Sheriff Jack Campbell said the county jail sometimes has housed inmates for five or six months after they were declared unfit before a bed at a DHS facility became open.

Delays in transfers add to the jail's overcrowding problem, he said, noting that the jail is designed for 314 inmates but routinely houses more than 350.

The jail is housing more and more people with mental health problems, he said. The situation can lead to fights among inmates and risks to jail workers, though no deaths related to mentally unfit inmates have occurred, he said.

"We're not a mental health facility," he said. "We're a detention facility."

Jim Kaitschuk, executive director of the Illinois Sheriffs' Association, said: "There is a huge void in both inpatient and outpatient services for mental health across the state, and according to my conversations with law enforcement, this has been going on for decades when many inpatient facilities were eliminated.