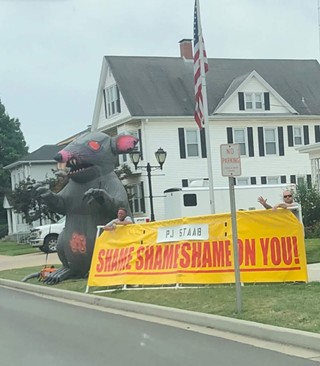 Union roofers staged a protest outside Staab Funeral Homes on July 25.
A 15-foot-tall rat met its demise in front of a Springfield funeral home Monday.

It all started when a group of union roofers were protesting outside Staab Funeral Homes, 1109 S. Fifth St. They objected to the longtime Springfield business using nonunion labor.

As part of the protest, they inflated a giant rat, which is intended to call public attention to companies employing nonunion labor. A woman came out of the funeral home angry.

“She came out running, hollering and screaming and had a knife that was maybe four, six or seven inches long. I don’t know what she was screaming, but she was screaming, and then she stabbed the rat eight times – in the back,” said John Nicks, business manager for Roofers Local 112.

Nicks said he wasn’t afraid until the woman got done stabbing the rat.

“I didn’t know what she was going to do with the knife then,” he said. Nicks said he called the police and the woman returned to the funeral home.

Lauren Staab, 31, a funeral home director, is charged with criminal damage to property. She is the daughter of Paul John Staab II, the funeral home owner who was named on the banner accompanying the inflatable rat.

Staab, when reached by Illinois Times on Tuesday, said she needed to consult with her lawyer to see if it was advisable to be interviewed. The newspaper did not immediately hear back from her.

Nicks said there was not a funeral happening at the time of their protest.

“We would never picket a funeral. That’s just something we would never do. We were well within our rights protesting,” he said. He added he does not believe the flaccid rat can be repaired. The value of the balloon is placed at about $5,000.

The first inflatable rat was reportedly used by the International Union of Operating Engineers Local 150 in Chicago in 1989, according to photos from the Local 150 Engineer. It has now become a ubiquitous means of protesting the use of nonunion labor.

Employers have filed lawsuits charging that the use of giant inflatable rats constitutes unlawful picketing. In 2011, the National Labor Relations Board held that union use of an inflatable monster rat is not considered an unlawful activity when directed at a secondary employer.

Paul John Staab II, president of the funeral home, did not immediately respond to a request for comment.