Is state government ready for Armageddon? 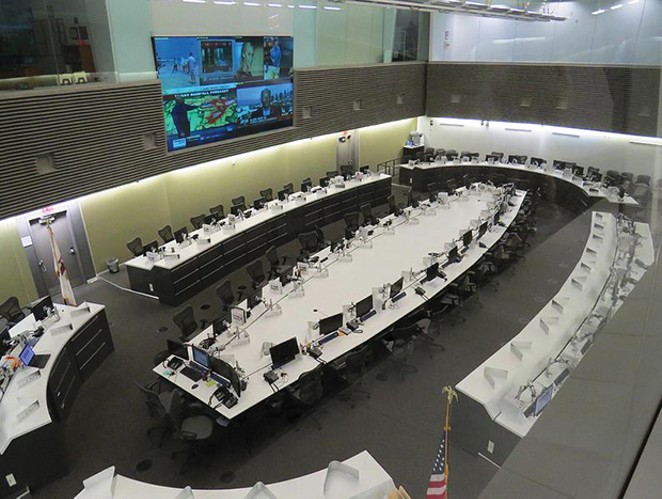 Inside the State Emergency Operations Center.

Oh dear – the North Koreans are threatening the United States with a preemptive nuclear strike. In November, Kim Jong-un ordered a test launch of the Hwasong-15 missile, which has the potential to reach any spot in the U.S. The missile for the moment is incapable of delivering any warhead more lethal than a couple of gallons of fire chicken, but that’s dangerous enough, believe me; maybe what Kim is talking about when he threatens us with “a hail of fire” is gochutgaru chili powder.

Springfield, being a government center, is likely to be in the crosshairs. During the Cold War, remember, it was assumed that the Soviets had targeted the state capital with nukes, presumably because they’d read somewhere about Bill Cellini’s all-conquering patronage army. The basement of the Armory across from the Statehouse was fitted with an emergency operations room from which state officials might safely issue press releases even after the Bomb had reduced the capitol complex parking lots to an even bigger parking lot.

It was in that low, windowless basement that Illinois officials gathered in the hours immediately after the 2001 attacks. Visitors to the war rooms in London will know that Winston Churchill and his aides ran the Allies’ World War II campaigns from just such cramped quarters during the Blitz, but Rod Blagovejich judged such cramped facilities to be inadequate for him. His administration spent 19 million bucks to build a new State Emergency Operations Center (SEOC) on Springfield’s east side on the premise that, of all the things that might be lost in an attack, it is state officials that the taxpayers regard as most precious.

The capital city seems a bit blasé in the face of Kim’s threats. The old town has heard big talk of this sort before now. Usually, the most lethal missiles raining down on the capital have been campaign attack ads; while they are killing our political system, Springfield still stands. Bruce Rauner, you will recall, threatened to shake up Springfield if he was elected, but so far he’s missed his targets by miles.

Rauner seems unafraid in any event. The governor chose to move into the superintendent’s house on the state fairgrounds while the Executive Mansion is being overhauled. A more prudent man would have picked the SEOC, which would make a cozy bunker for a governor whose administration has been operating in a chronic orange alert mode for months. The building is packed with air filtration and blast-proofing protections sufficient to keep the governor and his aides secure even if Dan Proft gets his hands on black-market nukes.

The SEOC was designed by the well-known Chicago firm of DeStefano and Partners and arguably is the most architecturally interesting building the State of Illinois has built in Springfield since the Illinois Department of Natural Resources building went up at the fairgrounds. The architects gave the SEOC a situation room right out of Dr. Strangelove. Arrayed around a giant oval table are five dozen or so computer screens that according to the SJ-R give officials in Springfield “a bird’s eye view of what’s happening in other parts of the state.”

Precinct committeemen used to do that job. We’ve come a long way.

Of course, anyone who has worked for the State of Illinois will tell you that all those computers probably run using four or five distinct operating systems that can’t communicate with each other. They also will tell you that the only guy who knows how to make them work at all usually doesn’t come in until 10 o’clock on Thursdays – something the Reconnaissance General Bureau of the Democratic People’s Republic knows very well, I’m sure.

When they drop the big one, any chief executive would need to know in an instant how to reach the experts whose knowledge would help the commonwealth recover from disaster. Happily, our present governor probably has memorized the only numbers he needs – the private cellphone numbers of McKinsey & Co.’s senior partners in Chicago, the consultants hired to advise Team Rauner on Medicaid reform and computer modernization. Our government would be rebuilt from fire and explosion, but could it survive the shock of McKinsey’s bill?

The SEOC sits on the far east edge of Springfield out by the IDOT building on Dirksen Parkway, but it was built above ground. Even a small nuclear device that targets the Statehouse will reduce the SEOC to landfill as well, with the result that those crucial first hours after the attack would be wasted processing a hazardous waste disposal permit for the rubble. But even if the new SEOC proves adequate for directing post-apocalypse invoicing and permit issuance, it is almost certain to prove irrelevant. Any foreign foe who wanted to paralyze the machinery of Illinois state government during an attack on the nation would want to leave this administration perfectly intact.