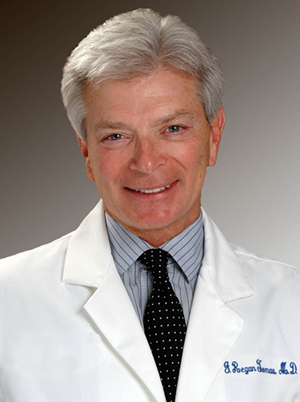 PHOTO COURTESY ILLINOIS STATE MEDICAL SOCIETY
Illinois State Medical Society president Dr. Regan Thomas said the Illinois Department of Insurance should “enhance its enforcement” of a state law requiring insurers to keep their published physician networks up to date.
State officials have asked Blue Cross and Blue Shield of Illinois to prove that its central Illinois health care network remains adequate for meeting patients' needs, despite the loss of more than 600 Springfield Clinic doctors and other providers from its network.

The Chicago-based insurer sent documents to the Illinois Department of Insurance after the department told Blue Cross and Blue Shield on Feb. 18 it must submit a "network-adequacy filing," department spokeswoman Caron Brookens said.

It's unclear when the department will make a decision. All of the potential ramifications of an unfavorable ruling for Blue Cross also are unclear.

"The network-adequacy filing is under review, and the department does not comment on filings that are under review," Brookens said in an emailed response to questions from Illinois Times.

"If an insurer fails to provide an adequate network and the consumer makes a good-faith effort to access in-network care, the insurer must allow a consumer to access an out-of-network provider at an in-network rate," she said.

Blue Cross, the largest health insurance company in the state, removed Springfield Clinic from its preferred-provider network in November as part of a contract renewal dispute over reimbursement rates.

The situation has forced patients and their employers to decide whether to switch insurance carriers – if that's an option – or seek care from medical groups outside the for-profit clinic, which is based in Springfield and provides care at 90 locations in more than 20 downstate counties.

Employees and their family members still covered by Blue Cross have had to decide whether to pay higher out-of-pocket costs for sticking with clinic doctors now classified as out-of-network providers.

Blue Cross members being treated for a disability, acute condition, life-threatening illness or in the third trimester of pregnancy have been able to ask Blue Cross for "continuity of care" approval to pay in-network charges when seeing their clinic providers.

Both Blue Cross and Springfield Clinic say they have negotiated in good faith but haven't been able to work out a deal that would put the clinic back in the Blue Cross network.

It's unclear when or whether a resolution to the conflict will be reached, and insurance analysts in the area have said some Blue Cross members have postponed leaving the clinic and establishing relationships with other groups such as Southern Illinois University School of Medicine, HSHS Medical Group and Memorial Health.

"The reality is there aren't enough in-network options in this area, and BCBSIL's decision to terminate Springfield Clinic from the PPO plan has forced countless people to forgo or delay care," clinic spokesman Zach Kerker said in February.

Kerker said in an email on March 11 that clinic officials "applaud the Department of Insurance efforts to protect access to excellent health care for patients in central Illinois."

Blue Cross spokeswoman Colleen Miller said in an email that "many members are finding and using care provided by the approximately 3,000 providers in our network in central Illinois."

She said the insurer continues to increase the number of primary and specialty care providers in its network and "welcomes the opportunity to help members who are having a hard time finding an available provider."

A recent WCIA-TV broadcast on the dispute said Blue Cross' online directory of Illinois providers contains inaccuracies that could be frustrating to patients trying to find new doctors.

"Illinois doctors urge patients to file complaints with the Illinois Department of Insurance whenever they experience these 'ghost network' issues," he said.

Miller said Blue Cross is updating its online provider listings daily "as we receive updates from providers on things such as their availability to take new patients, and if we find errors, we work quickly to correct them."

Blue Cross has 1,500 employees in the Springfield area who are among patients who may need to find new providers because of the departure of Springfield Clinic, she said.

"But it's for those members/employees that we had to stand up to Springfield Clinic's baseless demands for higher rates," Miller said.

"The fact is, despite the lower cost of living in Springfield compared to Chicago, Springfield Clinic's rates are 60% higher even than in Chicago – and the for-profit entity sought to raise them even more," she said. "That burden would fall on all members and employer groups in central Illinois."

Clinic officials have said financial demands by Blue Cross would harm the clinic's ability to attract and retain doctors in the Springfield area.

Blue Cross at first contended the removal of clinic providers was not a "material change" that required the company to prove its network was adequate, Brookens said in an email.

"IDOI has been in communication with BCBS on this issue since the fall of 2021," Brookens said. "After reviewing the matter, IDOI informed BCBS that it was a material change ... ."

Based on the department's "network adequacy checklist," which is available at bit.ly/ILinsurancechecklist, network adequacy is based on a variety of factors. They include maximum travel distance or driving time for primary care and specialty care, the ratio of providers to enrollees and whether doctors are accepting new patients.

For example, the department says that in urban areas, the maximum recommended distance for patients to travel for primary care is 30 minutes or 30 miles, and in rural areas, 60 minutes or 60 miles.

Patients can file a complaint with the department if they believe an insurer isn't honoring terms of their policy regarding charges for in-network versus out-of-network providers, Brookens said.

Information on how to file complaints is available online at bit.ly/DOIcomplaint or by calling 877-527-9431.

Miller, the Blue Cross spokeswoman, said, "Upon hearing concerns about how continuity of care claims are being processed, we will be reviewing the claims of all 1,400-plus members receiving continuity of care at Springfield Clinic.

"If we find any errors, we will make them right," she said. "Those members don't have to take any final action. We'll be reaching out with letters and phone calls explaining the additional review."

Dean Olsen is a senior staff writer with Illinois Times. He can be reached at dolsen@illinoistimes.com or 217-679-7810.