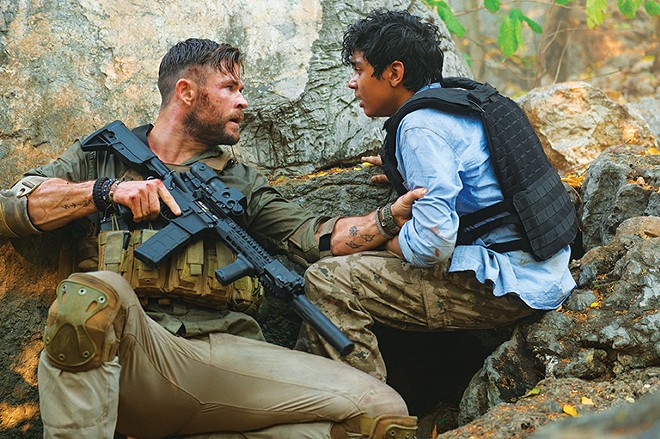 It's funny the things you end up missing. Since movie theaters have closed, I find myself yearning to see a bigger-than-life, Hollywood production wash over me, the kind that, through its sheer size, overwhelms and takes me away. And while I've had more than my fair share of rote action films, I wouldn't mind seeing an ear-splitting shoot 'em up on the big screen that overwhelms and impresses me with its sheer ridiculousness. Though it's restricted to the small screen, Netflix's Extraction nearly fits the bill. Smarter than the usual action fare, the film checks all the boxes where movies of this ilk are concerned and provides more than enough thrills. As long as the bullets are flying, this feature's on solid ground; it's during its quiet moments where it stumbles.

Sporting the perfect action hero name, Chris Hemsworth is Tyler Rake, a mercenary with more than a few aches and pains as well as a murky past. While enjoying a much-needed break, he and his team get an offer they can't refuse. The son of Bangladesh drug lord Ovi Mahajan (Pankaj Tripathi) has been kidnapped by a rival and is being held for ransom. Rather than suffer the humiliation of paying it – and for other reasons that cannot be divulged here- he has one of his cronies hire Rake and his crew to get the boy back. They have 16 hours and the clock is ticking when boots hit the ground.

Former stunt coordinator Sam Hargrave helms his first feature and the results are, at times, impressive. The action sequences are executed with a precision that's impressive, the choreography razor sharp. Of particular note is an eight-minute, unbroken take that starts with Rake and his young charge in a car being chased down the narrow streets of Dhaka, which results in a crash that leads to a foot race that takes the duo into a building, up stairs, over roofs and back down through another building to safety...or so it seems. Numerous bouts of hand-to-hand combat take place during this intricately executed scene, Hargrave's handheld camera catching every punch, gunshot and injury along the way. This is immersive filmmaking at its best, genuinely exciting and innovative, the sort of sequence that has you unconsciously leaning forward in your seat as you watch it unfold.

This, and the final sequence that takes place on a bridge under siege are impressive. However, efforts to add a bit of poignancy to the story fall flat. The bond that forms between Rake and Ovi Jr. (Rudhraksh Jaiswal) is never convincing, a convenient by-product of the story rather than something that grows organically out of the narrative. The revelation about Rake's past falls flat once it's revealed, while a sequence between him and an old friend (David Harbour) with duplicitous motives nearly brings the film to a complete halt.

To be sure, like so many of today's genre entries, the film overstays its welcome. Trimming 20 minutes would have made for a far more taut and impactful movie. Yet, there's no denying that Hargrave has a good feel for all that's going on here. Much like Chad Stahelski, another former stunt coordinator who stepped behind the camera to great success by helming the John Wick trilogy, Hargrave brings a fresh perspective to tired action conventions. Extraction is not without its flaws, but when it's firing on all pistons, it's quite impressive and serves as an effective calling card for a director who shows great promise.