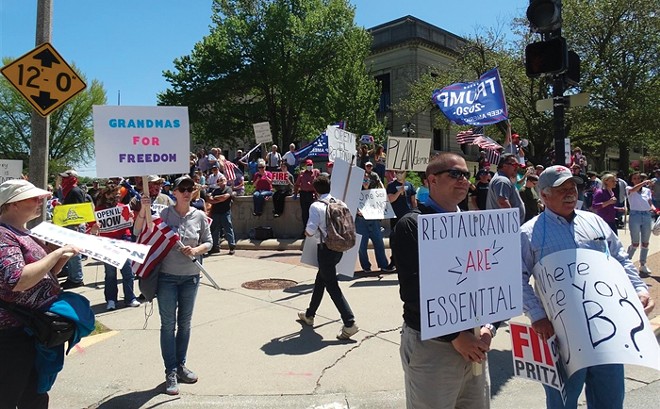 Photo by Peter Hancock
People rally in front of the Capitol in Springfield demanding Gov. JB Pritzker "reopen" Illinois for business amid the COVID-19 pandemic.

I thought this would be easier.

Six months ago, when the stay at home order took effect, I took a 21-pound turkey out of the freezer, which had been purchased on sale after Thanksgiving and reserved for a special occasion. Pandemic is a once-in-a-lifetime event.

This was back when Christmas music was playing on St. Louis radio and Hallmark was streaming holiday movies across the nation: Bedford Falls is a big tent, and we'll get through this together. After five days of thawing and nearly as much time on a Weber kettle, my turkey was ready, and it was spectacular. When it was gone, I figured I would roast a ham, and when that was gone, I figured we'd be finished with this and everyone would be back to work.

The last drop of turkey soup was consumed long ago. I haven't mustered my Easter ham. With May's arrival, it feels like halftime, even though lots of people say we're closer to the beginning than the end. I'm tired of this game: Let's play mumps.

Christmas music and movies have disappeared, replaced by marathon sessions of "The Waltons," James Bond and "Pawn Stars." Live entertainment has all but vanished with President Lysol's curtailment of press briefings. There have been few advantages. It's been awhile since $1.59 gas seemed pricey. Regular showers are optional, and you can do the dishes while listening to boring parts of court hearings or city council confabs. People have rediscovered the voice part of a telephone. There's been plenty of time to listen hard and determine, once and for all, whether Dusty Springfield's or Dionne Warwick's is the definitive version of "The Look of Love." I can't think of anything else good, and none of these things come close to making up for the bad.

Hard as it's been, pollsters say that most of us approve of the state's stay at home order. Those who don't descended on the Capitol and the Thompson Center last week. They were not as nutty as those who toted assault rifles into the Michigan Capitol, where authorities were nutty enough to allow it. But they were still plenty nutty.

It wasn't the swastikas and Hitler mustaches drawn on photos of the governor and the "Arbeit macht frei" sign – words taken from the gates of Auschwitz – that bothered me. Bigotry, like other contagions, takes no holiday but, hopefully, isn't catching. Always, there have been people like this, and that an all-out effort drew 1,000 or so between Springfield and Chicago isn't necessarily a bad thing in a state that's home to more than 12 million people.

"I feel we all have enough common sense to safely guard ourselves," one protestor at the Capitol told a TV reporter. She looked north of 60 and, like most everyone else, wore no mask amid the crowd. Protestors were equally clueless in the days leading up. "We have room for five more in our rented van if anyone would like to join us in Chicago," offered a woman on Facebook who later changed the destination to Springfield. Someone else wrote that she doesn't like to drive in downtown Chicago, so she'd park her car and take the L train to the Thompson Center. Nothing like public transportation in the city hardest hit by pandemic.

Then again, maybe the protestors are right. Perhaps we're in an unwinnable war against disease, and so why not open the state and get the dying over with? Pretty much, that's what they've been doing in Sweden, where old folks – and there are fewer of them now than there were a couple months ago – are hunkered down. Who are we to challenge an inevitable culling of the herd by Mother Nature, who has always picked on the oldest and weakest? It may sound macabre, but it might also be rational. No one yet knows.

We have, at once, too much information and not enough knowledge. Overnight armchair coronavirus nerds have become cheap – conjecture from politicians or bloggers or journalists or anyone else who didn't go to medical school and isn't an epidemiologist is wasted breath. There have been too many stories about imminent cures and the virus spreading through HVAC systems and peaks that will hit in three days, no wait, next week, no wait, maybe next month.

I am lucky. I still have a job, and my health and my bunker. Today, I ordered groceries for my mother, who is 2,000 miles distant and prone to forgetting where she parked and where the eggs are when she goes to the supermarket. Then I looked in my own fridge.

The expiration date on my ham is June 30. With any luck, I'll be eating ham-bone beans by Independence Day.