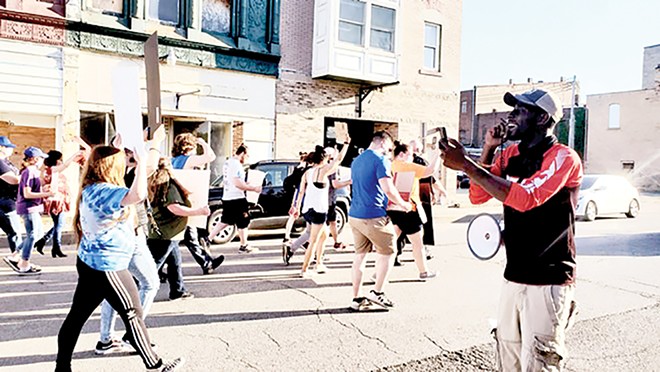 Chadwick Workman of Langleyville leads a march in Taylorville on Thursday, June 4.

Chadwick Workman attended his first demonstration less than a week before organizing his own. Like many young adults, he's been moved to act in the wake of another highly publicized police killing of a black man. The Taylorville show of unity against racism on Thursday, June 4, brought out hundreds of people who marched to the town square, following behind him.

Workman had also demonstrated at an event in Springfield earlier that week, attended by more than 1,000 people.

In Taylorville the crowd heard testimony about the harmful effects of racism. According to U.S. Census Bureau estimates, as of 2019 there were 10,360 residents, 96% white. Some locals sat and stood from a distance outside businesses to offer water or observe. One man led a solitary march carrying an American flag and a Gadsden flag – with a snake and the words, "Don't Tread on Me."

Workman prefers to call the event a rally verus a protest. He said his hope is for all people to feel compelled to stand up against injustice. For nine minutes, about the same amount of time George Floyd was knelt on by a police officer in Minneapolis, there was silence, except for Workman emotionally uttering Floyd's last reported words: "I can't breathe ... They're going to kill me ... Everything hurts ... Mama."

Much of the crowd began a "lie in," their bodies on the pavement outside the courthouse to show solidarity for Floyd and others killed by police. Taylorville resident Misty McPeek helped coordinate donated drinks and food for the event. As the white mother of black sons, she took to the podium to plea for widespread change.

Ryan Bandy, who owns businesses in Springfield, including the LGBTQ bar and venue Club Station House, said he was there as the result of deep soul searching in recent days. "I've had a lot of reflection on my views, and know I have been ignorant, quite honestly, on some things." Bandy said he had posted something on Facebook "pretty much equating that property damage and murder were both equally wrong." He credits a black transgender friend in particular who shared "the things that she's dealt with and the pain that she's feeling." Bandy said it made him realize he needed to do more listening.

Bandy's uncle is U.S. Rep. Rodney Davis, a Republican from Taylorville. In the 2016 election, Christian County, where Taylorville is the county seat, nearly 70% of voters went for Trump. Some said the success of the rally was especially heartening for that reason.

Police had closed off roadways and several were present during the demonstration. A couple spoke at the podium.

Christian County Sherriff Bruce Kettelkamp told the crowd, "I want you to know that every law enforcement officer in Christian County is sickened by what happened by those four officers in Minnesotta, we are absolutely sickened."

Workman said people had asked why he chose to come to Taylorville. What many didn't realize was he lives in the area. To his knowledge, his was one of the first black families to live in Kincaid, also in Christian County. He said growing up there "was tough, God was it tough."

Across downstate Illinois, similar protests have surfaced in a number of other small towns. Workman attended a Black Lives Matter Jacksonville event on Sunday, June 7, and said he's moved by the actions, some of which have happened in towns like Anna, former sundown towns where black people were not allowed after dark.

Workman is part of a newly formed group based in Springfield called E.A.T – Education and Action Together. Workman said a teach-in is being planned "where people can learn their rights when dealing with police officers – how to interact with the police officers to keep the situation from being escalated." And the group will rally in Pawnee on Saturday, June 13.