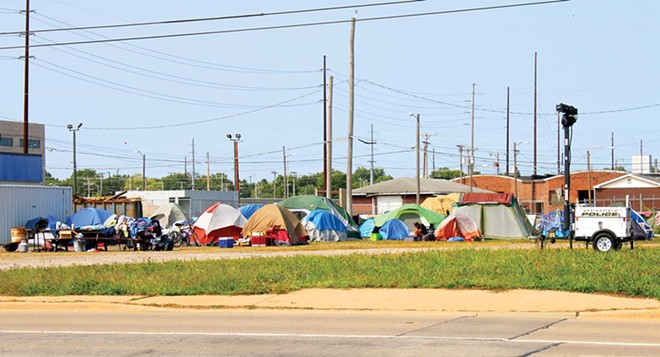 "Those are conversations and plans that should've been underway long before now," said Ward 3 Ald. Doris Turner at a recent Springfield City Council meeting, referring to the lack of a plan for housing the homeless as seasonal cold draws near.

Springing up in late July, an encampment for about 50 homeless people known as Tent City is located behind the Warming/Cooling Center at 1015 E. Madison. Volunteers bring ice and food daily, as well as other supplies, such as tents, air mattresses and blankets. Tent City also offers a sense of group safety to the community of homeless people who stay there, especially for women. Possessions can be locked in a storage unit overnight to keep theft at bay.

Springfield resident Julie Benson formed a nonprofit called Helping the Homeless in January 2016. At first, she sought donations for hats, coats, gloves and blankets and drove around Springfield to find homeless people to give them to. Three years later, when she retired from Henson Robinson Company, the business gave her a cargo van to help her homeless ministry.

Benson is a daily visitor to Tent City, opening the Warming/Cooling Center for showers three times per week and taking laundry to Washington Street Mission, where volunteers wash individual loads between shower days. "It makes a world of difference to be clean and to put on clean clothes," said Benson. She also coordinates volunteers to make sure meals are delivered for breakfast and dinner daily.

As Springfield residents become more aware of people standing on corners or sleeping in alleys, Benson said, "People need to know they do this out of desperation. Most people don't want to be homeless. They lose hope. We have to be more compassionate. If you take the time to listen to their stories, they are not different than us."

Although Tent City is a small, organic step toward a centralized location offering services, Springfield resident and OpenWorld Relief volunteer Lynn Ehmen says it's not a sustainable situation. "They need something long term," she said, noting that winter is just around the corner. "So much of what they need could be remedied by having them in a building." Ehmen is a frequent volunteer through the Springfield Families Helping Families Facebook page, which assists a wide variety of individuals, including people who are homeless, struggling to keep their housing or trying to get back on their feet after being homeless.

The pandemic has complicated what was already a challenging task. "For many years, the agencies in town have been using their resources to the max," said Caleb Payne, director of development and community outreach at Inner City Mission. He noted that even though needs have increased, most agencies that serve the homeless are operating at limited capacity due to COVID safety guidelines. Inner City Mission, like many of the shelters, is currently at 50% capacity.

Governor JB Pritzker's moratorium on evictions is currently set to expire on Sept. 22, although it has already been extended to allow time for the state to put assistance programs in place for tenants struggling to pay rent. However, the number of homeless people may well explode in the coming months, as The Aspen Institute estimates that well over a million Illinois residents will be subject to evictions.

"It's scary to think about," remarks Ehmen. In a city that already has homeless it cannot shelter, Springfield's homeless population may continue to swell, with a pandemic and cold weather complicating any kind of relief plan. However, Payne said he remains optimistic.

"The hope is that going forward, a long-term strategic plan is being put into place. This may be the last year we need a winter warming center to operate as such," Payne said. "The hope is there will be some plans developed toward more permanent housing as winter ends."

In addition to providing assistance to individuals and families about to become homeless in order to keep them housed, other cities have had success utilizing the Housing First approach. This aims to provide no-strings-attached housing for chronically homeless individuals, with assistance for addiction or mental health issues provided upon request. The Housing First model has drastically lowered homelessness in cities across the nation, with a far smaller price tag than reactive services, such as jail or emergency room services.

"Housing is the answer," affirms Benson. She estimates that there may be a half-dozen homeless people who prefer to live outside, but the vast majority would prefer to be housed. "I think we have to come together to do better," said Benson.

Carey Smith is a Springfield resident who was homeless only briefly due to a strong social support system.