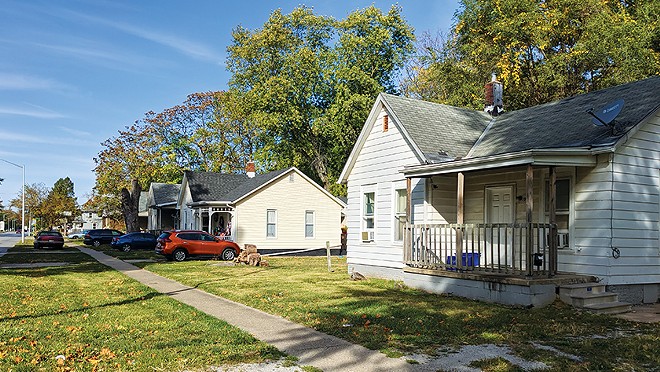 Luann Hickman's house on East South Grand Avenue is one of the nicest on the block. Which isn't saying much.

Like too many other East Side neighborhoods, Hickman's has seen better days. Paint flakes from nearby homes, several of which need new roofs. Fire has destroyed a garage and scorched the back of Hickman's house. The alley in back is choked with weeds, branches and other debris. The home's front is decorated with wreaths for all seasons: A sign near the porch declares them for sale. No one answers the door.

Hickman has lived here since 1993, thanks to Habitat for Humanity, which renovated the home and set up a contract for deed. Hickman made the final $100 monthly payment in 2017.

Last week, the Springfield City Council agreed to buy the property for $51,000, the value established by an appraiser after the garage fire, plus provide an additional $135,190 for relocation expenses. The property, the city says, is needed for a railroad improvement project. On paper, at least, Hickman appears to have done well. But there is more to this than paper.

Issues include disabilities. The city is allocating $32,000 for accessibility features in Hickman's new home – her current abode has a wheelchair ramp outside. "She's 62 years old," Ward 7 Ald. Joe McMenamin observed before the 7-2 vote – proponents called it a hardship case. "From what I understand, she's not wheelchair-dependent now, but she anticipates being in that way down the road."

In addition to purchasing Hickman's home, the city, as part of relocation expenses, will provide $78,900 to ensure that Hickman's new house will be like her old one, which meant finding a three-bedroom, two-bath ranch with a basement and a certain number of square feet, says Steve Warren, land acquisition manager for Hanson Professional Services, the engineering firm that is guiding the project. The search, he says, took six months. It is not clear how far Hickman's new $129,900 house might be from railroad tracks.

The public purpose in play may never play out. The city says that we will, eventually, need Hickman's house to make room for a railroad overpass on South Grand Avenue at 19th Street, but there is no construction money or timetable. With four overpasses yet to be built, funding hasn't been secured to complete an expansion of the 11th Street rail corridor eight blocks west of Hickman's house and eight years after a plan was approved. That project has priority.

In arguing to spend more than $186,000 of somebody else's money to buy out Hickman – the city figures on getting reimbursed by the state — Ward 3 Ald. Doris Turner reminded colleagues that the proposed underpass is in the same federally approved plan that includes the 11th Street project. But railroad realignment and improvement schemes, mostly unrealized, have been around nearly a century. What chance is there that we'll be shoveling dirt on 19th Street any time soon, and for what purpose?

Former Ward 2 Ald. Frank McNeil, who lives a block or so from Hickman, says the number of trains is down to two or three a day, considerably fewer than when he moved to the neighborhood in 1988 – the feds tallied four trains a day in the 2012 plan that calls for buying 21 homes, including Hickman's, to make room for the South Grand overpass. The trains through his neighborhood, McNeil says, mostly carry coal. How long will that last? Ward 2 Ald. Shawn Gregory says he expects the overpass and another planned for Ash Street to help beautify east side neighborhoods, and he's been promised by Hanson officials that the projects will come to pass: "They've assured me it's a real thing and not smoke and mirrors," he said before the vote. Considering the uproar in Ward 6, where residents say railroad overpass construction has damaged foundations and harmed home values, the alderman might consider what he wishes for.

Ward 6 Ald. Kristin DiCenso said she's not voting to acquire anything until the city addresses complaints about 11th Street railroad construction in her ward; McMenamin, who also voted no, observed that the city will lose property tax revenue and now must demolish the house, then mow grass indefinitely until the promised overpass comes through. "It all adds up to about $180,000 to relocate someone in a home that's assessed at $30,000 by the tax assessor for bridge construction that might not take place for 10 years," the alderman calculated.

Last month, the council balked at buying four rental houses across the street for $101,500 whose owner, like Hickman, asked for hardship consideration – he's living in assisted care and can't look after the property, says Warren, Hanson's acquisition manager. Turner, who voted to table the deal, says there's no comparison to the Hickman purchase. "Those properties were vacant and dilapidated – they were unoccupied and never will be able to be occupied," she said before last week's vote.

Laws governing property acquisition with public dollars are strict. The government, for example, must provide decent, safe and sanitary housing for displaced people, no matter the condition of homes purchased, Warren said. Generally speaking, I asked, do you have an opinion on whether some folks end up better off after getting bought out?

"My opinion is, when the state comes to buy your property, it's not always a bad deal," he replied.