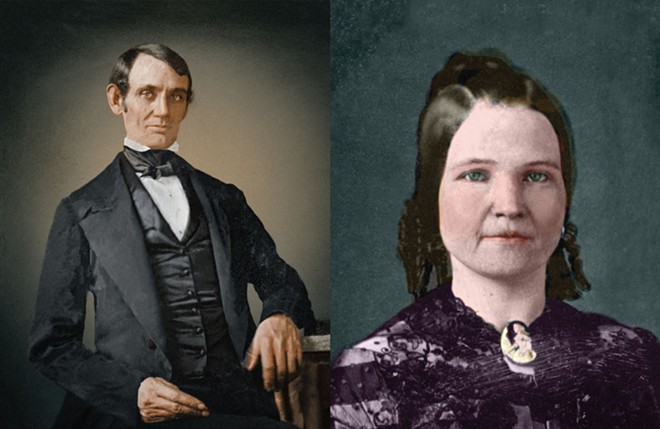 The first known photograph of Lincoln, taken when he was in his mid-30s, by Nicholas H. Shepherd circa 1846 in Springfield. Robert Todd Lincoln wrote that this “daguerreotype was on the walls of a room in my father’s house from my earliest recollection as a companion picture to that of my mother.” Growing up in central Illinois, the noted geologist John Wesley Powell observed Lincoln and said “this is Lincoln as I knew him; his sad, dreamy eye, his pensive smile, his sad and delicate face, his pyramidal shoulders, are the characteristics I best remember.” From the Library of Congress, colorized by Jordan J. Lloyd, Dynamichrome, UK. Right: The first known photograph of Mary Todd Lincoln, circa 1846, when she was in her mid-20s, taken by Nicholas H. Shepherd in Springfield. From the Library of Congress, colorized by Gary M. Wilcox of Summersville, WV.

Hear the name "Lincoln" and you see the man splitting rails, say, or on a debate platform towering over Stephen A. Douglas. Few recall the soon-to-be president being shooed out the front door of his house in a hail of potatoes. But that image of Lincoln was as valid as the others, as we learn from An American Marriage: The Untold Story of Abraham Lincoln and Mary Todd (Pegasus, 2021), the newest work from Lincoln biographer Michael Burlingame.

The long-maligned William H. Herndon, Lincoln's law partner and biographer, was the first major biographer to suggest that the marriage was hell for Lincoln. That opinion (or more accurately, putting it in print) got Herndon damned in polite circles for years as a Mary-hater. Burlingame, who holds the Chancellor Naomi B. Lynn Distinguished Chair in Lincoln Studies at University of Illinois Springfield, has burrowed through what is known about the Lincolns' married life and added much new material harvested from newspaper accounts only now becoming accessible to researchers. His conclusion? Herndon didn't know the half of it.

All happy marriages are alike, you could say, but every unhappy marriage is unhappy in its own way. As the Lincolns' marriage is reconstructed by Burlingame, Lincoln was a long-suffering victim of Mary Todd, who was a victim of a legion of demons. Her father was a neglectful father and her stepmother was a villainess right out of a fairy tale. Her family showed tendencies toward mental instability. She herself was described by a neighbor as "nervous and crazy acting," fearful of storms, peddlers and pets. 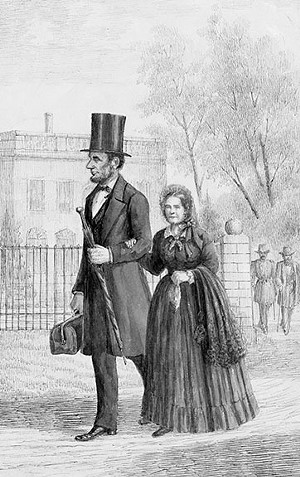 From the National Portrait Gallery, Smithsonian Institution, Washington, D.C.
The Lincolns strolling by the White House, drawing by Pierre Morand, 1864. Morand, a French businessman, met Lincoln in Washington during the Civil War and recalled that the president’s “features and movements impressed me so vividly, that I made several good sketches of him in various attitudes in June, 1864.” There is no photograph of the Lincolns together, for the five-foot-two-inch First Lady did not want to be shown dwarfed by her six-foot-four-inch husband.

We have learned to be skeptical of male complaints about inconvenient women, but Mary Todd by all accounts was a trial to deal with. As a younger woman, Mary Todd was an ornament to a party, but running a household in those days demanded a temperament that she lacked. She had been raised with the help of servants and thought housework to be beneath her. Lincoln did the dishes and the grocery shopping, sat (sometimes inattentively) with the kids. She was capable of assaulting the hired help to the point of injury, and attacked Lincoln physically as well. People who knew him speculated that Lincoln continued to endure riding the judicial circuit in central Illinois after he could afford not to because it gave him a chance to get away from Todd for months each year.

Burlingame casts light on a question that had puzzled dozens of their friends and family – why did they wed? People who knew each partner best thought them a poor match. Lincoln, realizing that they were ill-suited to each other and smitten by another woman, broke off the engagement for a time. But friends and acquaintances reported that Lincoln was tormented by the thought that he had treated Mary badly. The dilemma Lincoln thus found himself in left him so wretched that friends fretted for his well-being. Herndon provides a knowing explanation, which Burlingame seconds. "Lincoln knew that he did not love the girl: he had promised to wed her: he knew what would eventually come of it and it was a conflict between sacrificing his honor and sacrificing his domestic peace: he chose the latter – saved his honor and threw away domestic happiness."

Some readers will ask, who cares? For a long time, few historians cared about the marriage, it being judged irrelevant to his public career. In his preface to Here I Have Lived, the late Paul Angle eloquently argued that Lincoln could not have become Lincoln had it not been for nine circumstances of life in Springfield that informed and tested him. Angle did not include among them Lincoln's courtship and marriage. 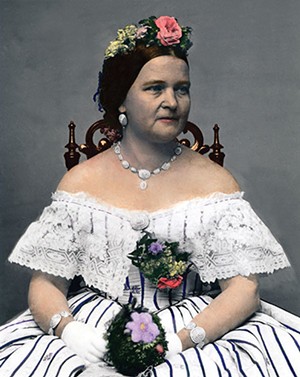 From Everett Collection Historical / Alamy Stock Photo.
Mary Lincoln in 1862, detail of a photograph by Mathew Brady, later colorized by Alamy, Brooklyn, NY. It is one of at least nine poses taken by Brady during that sitting.

For his part, Burlingame argues that the marriage is important because Lincoln is important, and because Lincoln was shaped by his marriage. That she played a part in his political rise is pretty much undisputed, although claims that Todd favored her husband with political insight, even that she was counselor to Lincoln, are fanciful. Certainly, she liked to talk politics with the men, although one suspects that politics might have been for her merely another form of gossip – or because it made her the center of attention in male company.

Still, Burlingame argues, "Lincoln may never have become president if his wife had not turbocharged the restless engine of his ambition." She was talking about making him president when they were courting; she wrote a friend, "You will see that, as I always told you, I will yet be the President's wife." Burlingame also gives Todd some credit not only for making Lincoln a president but for making him a great president. Lincoln's marriage to this daughter of slave-owning Southerners was his own private Civil War, a domestic saga of insurrections and betrayals and heartbreak, and Burlingame suggests that President Lincoln's preternatural ability to deal with difficult people owed to his having had "so much practice at home."

The publisher describes B's as the "untold story" but the story has been told by Burlingame himself in his previous major works – Abraham Lincoln: A Life and The Inner World of Abraham Lincoln. This version is, if not more nuanced, certainly more amply documented. When it comes to Todd, it sometimes seems that no stone was left unthrown. Even people who had nothing to say said it in ways critical of that unhappy woman. Lincoln relative Harriet Hanks, who lived with the Lincolns for a time, wrote to Herndon that she "would rather Say nothing about his Wife[;] as I Could Say but little in her favor I Conclude it best to Say nothing."

Burlingame, in contrast, is determined to say everything. In his method, Burlingame resembles Springfield attorney Logan Hay, longtime president of the Abraham Lincoln Association, who in the 1920s set that organization to collecting all the known facts about L's life (to borrow from A. J. Liebling) "as if he was preparing a lawsuit." He does not intend to contribute to the debate about the nature and significance of the marriage but to settle the question once and for all. The present book runs to some 300 pages, and that total does not count his research notes, which Burlingame has published separately on the website of University of Illinois Springfield. In an appendix he adds his appraisal of the literature on the Lincolns' marriage, for which the serious student will be grateful.

Some readers will find Burlingame unsympathetic, even cruel, in his relentless cataloging of Todd's failures as a human being and as a wife and mother. But an historian is not a therapist; his or her responsibility is to understand, as in "comprehend," not as in "sympathize with." Burlingame at least treats Mary Todd as a person and not only the Little Woman, as too many historians have done. Few readers will put down the book without having learned something new about her, about Lincoln, and about the mystery that is a long marriage. 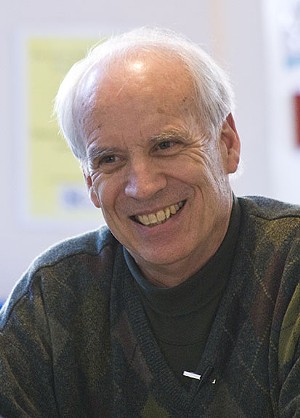 In Springfield it's not what you know but who, and Michael Burlingame knows Abraham Lincoln better than anybody. It was to learn even more that Burlingame came to Springfield in 2009 after teaching at Connecticut College for 33 years to an endowed chair in Lincoln studies at University of Illinois Springfield and a flat across the street from one of the great collections of Lincolniana in the nation.

As editor and author, Burlingame has crowded the library shelves with 16 volumes on Lincoln and his world, including what is widely considered the definitive biography, the two-volume Abraham Lincoln: A Life (Johns Hopkins University Press, 2008). –JKJr.

Longtime IT contributor James Krohe Jr is the author of Corn Kings and One-Horse Thieves: A Plain-Spoken History of Mid-Illinois. His own writing about Lincoln is at https://www.jameskrohejr.com/lincoln-pieces-main-page.