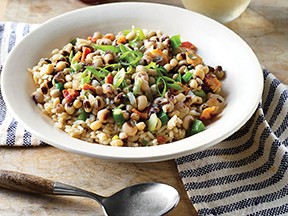 After weeks of holiday indulgence, a simple supper of slow-simmered beans has always been a welcome New Year's Day custom. My great-grandmother w ould always make a pot of beans on the first of January, flavored with copious amounts of onion and the ham bone left over from Christmas Eve. Only recently have I come to appreciate how this tradition, like so many in our culture, traces a direct line right through to the founding of our nation and to the souls of those who worked to build it.

It's likely that the origins of my grandmother's New Year's Day ham and beans is closely linked to our nation's history of slavery. In his book, Low Country Cooking, historian and cookbook author John Martin Taylor explained that in the early days of colonization new plantation owners tested many different crops to discover what would grow best on the land they were occupying. Rice turned out to grow particularly well on southern plantations, which in turn steered the direction of the slave trade. People from rice-growing regions in west Africa were forced to come work in the new American rice industry. Eventually black-eyed peas, a staple food in west Africa, became an established crop in the American south as well. With these two key ingredients now available, the enslaved west Africans were able to prepare a meal reminiscent of their homeland. The meal would later come to be known as Hoppin' John.

There are many theories about how eating Hoppin' John on New Year's Day came to represent prosperity and good fortune in the years to come. In an effort to learn more I stopped by the Springfield and Central Illinois African American History Museum (AAHM), located just outside the gates to Oak Ridge Cemetery on Springfield's north side. This small but impactful museum celebrates the history and contributions of African-Americans in central Illinois and the nation. There I was connected with Kathryn Harris, who worked as the library services director for the Abraham Lincoln Presidential Library and Museum before she retired, and now sits on the board of the AAHM.

"We've eaten black-eyed peas every New Year's Day for as long as I can remember," Harris told me. "We were told growing up that we would have Hoppin' John and some kind of greens on New Year's Day. The black-eyed peas represented change, and we would always have some kind of greens, either collard greens, mustard greens or even cabbage. I like to make cole slaw – and the greens represent greenbacks, prosperity in the new year." Harris said that her mother would always use ham hocks in her black-eyed peas, but in these health-conscious times she's taken to using turkey instead.

Black-eyed peas can also be made vegetarian. Jerome Taylor, chef and owner of MJ's Fish and Chicken Express, makes a simple pot of black-eyed peas for his family on New Year's, flavored with onion and vegetable broth, sans rice, served with cornbread and greens on the side. The black-eyed peas, he said, were an essential component of any New Year's celebration. "My mom would always make a pot of peas on New Year's, even if it was just a small pot. You had to have them." MJ's doesn't have black-eyed peas on its menu, but it does make killer red beans and rice, which also happen to be vegetarian. They also serve amazing collard greens and fried cabbage. A smart person would call ahead on New Year's Eve and order a few servings of Chef Taylor's delicious soul food to take home and reheat for a sublime lunch the following day.

I'm not a smart person, so I'll probably make a big old mess of my kitchen, shredding ham hocks and collard greens and regretting that last celebratory glass of champagne from the night before. Harris, a self-described "cookbook fanatic," was kind enough to send me a few of her favorite recipes for Hoppin' John. This recipe is adapted from renowned cookbook author Jessica Harris' contribution to Celebrating our Mothers' Kitchens, a compilation cookbook published by the National Council of Negro Women.

Heat oil in a heavy-bottomed soup pot over medium high heat. Add ham hocks or turkey wings and onion and cook, stirring, until golden brown, about 8 minutes. Add 8 cups of water, peas, salt and herbs. Bring to a boil, then reduce to low and simmer, covered for two to two and a half hours or until the beans are tender but not mushy. Remove ham hock and pull off the meat once cool enough to handle. Shred the meat and return it to the pot with the beans. Add the remaining two cups of water and bring to a boil. Stir in the rice and reduce heat to low. Simmer 20 minutes or until rice is tender. Add additional water to adjust the consistency as needed. Serve hot with a side of greens and cornbread. 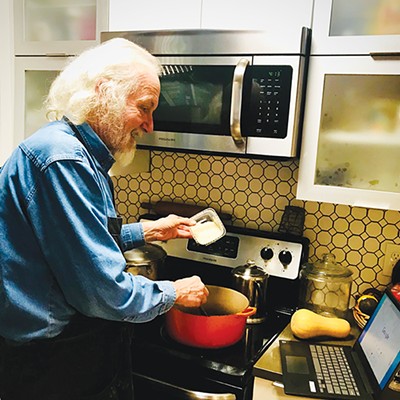