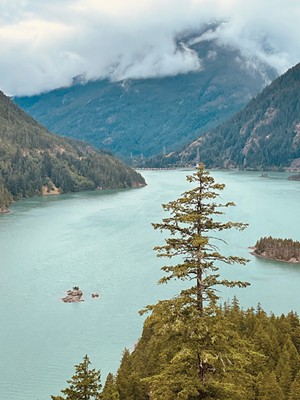 Photo by Ann Shaffer Glatz
The view from Desolation Peak where Jack Kerouac worked as a U.S. Forest Service fire lookout.
I spent the first month of the summer working at a camp in Washington's Cascade mountains with a cellphone signal that flip-flopped between one bar and "No Service." Though I was by no means "off the grid," I wasn't able to get my Facebook and Instagram feeds to refresh, so I pretty much gave up looking at my phone (which actually was a healthy thing). Presently I'm taking some time off from cooking to explore the beauty of the Pacific Northwest, to recharge my physical and emotional batteries, and rediscover my creative muse.

The first stop on my vacation/pilgrimage was Desolation Peak in the North Cascade Mountains. This is where the poet and novelist Jack Kerouac spent 63 days during the summer of 1956 working as a U.S. Forest Service fire lookout, seeking solitude and inspiration for his writing. I was hoping to be similarly inspired. I slowly surveyed the rugged beauty before me, channeling Kerouac. I also found the North Cascades to be "unbelievable jags and twisted rock and snow-covered immensities, enough to make you gulp."

I left Desolation Peak relaxed, refreshed and rejuvenated. And inspired. As I descended from the mountaintop, I began to conjure up ideas for this week's Illinois Times column. The flow of my creative juices came to an abrupt end when my cellphone caught a 4-bar signal and started dinging away, downloading all the emails and text messages that had been corralled in cyberspace for the past month.

As I perused my backlogged Instagram feed, I discovered that several of the chefs and restaurants I've written about in past columns had just won James Beard awards. The James Beard Awards are considered the Oscars of the restaurant world. The awards had just resumed after a two-year hiatus, due in part to the pandemic, but mostly in response to the organization's historical bias in favor of white male chefs. This year's list of award recipients had the long-deserved representation of female and BIPOC chefs (black, Indigenous, and people of color).

Mashama Bailey, of the Grey in Savannah, a black female, won the award for Outstanding Chef. I wrote about my experiences at her restaurant in the Dec. 2, 2021, Illinois Times. (https://www.illinoistimes.com/springfield/recipe-for-a-broken-heart/Content?oid=14421963).

Chef Katie Button's restaurant, Cúrate, won the award for Outstanding Hospitality. I wrote about my experiences there in Nov. 26, 2020. Illinois Times https://www.illinoistimes.com/springfield/turkey-tapas/Content?oid=12866627

My Instagram feed also informed me that Hmong Chef Yia Vang will be competing in Netflix's reboot of "Iron Chef: Quest for an Iron Legend." You can read more about Yia in the June 15, 2021, Illinois Times. https://www.illinoistimes.com/springfield/every-dish-tells-a-story/Content?oid=13815839

The last bit of culinary news revealed to me by my social media feed was the shortage of the popular hot sauce Sriracha. The California-based manufacturer, Huy Fong Foods, announced that it was stopping the production of Sriracha because of a crop failure of red jalapeno chiles due to climate change. Sriracha is starting to appear on Ebay as it disappears from grocery store shelves.

The original Sriracha is from Thailand. The Rooster brand we know in the U.S. is actually made by a California company founded by a Vietnamese-American immigrant. I've made my own Sriracha when I've had an abundance of Thai Bird peppers. The hot sauce recipe can be overly spicy, but if you prefer a milder sauce, you can blend in some red bell peppers.

Rinse the chiles and remove stems. Wear rubber gloves, and don't touch your face after starting to work with the chiles.

After removing the stems, place the red chiles on a cutting board and put them under the sun to dry and warm up for about half an hour.

Put the chiles into a mortar and pestle and start mashing. Be patient and continue to mash until all of the chiles are bruised and starting to look pulverized. Then add the garlic and continue to work everything together. Transfer to a blender and blend for about 2 minutes at relatively low speed. During this process, add the vinegar, salt and about half of the water.

Transfer to a saucepan and slowly bring to a boil. Add sugar and reduce heat and simmer until the sugar has melted. Start tasting the hot sauce and decide how you want it to taste. Add more sugar to make it sweeter, more vinegar to make it sour, and water to bring the heat down. Continue to simmer for about half an hour. Skim the foam from the top of the sauce. Run the mixture through a sieve to remove the seeds.

Let it cool, put it in a jar, and refrigerate. The flavor will improve with age.