Homeless in the heat

Marshawn Higgins, pictured right, is a resident of so-called tent city, a place where people seek shade, rest and shelter.

Marshawn Higgins, 52, lives in what's called tent city, on the corner of 11th and Jefferson streets in Springfield. He said a lack of support, whether from family, employment or social services, is why he and many others end up there. Higgins, a Chicago transplant, has no surviving family in Springfield and said he recently lost his job.

"You can't stop a bullet when it explodes, can you? A lot of these people are not here because of choices about things like drug use," Higgins said. "Homelessness was just a situation that happened. It wasn't anything I planned. I had come home from being confined in jail and after that it all started."

Higgins visited with Julie Benson on the morning of June 29 when she came to survey tent city, as she has most days for more than five years. She passes out food, clothes and hygienic products and checks on the dozens of people who live in the parking lot. "You've got to be able to fill in where they need it, if it's not an unreasonable request," Benson said. "It's not a life that most people would want to live. I try to help them live a little bit easier."

Since April, the building at 221 N. 11th Street, no longer owned by the Salvation Army, has been a site where those without housing have pitched tents, lacking other options. On a limited basis, the building serves as a cooling center. The Salvation Army on Clear Lake Avenue also serves as a cooling center, as do some city buildings during business hours.

Benson's charity, Helping the Homeless in Springfield, is a one-woman ministry. The building, which also serves as a warming center in the winter, is managed a few hours each day by a Salvation Army employee who allows residents of the parking lot to use some of the facilities.

Tent city can be glimpsed by motorists rolling westward along Jefferson Street, but is mostly out of sight. Springfield Police stopped by June 29 to question witnesses to a June 27 stabbing there that left two men in the hospital. The investigation was still underway as of July 2.

For months, representatives from the city and Salvation Army have discussed how to make the building fully operational. Jeff Eddy, a captain with the Salvation Army of Springfield, said Salvation Army and the mayor's office developed a two-year plan on how to use the facility as an overflow shelter. He said the goal is to direct people elsewhere, to places that can meet their individual needs. Eddy said the plan is part of the Heartland Continuum of Care (HCoC) – the Springfield body designated by the U.S. Department of Housing and Urban Development to develop and implement plans to deal with homelessness. 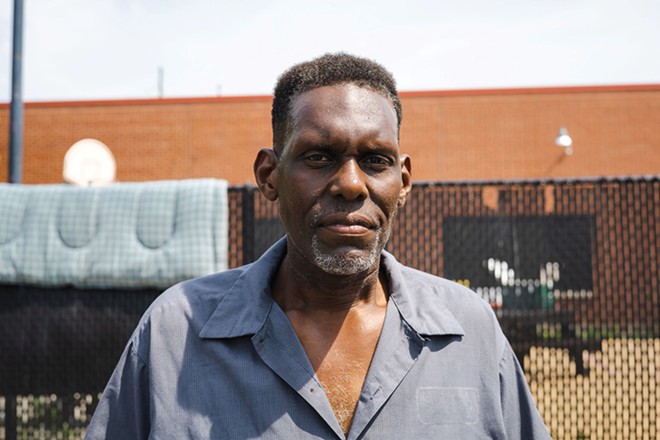 "That's really what we need, more than anything – that really specific plan, not just to get people off the street, but to get them into a better place," Eddy said. "Something that can be very public and transparent so people can see what the options are."

Turning the place into an overflow shelter is part of other efforts HCoC has undertaken to try to mitigate homelessness in Springfield said Josh Sabo, HCoC coordinator. "We want to encourage people to use the shelters we have in place, but the reality is we don't have enough capacity in the community and this overflow shelter would serve an important role for that," Sabo said.

HCoC obtained a $100,000 grant through federal pandemic relief funds for shelter-related costs, Sabo said. But to open and begin providing services in earnest, the city and the Salvation Army must work out an arrangement.

Mayor Jim Langfelder said the intention is to create a more permanent and lasting solution. "We have the financial resources, but it comes down to the experts to staff the facility and do it adequately," he said. "That's why, when we come to the council to ask for this, we are looking for a two-year commitment, because that's stability." On July 6, a spokesperson for the city wrote in an email to Illinois Times that the mayor wants to have the plan ready for the city council to review by July 20.

Ward 6 Alderwoman Kristin DiCenso said she wants a comprehensive approach to addressing homelessness in Springfield. She said a low-barrier or no-barrier shelter that's open 24/7 is needed. "These Band-Aids we keep putting on the problems of our unhoused people have become kind of a joke," she said. "We can't continue to give them just a cooling center, or just give them access to [the Salvation Army site] during the winter."

The clock is ticking for the people living in tent city, Benson said. She worries about whether decision makers will approve a plan in time to have the site fully operational by winter.

Higgins, the tent city resident, expressed frustration at the situation, and questioned why officials have yet to act. "I think they either don't understand or don't care."

Kenneth Lowe is a Springfield resident and a regular contributor to Paste Magazine.