Home is where the boss is 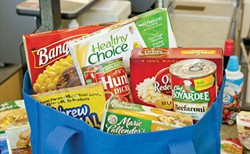 Well, looks like we got taken again by a big out-of-town jasper. The Omaha-based processed food giant Con-Agra – parent of Chef Boyardee, Swiss Miss and other take-in fast foods – is moving its 700-person corporate headquarters to downtown Chicago. The Tribune parroted the company line that leaving the firm’s suburban-style campus in Nebraska to move to Chicago “could help shake up a staid corporate culture that has a roster of ‘second-tier’ brands, like Hunt’s tomato ketchup and Peter Pan peanut butter, which are outperformed by rivals. I suppose it could. So could making better ketchup and peanut butter, but I learned in 36 years of writing about these guys that the simpler things are, the more confused they become.

You see, before 2014 I had spent 36 years writing about big-company management for business magazines, which left me knowing as much about that topic as I know about anything. Twice (most recently in 2009) I was asked by my editors to elucidate the mysterious process by which a company decides where to base its headquarters. Choosing the optimum sites for factory and retail stores is by now a science, but the usual dynamic interplay of labor costs, transportation access and tax environment were assumed to not apply to headquarters operations, or to apply in different, unfathomable ways. So I looked into it.

In the 1960s and ’70s, big companies began fleeing big-city downtowns. It happened in Chicago, when Allstate moved to Northbrook (1967), Walgreens moved to Deerfield (1975) and Motorola decamped to Schaumburg (1976). One of the more plausible arguments made for relocating was that suburbs offered better environments for raising kids, which helped attract young staff.

So the move to the suburbs made a kind of sense. But which suburbs? In almost every case, it was one close to the CEO’s house and favorite golf course. One of the experts I cited was Thomas Klier, now the senior economist and research advisor of the Federal Reserve Bank of Chicago. Noted Klier, “Executives’ vanity and insecurity, or the preference for a certain golf course,” Klier said, “do not enter either the formal models of location consultants or the empirical models of economic studies.”

No, but they do enter into the analysis of boards of directors. The first thing to remember about directors is that they exist to make the boss happy. The first thing to remember about bosses is that they exist so directors can make them happy. That is hard to do. Big-company CEOs are vain and they are over-confident of their own abilities and thus feel ever so entitled. In Manhattan or even in the Loop in the 1970s, a big-company CEO was one of many, and only one can be Biggest. Move to a very small pond like Deerfield, however, and that CEO’s croak becomes the only one that will be heard.

Then there is the problem of time. A CEO’s time, you see, is more precious than diamonds, and the less of it he wastes while being driven to and from his golf course, the better a country America will be. In the 1980s, William H. Whyte, the Fortune magazine journalist turned sociologist, charted the exodus of such Fortune 500 outfits as General Foods and IBM from Manhattan. Lo and behold, of the 38 companies that left the city in the period studied, 31 ended up moving to suburban sites close to their CEOs’ houses. Relocation analysis, Whyte showed, amounted to looking in a phone book. “Where does the boss live?,” he wrote. “That is where the company is going.”

Back to 2015 and Con-Agra. The move is the brainchild of the new Con-Agra CEO Sean Connolly. The man is reckoned as a business genius for having put the salt back into Campbell Soups, which nobody, I mean nobody, else would have thought of. Connelly lives in Winnetka, which for Downstate readers unfamiliar with the geography of Illinois’ greatest city, means that his new offices will be a 36-minute train ride and a two-minute cab ride from his hometown.

And you paid for the move. The Rauner administration extended state tax incentives to Con-Agra for moving the HQ 480 miles closer to the new boss’s house. Please note that only 300 of the 700 headquarters jobs will be imported from Nebraska; the other 400 come from Con-Agra’s existing office in Naperville. If Con-Agra canned Rauner’s offer of tax breaks to a firm with annual net sales around $16 billion while stiffing child care workers until his Illinois Turnaround Agenda is approved, Con-Agra wouldn’t be allowed to sell it. However, the tax credits suit Con-Agra’s turnaround agenda, and that’s the kind of deal Rauner can understand, even if anything as complex as government remains beyond him. CEOs are in this together. They remember, even if we forget, that it’s them against us.