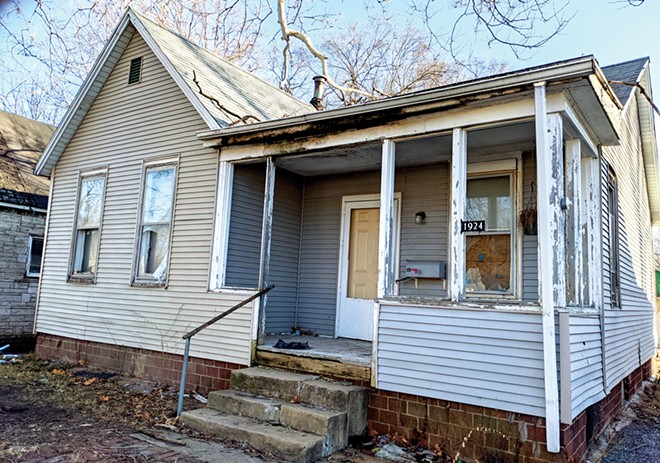 The Springfield City Council has approved the purchase of four uninhabitable homes with histories of code violations for more than $100,000. The purchase price for this one is $20,800.

At the same Dec. 15 city council meeting where someone dressed as Santa gave holiday greetings to council members who attended via Zoom, the council bought four houses on South Grand Avenue East.

It was a reversal from weeks leading up to Halloween, when council members balked at buying the same properties to make room for a promised rail overpass for which no construction money has been secured. The overpass would be built on the 19th Street rail corridor, about 10 blocks east of the 10th Street rail corridor now undergoing expansion.

Collectively, the four vacant houses have clocked 86 pages in code violations through the years for problems ranging from no garbage service to tall weeds to mattresses and other trash dumped in yards. City files also mention placards and someone once living in one of the houses absent electricity.

The owners, including Tien Thanh Do, who owns three of the homes, and Linda Do, who owns the fourth, told the city that they're facing medical and financial issues and so asked that taxpayers acquire their dilapidated homes now instead of years in the future, when the city hopes to start work on the overpass project.

That didn't fly last fall for Ward 3 Ald. Doris Turner, who voted to keep the Do purchase in committee while favoring the purchase of a home across the street that is in her ward. Luann Hickman, owner of the Third Ward house, got nearly $186,000, including money for moving expenses.

To compare that deal with the purchase of four uninhabitable homes for $106,000 would be to compare apples with oranges, Turner declared at an October council meeting when the deal in her ward went down. The houses across the street from Hickman's house, she noted, are in terrible shape.

"They aren't occupied, and nobody will ever be able to occupy them," Turner told colleagues last fall. "That's the main reason those properties were put back in committee."

It's not clear why Turner voted yes to the four-home purchase last month when she and her colleagues pulled the deal out of committee and approved it. She didn't explain her reasons when she voted, nor did she return a phone call.

In voting yes, Ward 2 Ald. Shawn Gregory, whose ward includes the four houses, said that the city can save money by buying the homes now instead of in the future: The properties, he said last month, might be revitalized and so would be worth more than they are today. Ward 5 Ald. Andrew Proctor, who last fall echoed Turner in concerns about buying uninhabitable houses with public money for an unfunded railroad overpass, tells me that he was swayed by that logic when he said yes to the deal in December. "What really got me to vote yes was someone said somebody else could acquire it and possibly renovate it and it would cost more," Proctor says. "You never know."

Gail Simpson, Gregory's predecessor on the council, calls rehab or redevelopment a longshot. "It hasn't happened," she says. "In other parts of the city, it hasn't happened. There's no will to do it."

I'm not sure that revitalization would be a bad thing, since money to buy property for the unfunded overpass is coming from state and federal sources. The neighborhood could enjoy fixed-up houses until construction is ready to begin, if ever, then the state and feds would pay acquisition costs. Now, the city will demolish the houses and keep grass mowed while forgoing property taxes and waiting for a construction timetable.

Ward 7 Ald. Joe McMenamin, who voted against the purchase, says that the chances of rehab are zero. The city, he says, wasn't forced to buy the homes. "There was no lawsuit threatened," he said. "It was just poor decision making."

Why, Simpson wonders, did the city buy the homes, and why did city officials allow the properties to fall into such disrepair?

"Why do you reward them (the owners) for continued bad behavior?" Simpson asks. "Because of all the ordinance violations, the city already should have those properties – they should belong to the city."

It is fair to ask, Simpson says, what message this might send to others along the 19th Street corridor whose land is needed for unfunded overpasses on Ash Street and South Grand Avenue East. Will property owners keep lawns mowed and garbage picked up and roofs maintained and siding painted and property taxes paid or might they skimp, banking on getting bought out sooner rather than later?