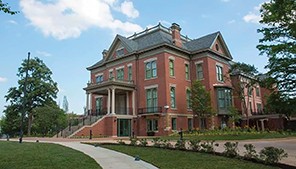 After being closed since early October for renovations, the Illinois Governor's Mansion will be reopened just in time for the holidays. Built in 1855, the Illinois Governor's Mansion is one of the oldest and most historic governor's mansions in the United States. The mansion serves as the official residence of the governor of Illinois, a symbol of leadership in state government and a world-class house museum. Soon after its completion, the mansion became the center of the Springfield social scene, and played host to weddings and holiday parties, and welcomed a variety of key figures in American history and culture including several U. S. presidents, Civil War generals, Abraham Lincoln's son Robert and Buffalo Bill Cody and Annie Oakley. Shortly before his nomination as the Republican candidate for president in 1860, Lincoln stopped at the mansion to visit and offer comfort to Gov. William H. Bissell, who was on his deathbed. Additional Governor's Mansion open house dates are Dec. 14 and Dec. 21. No reservations are required.

A play within a play