History on the block 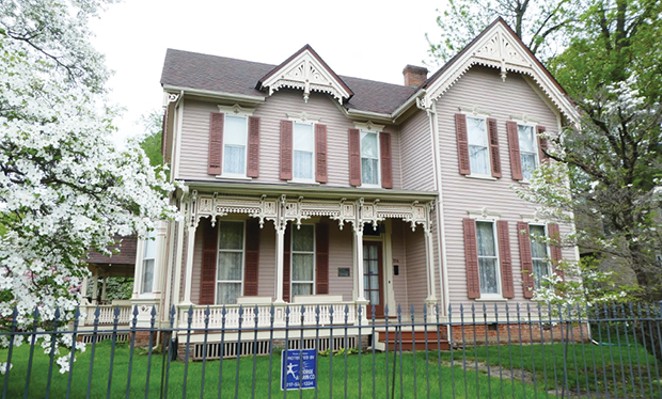 Built in 1878, the Freeman-Hughes home has been on the National Register of Historic Places for nearly three decades.

Springfield has fewer than three dozen sites on the National Register of Historic Places. One of them is hitting the auction block.

The Freeman-Hughes home at the intersection of West Monroe and South Walnut streets is stately in a subdued way, a place that still fits the neighborhood and has been lived in and loved over a lifetime that began in 1878, two years after Custer’s Last Stand and more than a century before current resident Mary Ann Langston bought it in 1984. She’s lived here ever since, but is moving to Arizona, and so the home and contents are scheduled to be sold on June 2.

With three bedrooms, a library and a dining room table with room for 20, it’s not a home for everyone, but it’s had extraordinary luck.

“I have an emotional attachment to the old place,” says Judith Barringer, whose parents bought the home in 1967. It was largely a leap of faith, she recalls. Her father, a physician, had written a book on historic homes, which attracted attention from Arthur Hughes, who owned the house. Failing in health and lacking in heirs, Hughes was a motivated seller, Barringer recalls, and he died shortly after the deal was made.  “He begged Dad to buy it,” she says. “Dad bought it sort of sight unseen. He’d really only been in the front room. The dirty laundry and everything was there when he walked in.”

Much of it still is. After making a few fixes, Barringer’s parents opened it as a museum to show how well-off folks lived in the Victorian age, and beyond. Beds and other furniture from long ago remain in the home, as does a carved radio cabinet made by Aston Cabinet Manufacturers in Chicago. “For those who are pleased by only the finest things,” reads an Aston advertisement in a brochure for a Roaring Twenties trade show. Cost isn’t mentioned, but luxury radio cabinets from other makers in the brochure are pitched for prices as high as $500, the equivalent of $7,500 in today’s dollars.

Barringer wasn’t necessarily impressed by furnishings while living in the house for a few years in the early 1970s, after landing a municipal library job in a city with a residency requirement. Her quarters were limited to a couple rooms and a bath while the rest of the home was open for tours. Her tastes back then leaned toward bean bag chairs. “I was a child of the 60s, I didn’t have much money,” she recalls. “I did have parties there.” Langston knows, even though she didn’t attend. “That’s the first thing people ask when they find out I live here: Were you at any of her parties?” she says.

For Barringer’s father, once president of the Sangamon County Historical Society, the house was a love affair that ultimately didn’t make sense. After he got the property listed on the National Register of Historic Places in 1980, an attempt to get it rezoned for office space failed, and Langston and her partner, Ed Schultz, now deceased, bought it, complete with contents. “It cost money and my dad was getting older and getting ready to retire,” Barringer says. “It’s sort of an expensive hobby to have.”

Langston says she spent two years scraping and painting after moving in, and the painting never has stopped, although someone else has taken over, tackling the job in phases, much like one would paint a suspension bridge. She’s also accumulated a large collection of gingerbread-style trim, brand new and stored in her basement, in the event original exterior trimwork, known in design vernacular as the Carpenter Gothic variety, should need replacing.

While the house lacks air conditioning, it has 11-foot ceilings, transoms above each door and an airy feel. It once starred in the society pages of the Illinois State Journal when Clarkson W. Freeman, who built the home, and his wife, Mary, entertained. “The beautiful home of Mr. and Mrs. Freeman was charming in its arrangements of ferns and cut flowers,” the Journal gushed in a 1907 piece about a party to mark the golden anniversary of Mary’s parents. “The spacious rooms where the guests were received were filled with beautiful flowers and trailing vines. Autumn leaves, typical of the autumn of life, predominated in the decorations throughout the house. The large staircase leading from the reception hall was completely covered with the golden and brown leaves.” The party was in March.

City directories show that Freeman made his living in the livestock transport industry, retiring 20 years after building the home. The couple had a summer home in Michigan, and Mary Freeman wintered in Florida, according to stories in the Journal, which inexplicably reported that Mr. Freeman died at home in 1927 and again in 1937, with the paper reporting the year of his death as 1917 when his wife died in 1928. Neither Barringer nor Langston report ghosts.

After Mary Freeman’s death, Hughes, a nephew, inherited the home and installed a series of tenants ranging from a home for transient girls to a candidate for the Springfield City Commission. Barringer guesses that fortunes may have shifted when the stock market crashed.

“I’m not sure exactly what happened,” she says.

Super sounds of the Illinois legislature