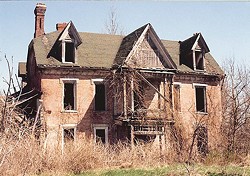 Doris Marbold Decker, 82, is looking forward to the Sixth Historic Marbold Farmstead Antique Show and Farm Fest on June 22-23. Tears well up in Decker’s eyes – and in all listening to her – as she expresses her appreciation for the work of the Historic Marbold Farmstead Association (HMFA). “It is wonderful to see that the house where my grandfather and my father lived is being saved. My father lost this house during the Depression. It is amazing what the association is doing.”

John Marbold immigrated to the United States from Germany in 1847, settling in Petersburg. In 1850 he bought land and built his brick home. He helped other German immigrants get a stronghold in the area, hiring men to help make bricks on site or work the farm. The farm passed to his son, H.H., who started the Greenview Marbold Bank, and later, in 1915, to his grandson, Benjamin (Doris Decker’s father). Benjamin had become the president of the Marbold Bank but lost his wealth – and his home – after the bank failed in 1927.

For years the house and land sat empty and fell into disrepair – the roofline sagged, windows had been broken out, brush covered the foundation, and the interior had been damaged by rodents and termites as well as looters who had ripped out fireplace mantels etc. Robert Hanson acquired the property in 1990 and began some restoration – adding windows, shoring up the floors, etc. His work was key for any future restoration.

In 2012 Hanson sold the farmstead to the Historic Marbold Farmstead Association, a nonprofit that had formed in 2011. The asking price was $78,500. Charlotte Wohler, president of the association, says, “Each of the 50 founders agreed to donate $1,000, and we actually exceeded that with $57,000 donated by the group. With a loan for the rest of the money needed, we bought the house and 10 acres. The association also was awarded a grant from Landmarks Illinois, who listed the Marbold estate in the top 10 most endangered historic sites in Illinois.”

The goal of the association has been to create a living history farm. Immediately after the purchase, members got to work to achieve their goal. They cleared out old farm equipment, cleaned up dilapidated buildings, added gutters and downspouts, fenced the property to keep out trespassers, and repaired the kitchen floor that had been eaten by termites.

“By 2014 – just two years later, we had paid off the mortgage,” Wohler says. The association has raised money through antique shows, garage sales, a quilt raffle, trivia night, food sales at farm auctions, a tea and style show, a brick campaign, a spring dinner and auction (recently held in April) and a comedy night, plus donations from businesses and private citizens. Wohler: “This house was here even before Greenview became a village. I grew up in Greenview and drove past this house often. This means so much to me personally.” 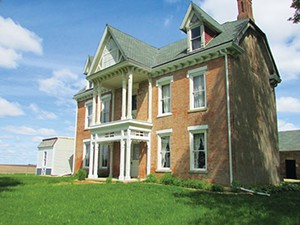 Photo courtesy HMFA
The Marbold house in 1990, and today. The restoration work so far has focused on structural and exterior repairs.
Lisa Schnell, HMFA board member, spends hours at the site. The day Wohler and others met mid-morning to discuss their work, Schnell had already been at the Marbold Estate for several hours, clearing brush and mowing. “A lot of the work we are now doing isn’t visible. We conducted the historic structure report which identified the need to shore up the house, work on diverting water from the roof, and add chimney caps,” Schnell says.

Much has been accomplished – the washhouse, dairy room, summer kitchen, carriage house and smokehouse have been rebuilt. A new roof has been installed and windows have been reglazed and restored.

The goal of a working history farm has been achieved although the association continues to add and plan more. Each May the association hosts Farm Day for Greenview students so they can learn the many aspects of past farm life. On one visit, students learned about old kitchen utensils and participated in grinding coffee, making butter and grinding corn. In the washhouse the association created an 1883 schoolhouse, and students learned what school would have been like. Students have learned how to care for horses, to shear sheep, make rugs and make sauerkraut.

There is still much work to be done. Emily Schirding, association treasurer, says, “We continue to raise money for many needed items. The summer kitchen and washhouse cost $90,000. We need to add plumbing and seal the house. Then we can do the interiors.”

Exterior work comes first so that the house is safe and sealed and interior rooms are protected. Donors have already designated money to be used on specific items such as furniture for rooms such as the parlor and conservatory. Some furniture has already been acquired. The Brinkerhoff Foundation donated the sofa, tables and lamps from the parlor when the Brinkerhoff House in Springfield closed.

The June 22-23 festival will include food and music, antique dealers (Saturday), a flea market (Sunday), demonstrations by period craftsmen such as a blacksmith and a potter. History about the Underground Railroad in the area will be presented. Visitors can meet Ulysses S. Grant, portrayed by Larry Werline. On Saturday, Dr. Mary Edwards Walker, a woman surgeon in the Civil War and the only woman to ever receive the U.S. Medal of Honor, will be portrayed by Linda Raphael.

The HMFA leaders are committed to focusing on getting the house back to its glory days and showcase its importance in the area as a working farm. Volunteers and donations are always welcome. “We hope people will come to our June event and enjoy what we have planned. Those who have visited the farmstead in the past will be pleased with all that has been accomplished,” Wohler says.

Cinda Ackerman Klickna of Rochester is a freelance writer, interested in local and state history.

Cinda Klickna is the Secretary-Treasurer of the Illinois Education Association.
More