HISO Music is moving on up 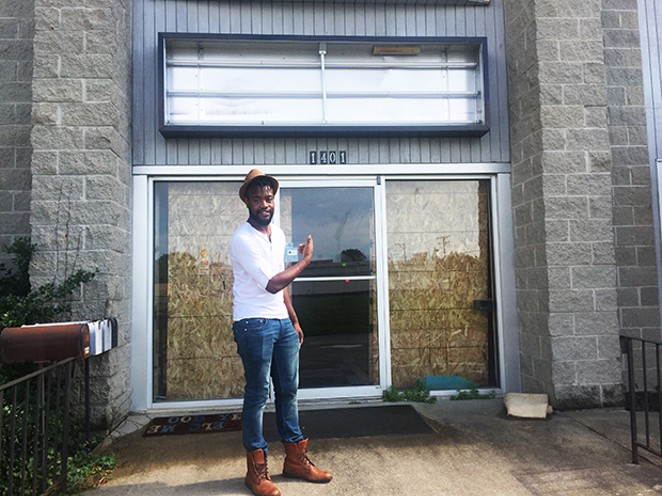 Photo by Scott Faingold
Ayo Abitogun of HISO Music at the entrance of his new space.
Since 2014, Springfield-based multiple-platform entertainment conglomerate HISO Music has been building its business steadily, to the point where it has started to feel growing pains. Now the company is preparing to open a new, self-contained complex at 1401 S. Fifth St.
The brainchild of relentlessly energetic and positive 28-year-old CEO Ayo Abitogun (see “The business of spreading music success,” IT, Feb. 9, 2017, at illinoistimes.com for more details of the company’s genesis), HISO has spent the past few years operating out of several locations, including its own recording studio in the Harvard Park neighborhood, along with the broadcasting facilities at community radio station WQNA and various photography and video studios throughout the region. The new building will bring all of this and more under one roof.

“In the old space we were starting to get on top of each other, so now we have many different departments with their own spaces,” said Abitogun. In addition to its own fully-functioning radio station – which currently produces 12 different radio shows – the new HISO building will contain a recording studio, a production department employing four producers, and a music talent agency representing 11 different musicians, vocalists and songwriters.

There are also plans for an ingeniously designed combination photography and video lab, with separate areas which can be easily converted for green screen, black screen and white screen usage. “The idea for sectioning off space for the lab was inspired by this large Airbnb loft I stayed in for a bachelor party,” he said. That loft was sectioned off using curtains, an approach the HISO space will mimic. “I’ll even be able to cut the room in half for two different screens to be used at the same time.” In addition to in-house use, the lab will be available for rent to the public. “We’ll have the lights and screens and editing equipment so small businesses and independent producers just have to bring their equipment. And if somebody has a project but isn’t a photographer, we have our own photographers who will do it for you.”

When Abitogun started HISO four years ago, he was working at Bunn-o-Matic (“bending metal and stuff”) but after the first year, he has made HISO his full-time job. Now, with the new building, things are coming to fruition in a big way. “This was always the dream – I always envisioned a facility like this. When you visit colleges or universities, you might see something like this but it’s not open to the normal person, to the public. When someone walks in here, I want it to be an experience.”

As for the secret of HISO’s success, Abitogun has a few guesses. “I think the reason I’ve been able to operate so long, and get as far as I have, is that I’m not just offering one thing. If you’re putting together a wedding, not only am I hooking you up with a DJ but I’m getting you the photographer, the videographer – if you need singers, I have that. It makes it a lot easier for the normal person to just contact one person instead of having to deal with multiple different vendors.”

In addition to entertainment production and promotion, HISO does advertising for local businesses such as Crow’s Mill Pub and franchises like J.D. Byrider and American Family Insurance. “We reach about half a million people a month.” The company has also been working with a nonprofit called Small Deeds Matter which puts together talent shows for all the high schools in town and also receives donated musical instruments which they then donate to elementary schools and other programs. In September, through the Boys and Girls Club, HISO staff will begin teaching kids how to operate a small recording studio being built for the purpose.

“I want people to see that a normal person can do this,” Abitogun said. “I didn’t sell drugs, I don’t have a rich family member.” The new building will open during the first week of August but his ambitions don’t stop there. He would like to open a franchise HISO in another city by December 2019, while continuing to operate in Springfield.

“I feel like I was never too good at anything – so if I can do it, you can do it,” he said with a laugh, “and probably a lot better than me! My goal is to help over a million people by the time I’m 30.”