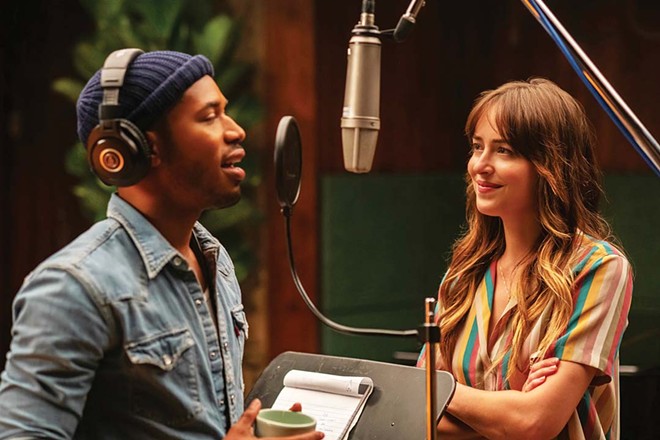 I'm going to take a counterintuitive approach to Nisha Ganatra's The High Note. As written by Flora Greeson, this is a formulaic romantic comedy that makes no bones about the fact that it's a formulaic romantic comedy. Be that as it may, I contend that it's a rather daring proposition to make something so predictable. Isn't it a challenge to try to make a story that's run way past its sell-by date seem fresh? When you stop to think about it, most films try to do this. If, as scholars say, there are only seven story archetypes, there's really nothing new to tell narratively. No, the challenge is to make the old seem new again, to create in the viewer such an ironclad suspension of disbelief, they think the story they're seeing has never been told before.

Ganatra and her cast manage to pull this off with The High Note, a movie that will remind you of others - 2013's Begin Again comes readily to mind – yet manages to find its own voice, thanks primarily to its sympathetic characters. The vibrant music certainly doesn't hurt as this deep dive into the modern pop music industry allows the talented cast to show their musical chops, whether behind a microphone or a guitar.

While Maggie's (Dakota Johnson) job title may be "Personal Assistant" she's really nothing but a lackey to pop star Grace Davis (Tracee Ellis Ross), making sure to cater to her every need. However, she has bigger plans for herself and her employer as she hopes to one day produce an album for her. Recognizing Davis as the pioneering artist she is and seeing that she has much more to offer than simply performing her greatest hits again and again in concert, Maggie's eager to provide her a venue to do so and prove herself in the process. This, of course, is easier said than done. Having no professional producing experience and no way of getting any, this is an uphill battle for Maggie and though she approaches Davis's manager Jack (Ice Cube) for a chance to do so, she's shot down immediately, as he's more than content to have his cash cow do what she's done best, pushing for her to take on a 10-year residency in Las Vegas.

However, a chance meeting between Maggie and singer David Cliff (Kelvin Harrison Jr.) proves fortuitous for them both. Seeing past his rough edges, she sees a young man with genuine talent and she convinces him to allow her to produce his first album. What they create in the studio is distinctive and fresh and Cliff is sure to be a big star...that is, if he can ever get a chance in the spotlight.

The chemistry between Johnson and Harrison is palpable, so much so that if they were to make another movie or three, I wouldn't mind. Their rapport is natural and electric, the two actors effortlessly playing off one another in such a delightful way, you long for them to be together. Equally effective is Ross as the demanding singer Davis. That the actress' mother is Diana Ross comes as no surprise, as she effectively channels her inner diva to bring an authenticity to the star's demanding behavior.

There is a major plot twist during the third act that will be a point of contention for some. To be sure, it's a bit hard to swallow, but by the time the big reveal occurred, I really didn't care whether it was plausible or not. I was so charmed by Johnson and company the improbable the turn-of-events didn't bother me. I was thoroughly entertained by that point, and isn't that what a successful movie should do?