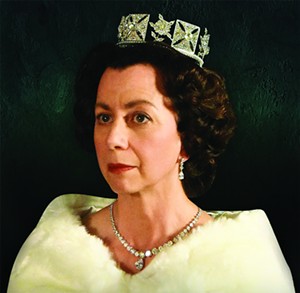 Photo by Chuck McCue
Her Majesty the Queen played by Mary Young.
For the many fans of the Netflix series The Crown – and for anyone wondering just how good theater in Springfield can get – Spencer Theatre's production of The Audience, playing through the weekend at the Hoogland, is a must-see.

The Spencer, with Julie Staley as producer, launched pre-lockdown with Blithe Spirit. As we continue our struggle with the pandemic, The Audience is a welcome gift. It's a play about personal sacrifice, service to others and power politics that is remarkably enjoyable and deeply touching.

It's a memory play, an informed but imagined look at history. It's the story of a young girl fated for great things, and her older self who happens to be "Elizabeth II, By the Grace of God of the United Kingdom Queen and of Her Other Realms and Territories, Head of the Commonwealth, Defender of the Faith."

The true "realms" of the play are their inner lives. The "territories" are the high-stakes struggles between a woman held in great esteem but possessing no real power and the various prime ministers who have served during her nearly seven-decade reign.

The structure is deceptively simple. A series of speculative peeks into the confidential, every-Tuesday meetings between the monarch and her prime ministers. No records are kept, but playwright Peter Morgan has a genius for this meticulously researched but fanciful form of drama. From Frost/Nixon to The Queen to Bohemian Rhapsody (about another famous "Queen") to his best-known creation, The Crown (based on this play), his style is accessible, plausible and endlessly entertaining.

As the queen, Mary Young gives us a royal night out. The story is told non-chronologically, with an intentionally fragmented portrait of Her Majesty, but in Young's hands it is a full-bodied one, full of strength, self-doubt and especially wit. Avoiding mere impersonation, she focuses on the inner life.

Aging from 25 to 86, Young embodies change with modulations of voice and demeanor, facilitated by rapid costume changes (I lost count at nine or ten). The period-perfect costumes by Rene Blank are fabulous. James Lathim is the capable wig master.

All dramatic depictions of monarchy, from Shakespeare's Henry V to The Crown, are studies of solitude, an idea that resonates in the imagined interactions between the queen and her younger self. Mary Donathan is touching and affecting as the young princess, struggling with her loss of freedom, while the mature Elizabeth focuses on responsibilities. Nancy Cole is fine as Bobo, Elizabeth's nurse and companion. Donathan is especially impressive in the wartime radio address the 14-year-old made to the children of the Commonwealth. And yes, there is a charming and well-trained Corgi onstage.

Our guide is a droll Equerry (the delightful Jim Dahlquist) hilariously describing etiquette, history and the decor of Buckingham Palace.

The terrific Rich McCoy captures the iconic essence of Winston Churchill. When the young queen raises questions, she is told to shut up and listen. But Elizabeth is savvy enough to use the ailing Churchill's precarious political situation to her advantage.

Troy Kemp is elegantly deceptive as Anthony Eden, destroyed by the mid-50s Suez Canal fiasco. The queen tries to stop Eden's misadventure, which ended the illusion that Britain was still a superpower.

She has a similar reaction to Tony Blair five decades later. Greg Floyd is an unctuous Blair, the shining star of the 90s "Cool Britannia" era (and the subject of Morgan's The Queen, about the death of Princess Diana). She sees through his lies on the eve of the 2003 invasion of Iraq, equating "nation-building" with neo-colonialism.

The queen's role varied. She plays therapist to Gordon Brown – the touching Chuck McCue – who suffered from depression.

The big showdown is with "Iron Lady" Margaret Thatcher. The very fine Cynda Wrightsman captures Thatcher's hollow soul. She berates the queen, who supports sanctions against apartheid South Africa. When Thatcher reveals that her son is doing business there, the queen's reaction is priceless.

John Major (Patrick Foster), an anti-monarchist hounded by the tabloids, reports Princess Diana's scathing views of the queen. Yet, like all the others, he needs her support.

The queen says, "It is my duty not to have preferences," but she befriends the rough-hewn Labor leader Harold Wilson. Dennis Rendleman gives a great performance, a closet monarchist who hits it off with the royal (perhaps) closet lefty. Rendleman and Young are heartbreaking when he reveals Wilson's Alzheimer's diagnosis.

The octogenarian queen nods off as David Cameron (the amusing Mike Krcil) recaps a European summit. But he sums up, "You have a way of saying nothing, yet making your view perfectly clear."

And that sums up Mary Young's compelling performance. She gives away little of the queen's political views, yet reveals much we long to know about Her Majesty's heart, and yes, even her soul.

The Audience is at the Hoogland (217-523-2787) Friday and Saturday at 8 and Sunday at 4. Tickets are limited due to distanced seating and playgoers will be asked to wear masks.

Dennis Thread is a freelance writer and director in theater, film and corporate communications. dthread@creativethread.com