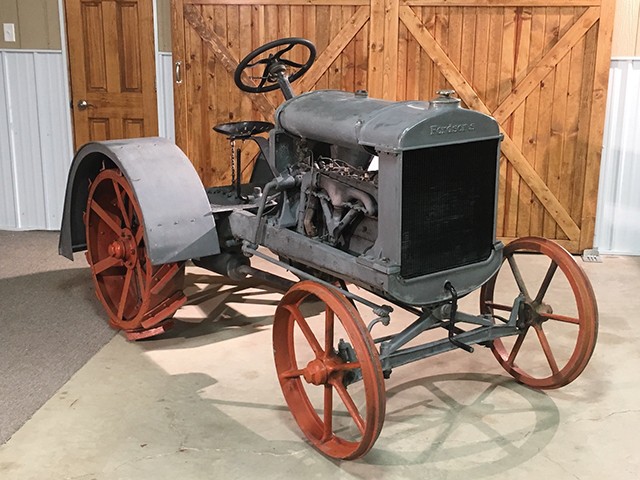 Henry Ford revolutionized both the automotive and the agricultural industry by producing affordable and reliable products for consumers. The Ford family is a piece of Americana and a part of that iconic history is going to be auctioned at Aumann Auctions Pre-’30 Auction on April 13. A hand-built 5/8 scale Fordson tractor commission by Henry Ford himself and personally built for his grandchildren will sell.

When auctioneer Kurt Aumann received a phone call from a man who had a small tractor he wanted to sell, at first this didn’t seem different from the usual tractors consigned. “That soon changed,” Kurt said.

As soon as the caller said his father bought it from the Henry Ford Museum auction in the 1980s and he has all the paperwork, Kurt said, “Everything was different.”

The story behind the tractor takes place at the Henry Ford Estate named Fair Lane in Dearborn Michigan where Henry Ford lived with his wife, Clara. It was 1925 and Henry Ford asked his special projects design engineer, Howard Simpson, to design a miniature tractor for his grandchildren. The tractor would be part of a small working farm Henry and Clara had built for the grandchildren.

Henry Ford wanted the tractor to be approximately 5/8 scale to fit a 10-12 year-old-boy. Kurt Aumann explained, “Simpson and Gene Farkas, an engineer responsible for much of the Fordson design, built this tractor out of Model T, Fordson and specially designed and cast parts. It even has a 5/8 size specially designed cast iron seat.” It became part of the reduced size set of farm equipment for the grandchildren and was displayed at fairs. The four grandchildren were the sons and daughter of Edsel and Edith Ford and were named Henry II, Benson, Josephine and William. Collectively they were referred to as Hy-Ben-Jo-Bill.

Kurt said the miniature Fordson is in “super-good shape” and that it has not been used much. Besides being at the Ford home, it was featured for many years in the Henry Ford Museum and before that for three decades in a private collection. The collector obtained the tractor after buying it in 1982 from the museum’s inventory-reduction auction. The collector provided documentation proving the authenticity of the tractor.

To learn more about this historic tractor, go to AumannVintagePower.com, or contact Kurt Aumann at Kurt@AumannAuctions.com or 888-282-8648.  –Cindy Ladage