Location on South Dirksen would require transporting users from downtown 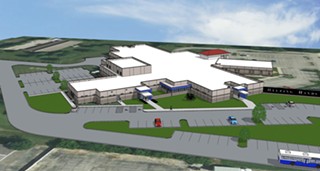 PHOTO COURTESY SANGAMON COUNTY
Helping Hands of Springfield’s emergency and transitional shelter would move from its current downtown location to a larger site more than three miles away through a proposed partnership with Sangamon County government that both Helping Hands and county officials view as a step forward in reducing homelessness.

Vacant space at the county’s complex at 2201 S. Dirksen Parkway on Springfield’s east side would be renovated with $5 million from the county’s share of federal American Rescue Plan funds and open about a year from now, Helping Hands Executive Director Laura Davis told Illinois Times.

The plan calls for the county to buy the current Helping Hands building at 1023 E. Washington St. – with an appraised value of $275,000 – with county tax revenues. The county would tear down the building, and in its place construct a permanent home for the county’s Sangamon/Menard Area Regional Transit (SMART) program with about $500,000 in expected state grant funds, according to County Board Chairman Andy Van Meter. Helping Hands would use about 20,000 square feet of currently unoccupied space in the one-story, 48,000-square-foot building on Dirksen Parkway, which currently houses the Sangamon County Juvenile Detention Center and Regional Office of Education.

The new site would provide some, but not all, of the expanded services envisioned by Helping Hands through its former plan to establish a Center for Health and Housing in the 500 block of South 11th Street. That plan fell apart in 2019 amid resistance from nearby residential neighborhoods and the Springfield chapter of the National Association for the Advancement of Colored People.


Advocates for the homeless have dealt with “not-in-my-backyard” arguments involving the South 11th Street site and at least four other locations near downtown and on the city’s north and east sides since 2006. It doesn’t appear that the new proposed site on the east side would face widespread opposition from the mostly commercial and industrial businesses near the property.

Teresa Haley, president of the Springfield NAACP chapter, said her group isn’t opposed to the new site. “It’s basically on the outskirts and not near residential neighborhoods,” she said.

Helping Hands provides 50 shelter beds for adults and other housing-related services at its 12,000-square-foot building at 1023 E. Washington St. in Springfield.

The new space would accommodate the 50 emergency and transitional shelter beds, as well as offer limited space for homeless families – a new option. There would be more space for caseworkers and expanded Helping Hands services to promote permanent homes for the homeless, she said. The space also would provide a permanent home for Springfield’s overflow shelter, which is operated by the Salvation Army out of its former Adult Rehabilitation Center at 221 N. 11th St. That shelter serves between 40 and 90 adults a day.

Officials said Helping Hands is working with the county and Sangamon Mass Transit District to arrange for the transportation of clients to and from the new site – about 3.5 miles to the southeast of the current Helping Hands headquarters. The trips, which could be available during the day and at night, would be free to clients.

Van Meter said other cities have successfully used transport services when the places homeless people frequent weren’t nearby. He expects the County Board to approve a contract with Helping Hands.

SMTD Managing Director Steve Schoeffel said in a news release that SMTD is “committed to working with all those involved to meet the transportation needs of the new location. We have had several productive internal and external discussions, and I am confident there is a way for SMTD to assist.”

The proposed new site is on the west side of a busy four-lane highway with no sidewalks. It is across the road from the Illinois Department of Transportation headquarters.

Ward 3 Ald. Roy Williams Jr., in whose ward the new site would be located, said he wishes a site had been chosen in another ward, because the east side already is home to numerous social-service agencies and housing sites for low-income and formerly homeless residents.

But because of a lack of opposition from the site’s neighbors – at least so far – he said the location “is not a problem for me personally. … The impact on my ward is very minimal.”

A single site for Helping Hands’ services to homeless people would make it easier to offer and coordinate a variety of medical, counseling, employment and logistical services so clients could enter temporary and then permanent housing quicker, Davis said.

“Fewer people will fall through the cracks,” she said.

Sangamon County Board members are expected to vote on a possible no-rent contract with the nonprofit in December or January. The project also would need a zoning variance and approval from the Springfield City Council for a conditional permitted use.

The Springfield Planning and Zoning Commission is expected to consider the county’s zoning requests Dec. 21, with City Council members to take a final vote on the measures Jan. 17.

Major Jeff Eddy, corps officer for the Salvation Army in Springfield, said the proposal is “what we need” to address the needs of the unhoused more effectively. He said he is confident the transportation challenges can be worked out.

The proposal fits within the goals outlined in the new strategic plan for addressing homelessness in Sangamon County, according to county and Helping Hands officials.

“Our strategic plan provides a foundation for our community to build an effective system to address homelessness,” said Josh Sabo, coordinator for the Heartland Continuum of Care. “Other communities our size have used similar strategies to reach ‘functional zero.’

“Many significant needs are identified in the plan, including the need for more effective housing-focused shelter services and additional day services,” he said. “This proposal by the county and Helping Hands would address significant shelter needs while also delivering services to link people to housing opportunities.”

Van Meter said the county learned about a year ago about the possibility of state funding to build a SMART headquarters that would include garage storage for SMART vans, a waiting room for clients and a break room for staff.

Vacant space is available in space designated for the Juvenile Detention Center because the building was completed in the 1990s, and since then, juvenile-justice sentencing guidelines and reforms nationwide have moved away from pretrial detention and toward probation and neighborhood-based rehabilitation, Van Meter said.

Helping Hands continues to work on more permanent housing options in Sangamon County, Davis said. She noted that the agency’s services would be moved to Dirksen Parkway about the same time 22 west-side apartment units for formerly homeless people are completed.

Park Avenue Residences will be built with almost $6 million in state and federal funds at 3526 S. Park Ave., in Springfield’s Ward 7.